What Would Happen If We Took a Problem Apart and Put It Back Together?

Ben Blum-Smith's challenge to, "describe and (jargonlessly) name concepts for thinking about task design" got me thinking about an activity my colleague Shannon and I tried last year with our fourth graders.
After watching Dan Meyer's TED Talk  Math Class Needs a Make-Over, I couldn't get out of my mind the part where he shows a problem from a text book and then visually strips away all the elements until he's down to the graphic.
What would happen, we wondered, if we took apart a problem like that and then asked the kids to put it back together?  We decided to take a grade 4 PARCC prototype, remove the question and some of the information, and present it to the kids as, well, just what it was: an incomplete question. 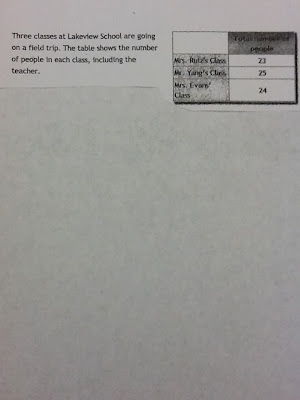 We asked them to imagine what the question might be.  They brainstormed some ideas in their notebooks, and then got together in groups to put down some of their questions on chart paper.  Some were basic and pretty much what we expected.  But many were complex and needed additional information, supplied by the kids, in order to solve.  This was something we did not anticipate, but once it started the floodgates opened and all this math just started pouring out!

Next, we gave them the same problem, but with the rest of the information.  Still no question. 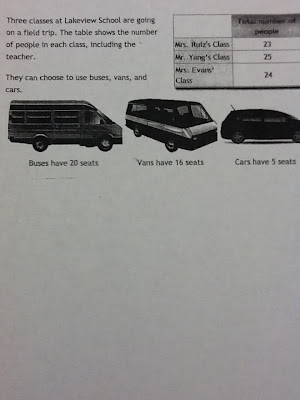 Again, they were asked to take a guess as to what the question might be.  They started getting closer.

Again, we were surprised at the complexity of the questions.  There was a high level of engagement; as long as they didn't have to figure anything out they thought they were getting away with something!
Finally we gave them the whole thing: 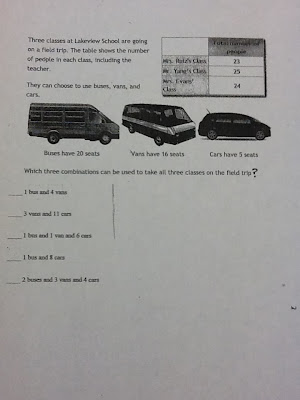 Then we realized we had this whole pile of really interesting questions, and that it would be a shame for them all to go to waste.   And even better, they were kid questions!  We did some culling, made sure there was variation in the problem content, and that there were some easy, medium, and hard ones.  We taped them all around the room, and told the kids to spend a few days looking them over and thinking about which ones most interested them.  We then put big sheets of construction paper and some pencils and markers under each question and let them have at it.  Some kids wanted to solve the problems they had written, others were interested in solving ones their friends had written.  Interestingly, some questions could not be solved because the authors had not included enough information.  Those had to be revised.
When all was said and done, we agreed that it was a very productive problem-solving experience.  It had a low barrier to entry, it scaled both horizontally and vertically, and had a high engagement level.  Shannon and I agreed that one of the reasons for that was because of the student-centered nature of the project.  The questions were created by the kids, and they had freedom to decide which ones they wanted to tackle.  Kudos to Shannon for turning her class into a "math lab" and for using the lesson again this year with a new group of fourth graders.  Any help with a name to describe this activity?
Posted by Joe Schwartz at 4:33 PM