When he told me that a square could have wiggly lines and 72 degree angles, I felt a panic attack coming on.  Dizziness, increased heart rate, a gnawing sense of dread mixed with a strange giddiness.  I mean, if that were true, if a square could have wiggly lines and 72 degree angles, then what else might be possible?  There are certain unshakable pillars that hold the world in place, and one of them is that a square has straight sides and 90 degree angles.  But the guy holds a Ph.D. in Mathematics, with expertise in Geometry, Topology, Discrete Mathematics, and Combinatorics.  He is a professor at the University of Arkansas.  He's co-authored research like Intrinsic Defects, Fluctuations of the Local Shape, and the Photo-Oxidation of Black Phosphorous.  He's the Academic Director of the Epsilon Camp.  And, along with Alex Bellos, he's co-authored Patterns of the Universe.  So when he says that a square can have wiggly lines and angles of 72 degrees, who am I to argue?


For my morning session at TMC '16, I chose Tessellation Nation.  There were several other interesting options, but the temptation of spending 6 hours over 3 days playing in the Triangleman's sandbox, in his Minneapolis backyard, was too hard to resist.  We would be given the freedom to explore whatever we wanted, for however long we wanted, with whomever we wanted. All Christopher asked was that we start with a question or goal, no matter how vague or obscure. Fortunately Max went before me, and I adopted his:

When does play become math?

Edmund Harriss brought along some laser cut shapes for us to explore, and told us that if we put them together we could make a ball.  I had seen Edmund present a My Favorite at TMC '15, and knew him as the co-author of the brilliant book Patterns of the Universe.  But I hadn't had the chance to meet and get to know him, and the shapes looked cool, so I dropped the turtles and, along with Bryan Anderson, jumped in.

Then he gave us another project to work on.  He told us that if we put the shapes together in just the right way, we could create a cool tessellation that would ripple.  He explained that, around any vertex, we would need to alternate 2 triangles, a square, another triangle, and then another square.

He pointed out a shape that had 4 wiggly sides:

Me: But that's not a square!

Edmund: The most important thing I learned getting my Ph.D. was to be flexible.  I had to learn how to bend myself around the math.  In order for us to talk about what's happening here we are going to call this shape a square.

Me: Not for nothing, but it sounds like you're bending the math around yourself!  But I'm over it.  A square it is!

I felt an exciting sense of liberation.  Math, which had always seemed to me to be a rigid, inflexible, no nonsense, no talking back, no coloring outside the lines set of arbitrary and infuriating rules and regulations, suddenly had become, in Edmund's hands, something to play with.   In my hands it was lifeless.  In Edmund's, it was art.  I was finally beginning to understand what all the fuss was about.
Edmund explained that what we would be creating was called a uniform tiling with curvature.  He said that to understand what was happening mathematically we would need to use something called Differential Geometry, which is calculus in several dimensions.  He said the equations would be quite complex.

My Problem With Word Problems

From Mark Anderson via a tweet from John Golden: 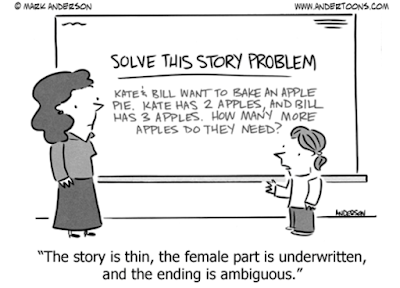 I've spent a lot of time, and I know I'm not alone, helping struggling students find effective strategies to solve word problems.  Because so many of these students also read below grade level, much of that help is centered around improving comprehension.  After all, word problems are pieces of text, right?  Don't we also call them number stories?  It makes sense to locate the problem in an inability to fully understand what's happening in that text.
Well yes, but there's more to it than that.  A comment thread on a post I published on this topic, along with an e-mail exchange with a colleague, has me reflecting on my own experience as a student.  I was, and remain to this day, an avid reader.  Reading (and writing) came easy to me.  My struggle was always with math.  So what was my excuse?  How come I had so much trouble with word problems?

Here's a typical example of a word problem, taken from our grade 4 curriculum:

This piece of text wasn't written to inform, entertain, provoke, or enlighten.  It exists for one reason: to get kids to do math.  It was written to meet a standard, which makes it, by definition, contrived.  There's a subtle gesture towards kids; all kids like animals, right?  It does tell a story, but as a story it's neither compelling nor engaging. As a reader, I have no interest in what's happening.  Perhaps if I had been helped to feel the devastation of the storm, the thunder and the lightning, the sheets of rain, the flooding, the downed trees and wires; perhaps if I had been made to sympathize with the heroic attempts of the shelter staff to find homes for the poor animals, sweating in the heat with no air conditioning (or are they freezing in the cold with no warmth?), barking and meowing with fear in their dark cages, food spoiling in the refrigerators...perhaps then I might have cared about how many dogs and cats the Wyn and May shelters took.  I'm exaggerating of course, but couldn't the author of this problem made at least a small attempt to reach out and touch me?  As it is, I've given up long before I've reached the question. 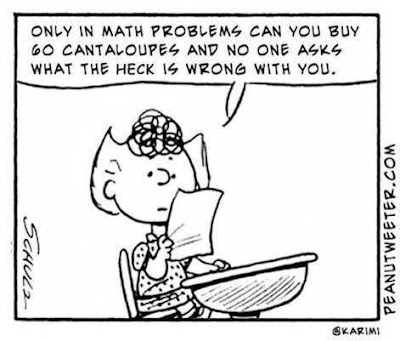 Robert J. Tierney and Jill LaZansky have written about the existence of, "An implicit contract between author and reader--a contract which defines what is allowable vis a vis the role of each in relation to the text."  They write:
"It seems reasonable to suggest that authors have a responsibility to their audience--a responsibility which necessitates that written communication be relevant, sincere, and worthwhile.  An author must predict the intentions and background of his or her audience.  If the author's predictions do not mesh with the reader, then the text the author has written may be deemed by its readers irrelevant, insincere, uninformative, ambiguous, or obscure; and it is likely the contract will be voided.  Symptomatic of this void, readers will likely criticize the author for being ambiguous, express an unwillingness to address the author's message, or misinterpret what has been written.  It is as if the reader would posit that the author has violated the terms of their contractual transaction."

Do the authors who write word problems for textbooks and standardized tests have a responsibility to their audience?  If they expect students to make good faith efforts to engage with their texts, is it reasonable to ask them to hold up their end of the bargain?  I wouldn't have been able to articulate this as a student, but as an adult reflecting on my own experience as a math learner, and as a teacher who has spent countless hours trying to help students navigate their way through number stories, I feel a rising sense of anger and frustration when I read problems like the one about the River Forest Pet Shelter.  Most students do not have the voice to criticize it on its own terms as a failed piece of writing, but many will react, as Tierney and LaZansky observe, by being unwilling to address its message (shutting down), or by misinterpreting what has been written.  As a student, I did both. 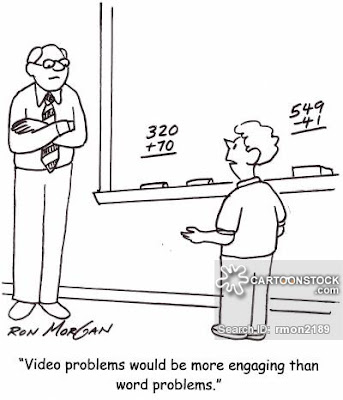 The MTBoS project endeavors to repair this contractual void.  What is a 3-Act if not an attempt by its author (teacher) to create a compelling narrative?  More than that, it offers an opportunity for the reader (student) to participate in the telling, making the author and reader partners in the construction of meaning.  In a good 3-Act, students may not always arrive at the correct solution, but they are rarely at a loss to understand what it is they're being asked to find, and, more often then not, they are eager to engage in the task.
The problem I had with word problems had nothing to do with literacy; I was a good reader with good comprehension skills.  I'm not saying that if they had been written with more craft and style that I would have been able to solve them, or even know what to do.  But at least I would have gotten to the question.