My first year teaching was both the most difficult and the most exciting of my career.  The workload was staggering and the learning curve was steep, but every day was a new adventure and the thrill of finally having my own class took a long time to wear off.  Looking back, I'm not sure who learned more, me or my students.  Here are three valuable lessons from year one:

I.  The Gym Teacher

Mr E, the gym teacher, was on the back nine of his career.  When I first met him he seemed hard-edged, like something bad had happened to him in his past that he couldn't quite get over and was still bitter about.  His size didn't help; he was a barrel-chested 6'4", 250 lbs, so he cut quite an intimidating figure.  I didn't have much interaction with him, just dropping my class off for gym and picking them up, all hot and sweaty, 40 minutes later.
One day, early in the year, a kid came back to the room from gym class in tears.  Mr E, she said, had yelled at her.   I could believe it-- I had occasionally heard his voice boom out from the all-purpose room as I walked to and from the office.  She said she was scared of him and didn't want to go back to gym class.  I tried to console her, but she was adamant.  She did not want to go back to gym.
What to do?
At that point in my couple-of-months teaching career, the person I felt most comfortable with was my principal.  He had hired me, he was incredibly supportive, and he had told me to feel free to come to him with any problems, that his door was always open.  And, to be honest, I was also a little scared of Mr E.  So I told my principal what had happened, and he told me he would take care of it.  Rookie mistake.  You can guess what happened next.
The next day Mr E cornered me.  Have you seen the episode of The Office when Stanley yells at Ryan?  That's kind of what happened.  He got up close, and respectfully but forcefully explained that if there was a problem I should have come to him directly.  I told him I understood, and that it wouldn't happen again.

Lesson: If you have an issue with a colleague, go to the colleague first.  Don't run to the principal every time you have a problem.

Addendum:
Mr E was still teaching gym some years later when I became our school's union rep.  (I guess he decided to play 27 holes.)  In the interim I had gotten to know him a little better.  (Did he remember what had taken place between us?  After that day we had never spoken about it.)  In the middle of some very contentious contract negotiations, each rep was tasked with organizing their building's staff for a job action.  I knew this would be difficult, as we had several staff members who were skeptical, if not outrightly hostile.  Although I had prepared a rousing call to action, including a call-back to the time, only a few years prior, when district teachers were jailed for going on strike for the better wages and working conditions that the current staff was enjoying, I was afraid that there might be an exodus during the presentation.  Whether or not they ultimately supported the job action was their decision, but they were darn well going to listen to what I had to say.  So I asked Mr E to stand by the closed faculty room door.  He filled up practically the entire frame, and stood there for the entire meeting with his arms folded against his chest.  If anyone was going to leave, they were going to have to get by him.  No one left.  Thanks, Mr E!

Nathan was one of those kids who could never seem to pull it all together.  Think Pigpen from the Peanuts comic.  Shoelaces untied, breakfast all over his shirt, nose constantly running.  It wasn't a matter of neglect; he came from a very loving and attentive family.  He was just one of those happy-go-lucky kids who always seemed one or two beats off.

His desk was a reflection of his personality.  I mean it was a total disaster area.  No matter how many times I made him clean and organize it, it instantaneously reverted back to its natural state.  Everything was just jammed in there: textbooks, notebooks, stray worksheets from months back, crumpled old tests never taken home to be signed, broken pencils, crushed crayon boxes, dried out markers with no caps, weeks-old half-eaten snacks, little toys... that was Nathan's desk.

(This was the opposite of Amanda's desk, meticulously organized with every single thing in its exact place.  She loved to color, and had one of those big boxes of Crayolas, one of those 64 packs.  One day I noticed that, while most of the crayons were worn down, there were a few select colors that hadn't been touched, their points still sharp.  I asked her why she didn't use them, and she told me that they were her favorite colors, and she didn't want to wear them out.  I've never met a kid with so much willpower!)

Anyway, back to Nathan.  What infuriated me most was how long it took him to find something.  Waiting for him to excavate his math message book from his desk was like waiting for Godot-- and meanwhile my lesson was being held up.  And then once he found it, forget about finding a pencil to write with.  One day I lost it.  After waiting for what seemed like an eternity for him to get what he needed to start the lesson, I stormed over to his desk and just tipped it over.  No words.  Everything in the desk came crashing down onto the floor.  The class froze.  Nathan looked down at the pile of rubble, looked up at me, and burst into tears.  I immediately understood that I had screwed up.  I publicly apologized, and believe I was able to repair my relationship with Nathan, but I've never forgotten the look on his face.

One afternoon, craving a treat, I opened my bottom desk drawer intending to dip into my hidden supply of candy. (Yes, I have a secret sweet tooth.)  Imagine my surprise when I found that an entire bag of Halloween candy had disappeared.  I was crushed.  I took it personally.  One of the kids in my class was a thief and had no compunction about stealing something from me.  What had I done to deserve it?
I gathered the class together and said all the usual things you might say in that situation: Confess and you won't get in trouble; it's more important to tell the truth; whoever did it can talk to me privately and no one else will know, etc.  Didn't work.  No one came forward, either to admit to the deed or to rat someone out.  The case remained open.  For the rest of the year it bothered me knowing that there was a kid in my class that would steal something out of my desk.  Who was it?
Fast forward about 10 years.  I come into school one spring morning and find a note on my desk.  It's from a former student, Damien.  I don't have the note, but I'll paraphrase:
Dear Mr. Schwartz,
You may not remember me, but I was a student in your second grade class.  I'm a senior in high school now and am going to graduate next month.  I just want you to know that it was me who stole the candy, and I'm very sorry that I did that.
Signed,
Damien
Damien!?!  Of course I remembered Damien!  So he was the culprit!  And he'd been carrying this guilt around all these years.  What caused him to finally come clean?  I sent a note back to him through inter-district mail, saying of course I remembered him, thanking him for his apology, letting him know that I though it was a courageous act, and wishing him well in his post-HS endeavors.
Lesson: Who your students are now are not who they'll always be.
The events described above happened 35 years ago, as far away from a first year teacher today as someone who taught in 1951 was from me my first year.  Looking back, I'm not completely sure that I would've thought someone from 1951 would've had anything to teach me about teaching.  I was young and full of myself.  Wasn't I up on all the latest trends?  Hadn't education changed dramatically from 1951 to 1986?
Hasn't it changed dramatically from 1986 to 2021?  Yes, notions of pedagogy and best practices have changed, and technology has revolutionized many aspects of what we do in the classroom.  (My 1986 self had high, middle, and low reading groups reading out of basal readers and completing worksheets I ran off on a ditto machine.)  But what hasn't changed, and what will never change, is that our project is a human one.
A school is more than a building, more than the sum of its chairs and desks and whiteboards and Smart Boards; more than all its books and tests.  A school, even a virtual one, is an intersection where lives converge, where our lives, and the lives of our colleagues and our students meet in all their messy, intimate complexity.  Yes, I learned a lot in my first year teaching, probably more than my students. How to write lesson plans, how to fill out a report card, how to organize a field trip, how to schedule parent-teacher conferences, how to work the copy machine.  But the most important lessons were the ones that taught me how to be a better human being.  And those lessons are timeless. 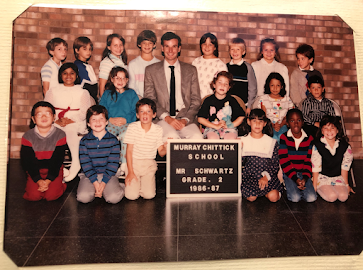 Posted by Joe Schwartz at 5:48 PM No comments: