Sometimes very subtle shifts in what we do as teachers lead to profound changes in our classrooms.  I was reminded of this again earlier this week.
Monday morning I sat down with Rich to talk about the next (grade 5) unit, which would involve lots of adding and subtracting of fractions with unlike denominators.  We knew that being able to find common denominators was going to be a key skill.  I shared something I had used with students in the past: a multiplication/division facts table in a plastic sheet protector with an expo marker and an eraser.  He had some tables already laminated. 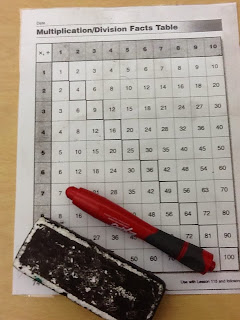 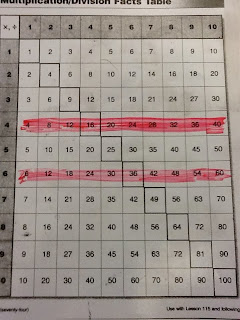 ...uncovering the ones they have in common... 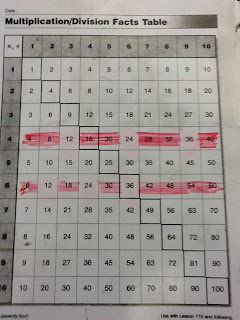 ... and identifying the lowest.  Simple. 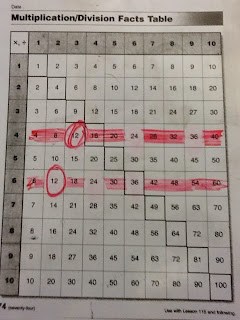 In the past we would have handed out the tables and told the kids what to do.  We would have modeled the procedure and practiced examples together.  But we decided to do something different.  What would happen, we wondered, if we just gave them the tables and asked them to figure out how to use them?  We decided to find out.

Here's a copy of their task: 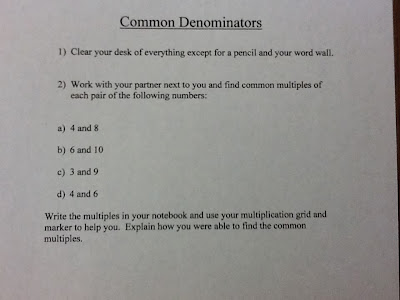 As soon as we saw what was happening to those tables, we knew something important was going on.  Some groups started checking off all the multiples.  They got confused about which ones went together. 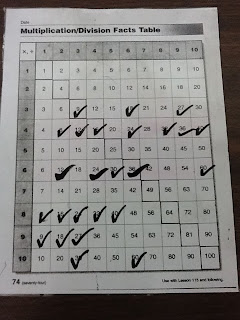 One student, I'll call him Gabe, came up with something that looked like this: 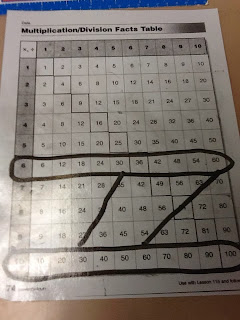 We looked at Gabe's chart under the document camera and argued its merits.  Students agreed that Gabe had a good idea; it was easy to understand and use. 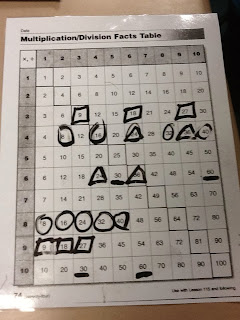 This is what Alan's table looked like.  He created a system that involved marking multiples with a "shape code".  We looked at that under the document camera.  The kids had fun trying to figure out what Alan had in mind.  Alan had a big smile on his face as he stood by the smart board while his classmates analyzed what he had done.  They agreed that Alan's system was pretty cool!


After a quick demonstration of how to use the common multiples to make fractions with common denominators, the class went off to work with their tables.
As we wrapped up the lesson, we had the kids reflect on the usefulness of the tables.  Maya remarked, "I used Gabe's special technique to find common denominators."
To understand what this means, you would need to know that both Gabe and Alan are two of our basic skills students, and Maya is one of the brightest students in class.  Had we just explained to them how to use the tables, they would have had more time to practice the skill, but no time to engage in a problem solving activity that required them to come up with a logical way to organize their thinking.  Sam's and Alan's approaches to the problem would not have seen the light of day.
As the class filed out for lunch, Rich whispered, "Did you see how Gabe got all puffed up when Maya told the class about how she used his special technique?"
Not every lesson can be a home run.  But a whole bunch of little singles can add up to a big inning.  Ask Gabe and Alan.