One game that's gotten a lot of play this year is Salute!

A few weeks ago I found myself sitting on a carpet in the back of a third grade classroom, in a school not my own, with a group of four students getting ready to play.

Me: Salute! needs 3 people to play.  Two to hold the cards with the factors up against their foreheads and one to deal the cards, call out the product, and judge who got the missing factor first.   How do you play with four?

Student: The teacher said that two of us act as the dealer, product caller, and judge.

As I watched them play, something occurred to me.  What if 3 kids held factors up against their foreheads?  Would the student acting as the dealer be able to multiply all three?  Would any of the kids be able to find the factor facing out from their forehead?  I didn't know these kids, or their skill levels, other than a word from their teacher that they were a "middle group."   How would they react? The kids in my school no longer flinch when I volunteer them as subjects in my little experiments, but these kids are not used to having some crazy math guy come in and disrupt their lives.  Should I wait until I got back to my school?

Me: You guys want to try something different?

I explained my idea.  One student agreed to be the dealer for our trial run.  Here were the three cards she saw facing out from her classmates' foreheads:


After the cards were dealt, it dawned on me that I was going to have to multiply the three numbers together!!   After all, assuming she could do the multiplication, how would I know whether or not she was correct?   I looked over at her, and saw her eyes get a little wider.  We were both going to have to do a little thinking.
I took a breath and focused back on the cards.  First I multiplied 7 x 7 and got 49.  That's really close to 50, I thought, and 50 x 4 was 200.  Well 49 + 49 + 49 + 49 had to be 4 less than 200.  200 - 4 was 196.  So the product was 196.  I checked and re-checked the math in my mind, and waited.
I don't know how much time went by, maybe a minute more, maybe two or three.  Then, in a small voice, full of question and uncertainty, she spoke.
"196?"
"Yes!"  I said, relieved that we had agreed.  I turned to the three students, still sitting there with the cards held up against their foreheads.  It was their turn to sweat.  "OK!  The product is 196.  Can any of you figure out what number you've got?"
Something akin to panic set in on two of the faces.  The other belonged to a boy whose eyes began to roll up to the top of his head, ever-so-slightly, as if he was looking into his brain.  He was holding one of the 7s.  I felt myself willing him to get it.  Finally, again after several minutes:

Me: How did you know?

Me (to myself): Did we just have a number talk?

It was time for the students to switch centers.  As the next group moved in (another group of 4 that the teacher had informed me was the "low" group),  I realized that I had been fortunate.  What if the factors had been different?  Say a 7, 8, and a 6?  That would have increased the difficulty, both for me and the kids!  Just to be on the safe side, I quickly rigged a deck with the numbers 1-5, a few 6s, and some 10s.


I haven't had a chance to explore the many possibilities that this variation of traditional Salute! has to offer.  If you've got some time left in your school year, give it a try! 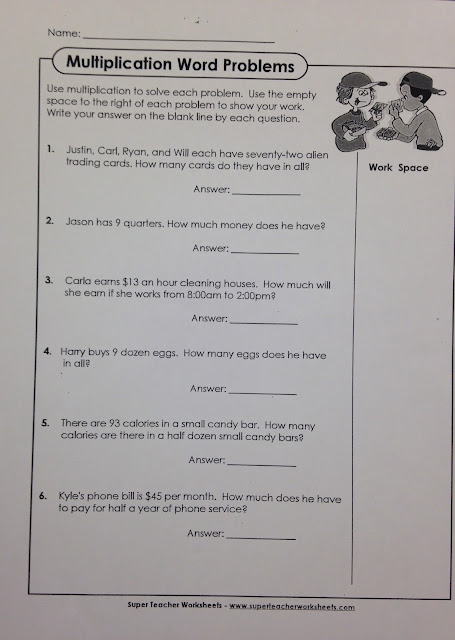 Can we stop telling them how to solve problems?

Recently observed:
The class was in the middle of a series of lessons centered around developing strategies for multiplying 2-digit numbers by 1-digit numbers.  On this particular afternoon, a group of students was working independently on the above worksheet.  One student, after reading the first question, wrote 72 + 72 + 72 + 72 in a column in the work space.  As he began to add up the numbers, an instructional aide working in the room stopped him and said, "You have to use multiplication to solve this problem.  You're learning about multiplication, and it says in the directions to use multiplication."
Obediently, but with an under-his-breath groan, the student erased all his work.
I was not in a position to stop this from happening.
Things like this happen all the time.
If we're going to use worksheets like this, can we at least cut the top off first?