Love him or hate him, most agree that Carmelo Anthony is the MVP of the Knicks.  Unless, that is, you're a fifth grader in Rich Whalen's class, in which case...

Yes it's true, turns out Andrea Bargnani is the Knicks MVP!  How can this be?
The kids were getting a bit burned out on all the fraction work, and we still had a ways to go in the unit, so we decided to take a time out and circle back to something we explored in September: factors, primes, composites, and the game "Factor Captor".   At the time, Rich and I had played around with a project centered around football rosters.

It wasn't so great.  There were too many numbers, too many questions, and not everyone was secure with the requisite skills.  We got a little mileage out of it (mostly with the high achievers), but did not follow up.
I liked the idea of using basketball rosters.  Fewer numbers, and easier to work with.  My idea was to play off the rules for "Factor Captor" and have the kids take each player's jersey number, find its factors, identify the number as prime or composite, and then add the factors together to come up with a "score" for that player.  The player with the highest score would be the team MVP.  Then all the scores would be added, giving the team one final, total team score.  Then we'd set up a tournament where you would match up against another team, and the team with the highest total score would win and advance.

Shannon had a great idea about how to change the game: instead of simply matching total score vs. total score, why not match player vs. player?  Team 1 would identify a player, Team 2 would match him with a player from their roster, and the team with the highest scoring player would receive the point differential.  Any missing factors (on either side) could be "stolen" and added to the team's aggregate score.  Then Team 2 would select a player, and so on.  The differentials would be added, and the team with the highest total would be the winner.  This added an element of strategy that was missing in my original conception, and had the added benefit of echoing the rules of "Factor Captor".

Of course I had to get into the action.  I was partnering with one of my students (we were the Knicks of course!)  I knew beforehand that the Heat had a higher aggregate total than the Knicks, but was hopeful that by implementing some type of match-up strategy we might pull it out, and I openly discussed this during the game.   One of the boys running the Heat roster said that he didn't think it mattered, in any order the Knicks would lose.  I asked him to explain why, but he wasn't able to articulate a reason.
This got me thinking, and I pulled Rich aside.  We began to talk it through.  Did order matter?  If it didn't, then the outcome of every game was predetermined, and playing served no purpose other than having kids practice finding the difference between two numbers and doing some column addition.   Quickly Rich and I tried different combinations of only three players per side, and here's what we found:  The scores of each game would vary depending on the order the players were matched up, but the difference in the scores would always remain the same.
I called my supervisor and explained the problem.  That afternoon he showed up at my door with this:

I had to try this for myself.  I could understand why order didn't matter, but I was fascinated by the fact that the score would change.  I had to play it out on my whiteboard.


This was really cool.  In each instance Team A won by 15 points...but the score of each game was different.  So we were faced with a decision about how to proceed with the project: we wanted the kids to discover this for themselves, but having them play each other multiple times with a 15 man roster would take too long, and the inevitable computation errors would confound the discovery process.  After some thought, we decided to have everybody play the same 5 on 5 game with Eastern Conference vs. Western Conference All-Stars.

We set them off to work.  They were given the option to work alone or to choose someone to partner with.


Finally we had to call it quits.  Some were now convinced that the West would always win by 3 points, but there were many who just wanted to keep trying.  And that's where we left it.  Unresolved.
Here's what I learned:

Here's why I think it was successful:

Here's what I'd do differently next time:

And we're not done with this project.  So stay tuned for some more NBA action!

Adding and Subtracting Decimals (with varying degrees of success)

Working our through the unit on decimals in fourth grade, Jeff came up with a good idea to help think through place value while practicing multi-digit addition and subtraction skills.

And here is what we learned on Thursday:


Here's what we learned on Friday:

This became the lunch discussion topic.  Why, over more than two years after first being introduced to subtracting multi-digit numbers with regrouping, were so many still having so much difficulty?  Was it underdeveloped number sense?  Inability to decompose numbers?  Were there still kids not developmentally ready? Or maybe something else is happening.  Are kids overgeneralizing the commutative property?  Think about how they are taught their "basic facts". I know in our curriculum there is a heavy reliance on "turn-around" facts" (2+3 = 5, 3+2 = 5). Would it then make sense to a kid that 3-2 = 1 and 2-3=1?
Of course when we get to subtraction in vertical columns, teachers often tell the kids, "When the number on the top is smaller than the number on the bottom we have to regroup."  Why? "Because we can't take a bigger number away from a smaller number."  Which is not true, as Jeff points out, and may make life more difficult for them when they encounter negative numbers.
Regarding this issue, I have never been able to shake something I saw many, many years ago.  Our district was between math curricula.  We had dropped something like Houghton-Mifflin or Harcourt-Brace (can't remember which) and had not yet adopted Everyday Math.  I was among a group of teachers who piloted a program called CSMP.  I was a beginning teacher and did not know much about math education, but there was something about it that was intriguing, and I saved some of the lessons and continued to use them.  One lesson described a way to subtract multi-digit numbers that I had never seen:

Has anyone tried anything like this?  Of course for this method to work you'd need to  recognize that this is a problem in need of regrouping in the first place, otherwise you'd still get an answer of 456.  Any ideas would be helpful, because just today, this happened:

Because decimals can be confusing when you're nine years old, and because we like number lines and estimation180-like activities, and because we live in a world where 4.NF.C.6 exists, Jeff, Shannon, Theresa, and I decided to try something a little different with the fourth graders last week. 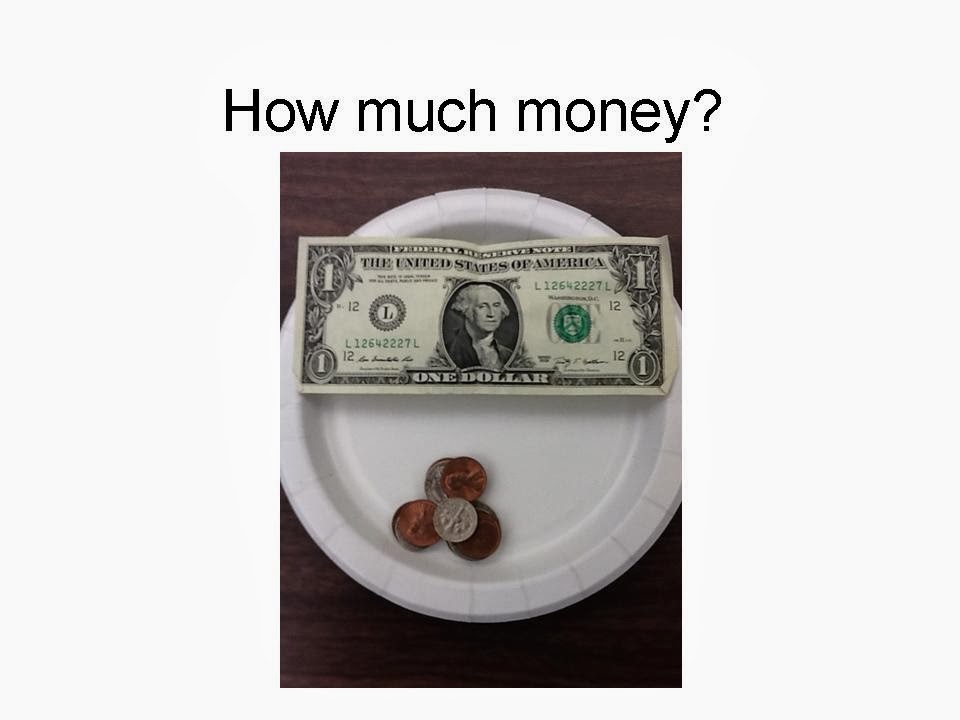 Day 1
We decided that, instead of having the kids make their own number lines, we would give them one that was pre-made: 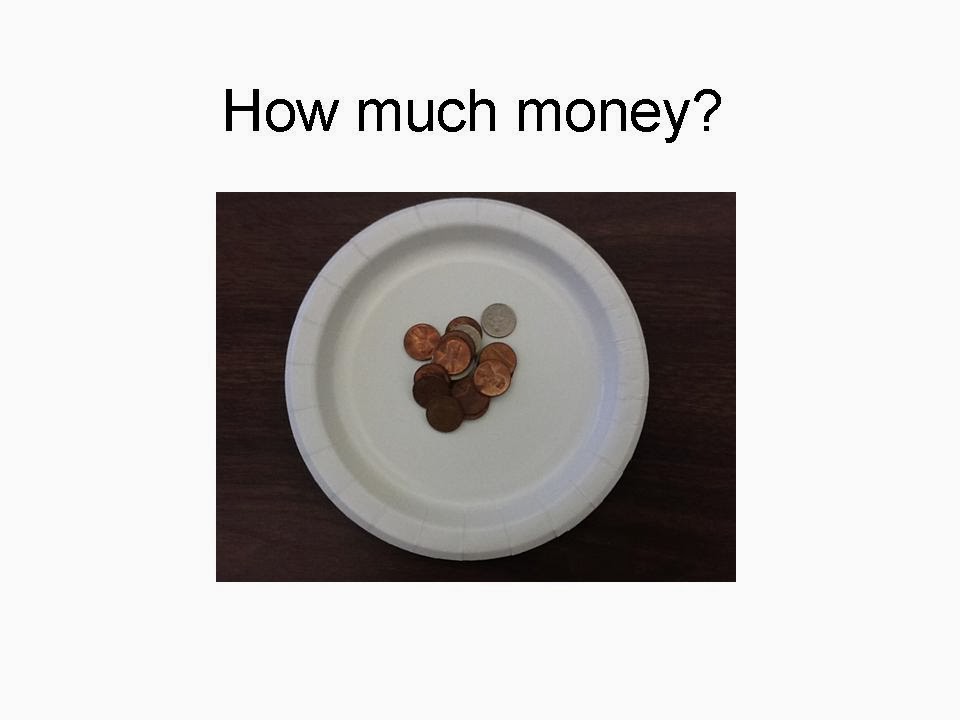 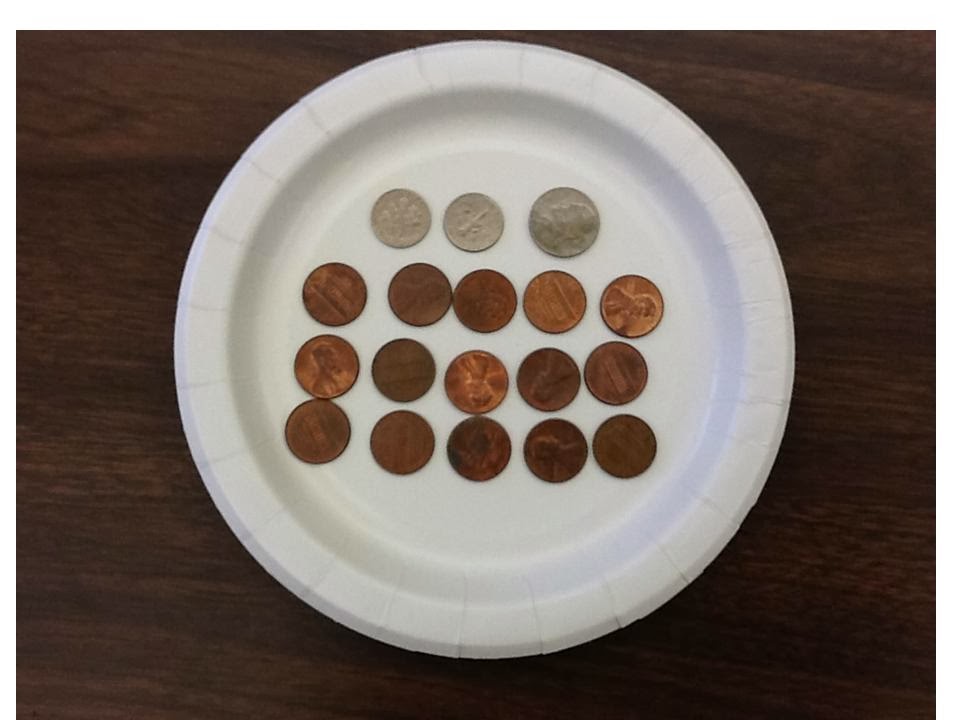 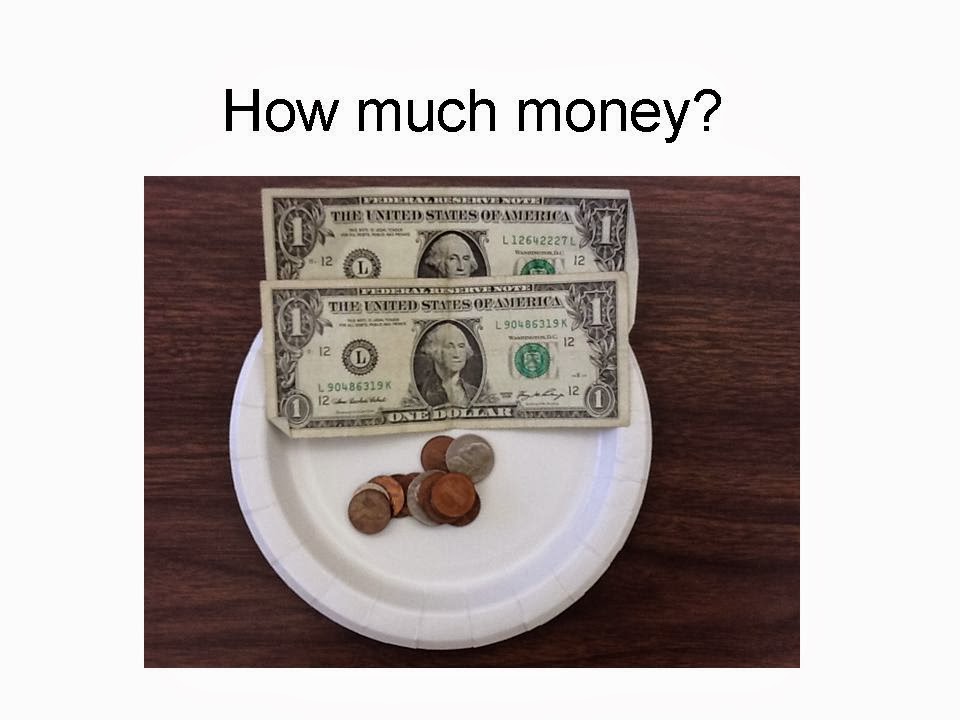 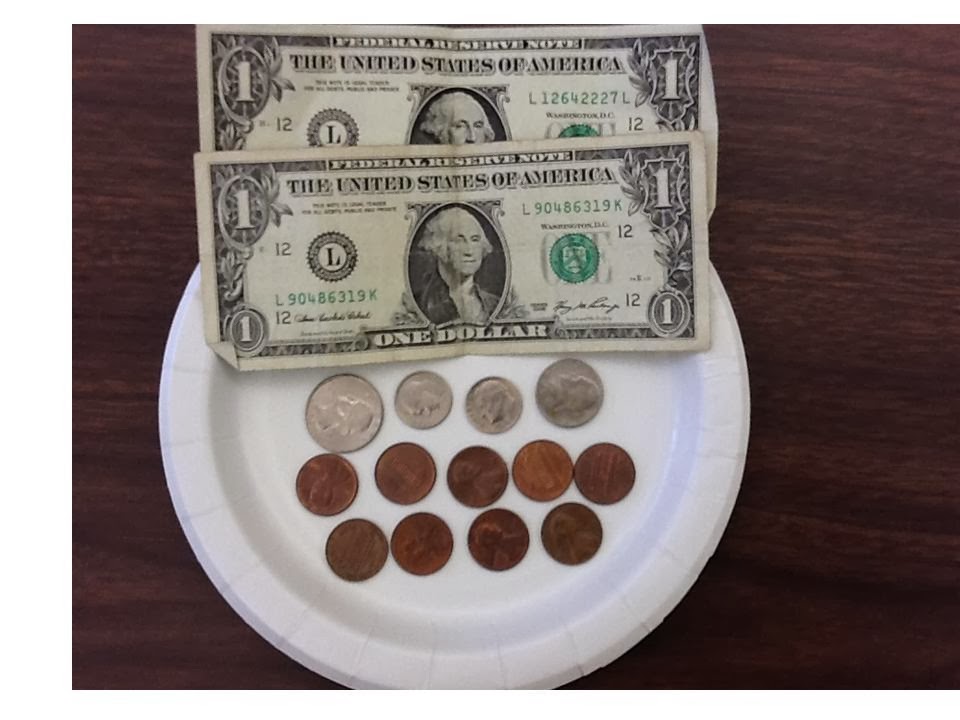 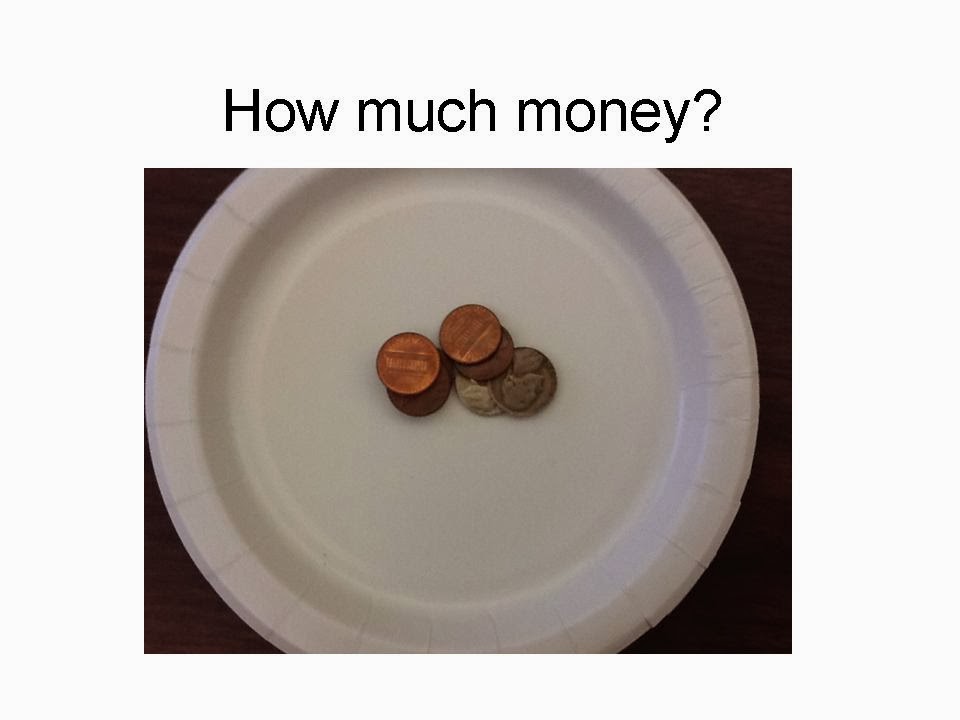 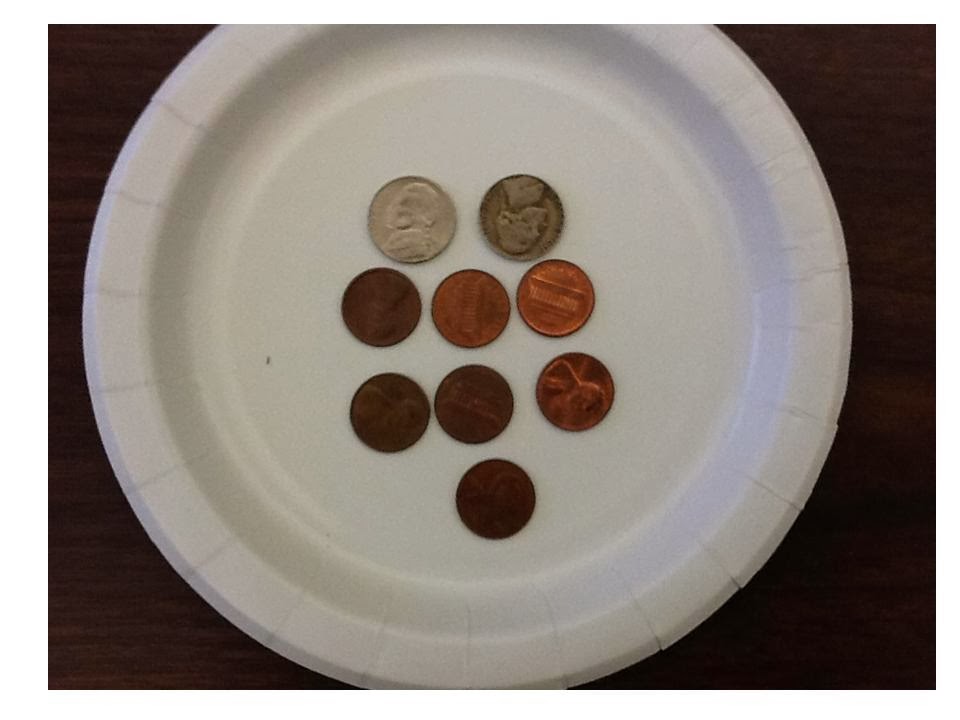 Here's a sample number line after we were finished:

This is all very interesting to us, because as we explore more of these activities we get deeper into number sense than we ever have before and, developmentally, the kids are all over the place.

Yesterday we went back to our first activity:

Except this time we wanted them to estimate his height in meters.


When we made the decision to replace our traditional "math message" with a daily estimation-180 activity, we never imagined it would lead to places like this.  It seems as if we've opened up something of a Pandora's Box (where good things fly out?)  But it's too late now to close it, and who knows what else is in there?

Posted by Joe Schwartz at 5:36 AM No comments:

You could study exponential growth by tracking the pageviews my blog has received since this happened. I suppose it's like what happens when Oprah picks your book for the next book club.  Dan was the reason I started to blog in the first place, and from there it was on to Fawn, Michael, Andrew, Christopher, and many others.  Thank you all for your inspiration.
Dan is right about elementary school teachers.  I taught everything: reading, math, social studies, science, health, the whole megillah for over 20 years, in both second and third grade.  Now it's just math; helping struggling students, and helping teachers by supporting instruction and doing the kinds of things they don't always have the time and energy to do, like blog and find cool things to do in their classrooms on other people's blogs.  They work really hard, and I am proud to call them colleagues and friends.  Many have allowed me to turn their math classrooms into experimental laboratories, and I am grateful.  Sometimes things blow up, but when they don't it's a reminder of why we do what we do.
Thank you all.  And in the words of #10...keep postin' and toastin'!

Turns out I have a really good math book at home.

As we were finishing up our unit on multiplying and dividing fractions and mixed numbers, Rich and I decided it might be fun to do something other than grinding through more journal pages and worksheets.  I know there are loads of activities out there that use cooking and recipes to help build fraction concepts, but our little project was, at least for us, breaking new ground.  The idea was to copy some recipes (ones with nice combinations of whole numbers, fractions, and mixed numbers).  After choosing one they like, the kids would roll a die which would indicate whether they were to double, triple, quadruple, half, third, or quarter the recipe's ingredients.  They would show their calculations and results.


We got two days of solid work from the kids.  They were really engaged and excited.  There was a lot of opportunity for us to work with kids still struggling with the computation, and to place the work in a meaningful context.  And there were some side benefits:


At one point on the second day Rich and I were just standing in a corner of the room watching it all happen. "This is the way it should be," we decided.  "They're doing all the work."   We agreed it was something we need to try to recapture on a more regular basis.
And one boy insisted I copy the Butterscotch Squares and Italian Fried Chicken recipes for him to take home.

Posted by Joe Schwartz at 11:00 AM No comments: