Out of the Box

One of the first things I did when I took over the position of math specialist at my school was take inventory of what had been left in my new room.  There was quite a collection gathering dust in the closets, cabinets and drawers, most of it dating back many years: office supplies, manipulatives, old textbooks and workbooks, files, games, flashcards, and measurement tools.  Some of it I tossed.  Some of it I distributed to teachers and classrooms.  The rest I kept.


One day, looking for something to fill a few extra minutes with one of my basic skills students, I grabbed the game, opened the box, and gave it a try.

Simple.  I grew to love the game, and it soon became a stand-by.  It has many benefits:

The game has one insidious aspect, the dreaded "Endless Loop":

Last week, I was playing the game with one of my grade 2 basic skills students.  She had traveled around the endless loop a few times, and her frog sat one square before the exit.  She picked up the dice, but before she rolled I stopped her, and asked a question it had never occurred to me to ask before:

Me: What will you have to roll to land exactly on the exit?
Her: A one.
Me: Yes, a one.  How can that happen?  (I knew that a roll of 11 would also work, but that's not where I wanted to go.)
Her: (silence)
Me: Show me what the roll would have to look like for you to get a one.


Her (putting up two fingers and taking one down): 2 minus 1 equals one!
Me (realizing I might be on to something): What else could you roll?

The period was coming to a close, and we finished the game.  I put the whiteboard aside, with the intention of taking it out again at our next meeting and using it to help her dig through what she had discovered about differences equal to one.   And I understood that there were more benefits embedded in the seemingly simple game than I had realized.  I had been focused on content standards, and had overlooked the opportunities to engage students in practice standards; in this case, a nice combination of SMPs 1 and 7.
I've written about games before; how they can be used and repurposed.  I'm glad my predecessor left Sum Swamp behind.  More importantly, I'm glad I held on to it.  I never could have imagined what would come out of that box.

Noticing and Wondering: A Sampler

It's hard for me to believe that I've spent most of my teaching career in complete ignorance of noticing and wondering.  This simple, elegant prompt has become an integral part of my practice, and its use is spreading throughout the school.  Here are some examples from the past few months:

It was clear that some of the responses were inspired by our continuing use of the pie-eating contest:

But many took a different direction:

Grade 2:
The second grade teachers have done a wonderful job incorporating noticing and wondering into their math message routine. 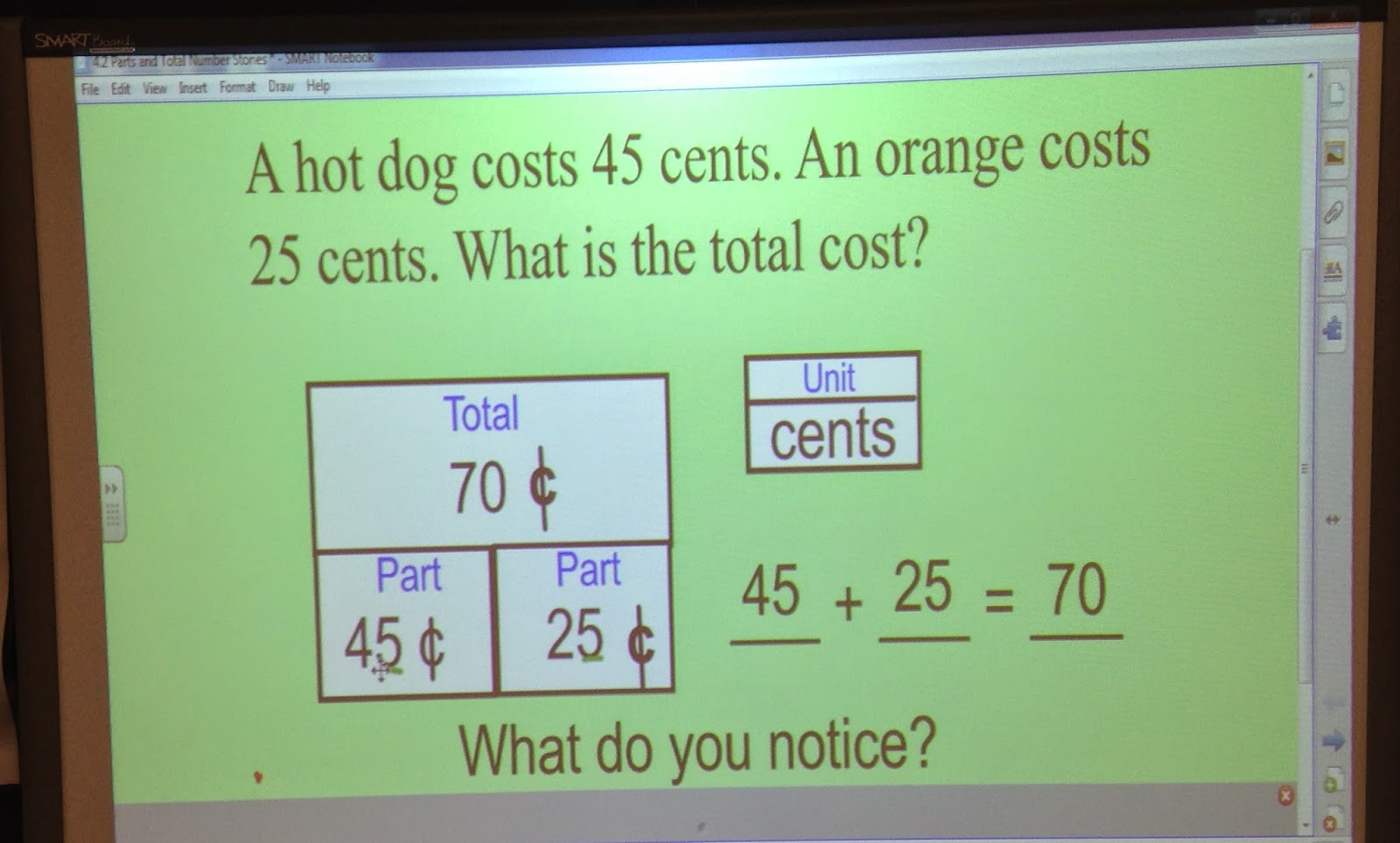 Instead of asking the kids to fill in the diagram and solve the problem, Maggie provided the answers and let them have at it.  Here's what came up:

Theresa and I have been spending time with the first grade teachers and students talking about the importance of subitizing.  It made me happy to walk into Jen's room one morning and see what she had chosen for a warm-up activity:

Last week I found myself staring down a guided group and a pile of  Magic Squares that I had found to help the kids practice adding fractions and mixed numbers.  I will admit that I had not put much thought into how I was going to present the task.

Asking the kids to notice and wonder allowed them all to enter the task at the ground floor.  They noticed the boxes, some empty and some filled; they noticed the two mixed numbers and the one whole number; they noticed the tic-tac-toe-like configuration.  They wondered what might be magical about the 40 1/2; they wondered whether some mathematical operations might be involved.  After only a few minutes of discussion, they were ready to go,


Noticing and wondering has many benefits:


Noticing and wondering is all the rage at my school.  How are you using it at your school?

What do you do when a student in class raises his or her hand...and then proceeds to give a wrong answer?  Do you:

These are the two most frequent responses I observe (and have used myself).   As teachers we know that our students will give wrong answers.  And as teachers we know that there is a lot more riding on our response than the misunderstanding of a concept or procedure.  There are emotional consequences as well.  If we're not careful, the way in which we handle wrong answers can effect a child's perception of himself or herself as a learner, cause embarrassment, and lead to an unwillingness to contribute to and participate in class activities.  So what can we do?
As with many things, we can look for answers to the NBA.  Specifically Houston Rockets extraordinary two- guard, James Harden.

In a recent article in Grantland, Kirk Goldsberry deconstructs Harden's scoring genius.  He finds there's more to Harden's offensive game than his shooting prowess and uncanny ability to draw fouls and get to the line.   He explains:

But even when his attempts fail, they have a chance of succeeding. The entropy from his slashing drives, which scramble defenses, enables his teammates to slip into great rebounding positions. Not all missed shots are created equal, and sometimes they function a lot like inadvertent passes or shot-clock reset buttons.

In Goldsberry's example (above), Harden drives down the lane and misses the lay-up.  A teammate, however, is in perfect position for a put-back slam.  Functional miss.
Is it possible to put this notion into practice in the classroom?  The day after reading the Grantland piece, I was helping a guided group of struggling fifth graders work through fraction addition at Rich's back table.


It was at this point that a student, I'll call him Jeremy, raised his hand.  Jeremy is new to our school.  His math skills seem shaky, which is why Rich decided to have him work with me in the guided group.  I was glad he felt comfortable making a contribution, and was curious to know what he had to say.
"That's a mixed number!" he exclaimed.
"Where?" I asked, hoping he was referring to the sum of the two fractions.  Was it possible he was two steps ahead of us?
"Three-sixths," he said, pointing to the fraction on his whiteboard.  "Three-sixths.  That's a mixed number."
I could sense the unease of the rest of the group.  We had spent several weeks talking about improper fractions and mixed numbers, and I was sure they knew he was wrong.  I decided to press him a little.
"What makes it a mixed number?" I asked
"The numerator and the denominator got bigger," he told me.
The moment of truth.  The time to make one of the hundreds of decisions, both big and small, a teacher has to make each day, every day.  What size decision was this one?  What would you do?

I decided to highlight what was correct, ignore the mistake, and move on.  Perhaps I could turn it into a functional miss.
"What you said about the numerator and denominator getting larger is correct, Jeremy," I responded.  "Let's work on finishing the problem."

"There's Jeremy's mixed number!" I said, addressing everyone at the table but looking right at him.  "1 1/6.  A whole number and a fraction.  That's what makes a mixed number."
Did I make the right decision?  I'm sure there are others I could have made, and maybe some would have been better.  I know I have to spend some time with Jeremy, who is likely in need of some intervention.  But in that moment, Jeremy had the correct answer.  Because inside of every wrong answer, there's a correct answer just waiting to get out.  If we can find the right question, we turn it into a functional miss.
As fate would have it, that night the Rockets destroyed my sorry Knicks.  James Harden went off for 25 points and 9 dimes in just 30 minutes.  As much as it hurt, I had to smile.

A Game, a Decimal Point, and Some Formative Assessment

Looking for a fun way to have the fifth graders practice their multiplication and addition facts, I mashed up two games, one from Math 4 Love and the other from Malke Rosenfeld.  I did a demo round, then wrote the rules on a whiteboard:

As I walked into class one afternoon, a little later than usual, I sensed something wasn't right.  The room, normally buzzing with activity, was quiet, save for the sound of suppressed giggles.
"Something going on I need to know about?" I asked.
Rich looked at me with a smile.
"Check the whiteboard."


;
"Oh no!" I cried out, in my best fake-horrified voice.  "How in the world am I going to come up with that kind of money?  I've got bills to pay!  A family to support!"  I turned to Rich, pleading,
"Maybe Mr. Whalen can help me out?!"
They couldn't hold it in any longer.  The class exploded with laughter.  It took a few minutes for them to get back on task, but I didn't mind in the least.
"Well," I said, turning to Rich, "There's a little bit of formative assessment for you.  Someone in here knows the significance of a decimal point."
And the winner was...