Something I've been carrying around in a folder for years finally got a trial run this past winter in one of the grade 2 classrooms I visit, and it was a big hit.  Lifted from the Georgia Frameworks (you can find a detailed lesson plan, directions, and game sheets in Grade 2, Unit 1, pgs. 80-89), it's called Capture the Caterpillar, and if I can make any sort of contribution during this current crisis, it's an activity I'd highly recommend.  It will work just as well at home as it does in the classroom.
Capture the Caterpillar combines place value, comparing numbers, addition and subtraction, number sense, and strategy as you attempt to get as close to a target number as possible.  All you need are:

Here's how it works: 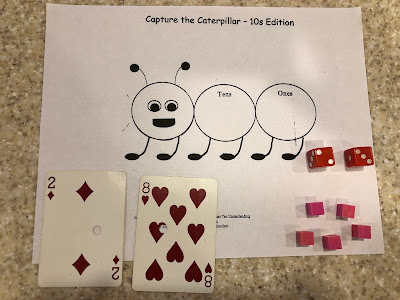 In the above example, 32 is the closest number to 28 we can make given the 5 counters.  We would score 4 points because the difference between 32 and 28 is 4.  Play as many rounds as you like (in the game it's 5) and try to get the lowest score possible.
Here are two second graders playing this game.  Their target number is 22 and they have 9 counters.  Pay attention to how they collaborate; how they count, how they determine the differences between their numbers, how they talk through the rules, how they plot strategy: 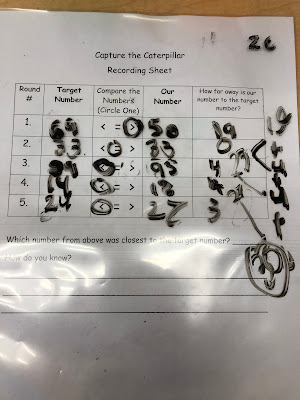 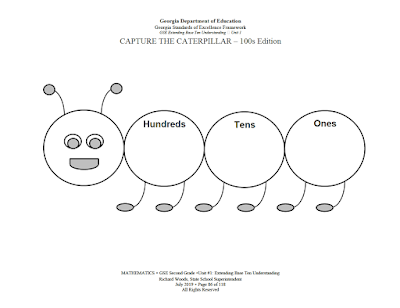 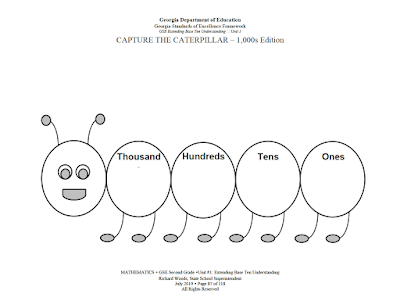 My hope is that this activity can be used by parents working with their children at home and teachers working virtually with their students.  I can only imagine what it must be like for all those trying their best to continue to provide meaningful educational experiences for their kids right now.  Know that, when all is said and done, you will be counted among the many heroes who held our society together during this most difficult and challenging time.

Ten years ago this month, on March 6, 2010, a tall man in a maroon sweater vest gave a Ted Talk.  It clocked in at 11 minutes and 24 seconds.   Here's how he described what he did for a living:
"I sell a product to a market that doesn't want it but is forced by law to buy it.  I mean, it's just a losing proposition."
He called the talk "Math Class Needs a Makeover."  His name was Dan Meyer.  He was a high school math teacher, and he was tired of losing. 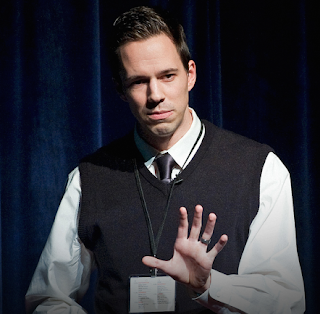 How long does it take to change your life?  I remember exactly where I was the first time I saw it.  Sitting at my computer in Room 10A, in that elementary school somewhere off the New Jersey Turnpike, I was an unlikely math specialist with a very conflicted relationship to the subject, searching for something, anything, that might make a difference in the lives of the basic skills kids I was supposed to be helping.  What I saw took my breath away.  Here was an actual math teacher giving voice to and validating everything I felt was wrong about math instruction while showing a way forward.  It was a manifesto.  It was a challenge.  And, for me, it was nothing short of revelatory.  From there it was a few mouse clicks to his blog, which I devoured, anxiously awaiting each new post, and his "Blogulty Lounge", where I discovered the work of Andrew Stadel, Fawn Nguyen, and Michael Pershan, among others.  (I'll admit here for the first time that it was years before I got the pun: of course an online Faculty Lounge was a Blogulty Lounge.)  I began to experiment with ideas I found in this new online universe in the K-5 classrooms in my school and, in emulation, started my own blog as a way to record and reflect on that work.  How long does it take to change your life?  11 minutes and 24 seconds.

Ten years, 33 languages, and over 2,800,000 views later, "Math Class Needs A Makeover" is as powerful and important today as it was then.  Will we ever truly be able to measure its influence?  One of the very first comments on the talk came from a 17 year old named Timo Bronseth.  He wrote:
"By the time Meyer's idea has overthrown our school system, maybe I'll be teaching it!"
Timo's now 27.  I'd like to imagine he's out there somewhere, doing a 3-act task with his class, trying to overthrow the system. 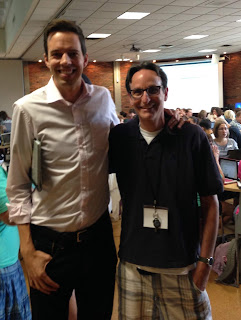