If I appear to be asking too many questions and not providing any answers, I am merely trying to convey the flavor of MSC ( the Manned Spacecraft Center) in 1964, when we had a mandate to fly to the moon but few hard facts with which to work.  It was primarily a question-asking operation at this stage, defining those things which needed answers...


For my money, the best part of a 3-Act task is Act 2.  After the focus question has been established, but before any math work has been done, Act 2 is where students need to ask the teacher for the information they'll need in order to solve the problem.  It's crucial to the entire enterprise: if the right questions aren't asked the key information will not be provided and the problem will remain unsolved.  For students used to being given all the information they need embedded within the problem (Johnny has 3 apples.  Billy has 4 apples.  How many apples do they have in all?) understanding what information might be useful, and then asking for it, isn't always easy.  But the skill is all-important.
*


Michael Collins is best known as the astronaut who didn't land on the moon (he orbited while Armstrong and Aldrin made the first crewed landing on its surface).  Caught up in the excitement this past summer surrounding the 50th anniversary of the moon landing, I read his book Carrying the Fire, in which he describes his experiences as an Air Force pilot, his astronaut training, and his flights aboard Gemini 10 and Apollo 11.  It's compulsively readable and highly recommended!

I didn't realize just what an incredible accomplishment it was to put a man on the moon until I read Collins's book.  The lives sacrificed (of the fourteen candidates chosen along with Collins in the third astronaut cohort, four would die in training accidents, as well as Grissom, White, and Chaffee in the Apollo 1 cabin fire), the money, resources, time and expertise dedicated to the mission; in 2019 it's hard to imagine our country uniting behind a project of that magnitude.

*
Like a 3-Act task, the project started with an Act 1 focus question: How do we put a man on the moon before the end of the (1960s) decade?  Then came the complicated part: What do we need to know in order to accomplish the goal?  Well, start asking questions.  And remember, one unasked question could put the entire enterprise in jeopardy, so, no pressure.

Collins's book has questions on nearly every page.  There are way too many to list them all, but here's a very small sample:
*

Collins:
In 1964 in Houston a lot of answers had to be provided before any rational person could assess the chance of success.
Those questions were answered in test chambers, in flying simulators, in labs and factories and classrooms, on computers and chalkboards and notebooks, and in the data collected from each successive space flight, starting with the first Project Mercury flight on May 5, 1961 through Project Gemini, and culminating with the Apollo 11 flight, July 16-24, 1969.  Before the end of the decade.

Only a select few had the ability and the talent to be able to answer questions like the ones that needed answering on our way to the moon.  Brilliant mathematicians, engineers, physicists, geologists, and doctors crunched the numbers and solved the equations, collected and interpreted the data.  Once given the necessary information, not every student is going to be able to come up with a solution in Act 3 of a 3-Act task.  Am I interested in that?  Yes.  But I'm more interested in Act 2: What questions did you ask?  What information do you think you need to know?  And remember, one unasked question could put the entire enterprise in jeopardy.

If I could use only one word to describe the earth as seen from the moon, I would ignore both its size and its color and search for a more elemental quality, that of fragility.  The earth appears "fragile" above all else.  I don't know why, but it does.  As we walk its surface, it seems solid and substantial enough, almost infinite as it extends flatly in all directions.  But from space there is no hint of ruggedness to it; smooth as a billiard ball, it seems delicately poised in its circular journey around the sun, and above all it seems fragile.  Once this concept of apparent earthly fragility is introduced, one questions whether it is real or imagined, and that leads inexorably to an examination of its surface.  There we find things are very fragile indeed.  Is the sea water clean enough to pour over your head, or is there a glaze of oil on its surface?  Is the sky blue and the cloud white, or are both obscured by yellow-brown air-borne filth?  Is the riverbank a delight or an obscenity?  The difference between a blue-and-white planet and a black-and-brown one is delicate indeed.
....The beauty of the planet from 100,000 miles should be a goal for all of us, to help in our struggle to make it as it appears to be.

The Earth Appears Fragile Above All Else


Inspired by the 50th anniversary of the moon landing, I read Carrying the Fire, Michael Collins's compelling, funny, honest account of his astronaut training and experiences aboard both the Gemini 10 and historic Apollo 11 space flights.  He had no ghostwriter; every word is his own.  Here are some excerpts.  I put them in verse (and added titles) because they just seemed like poetry to me.
Hope he doesn't mind.

I would ignore both its size and its color
and search for a more elemental quality, that of
fragility.
The earth appears
fragile
above all else.
I don't know why but it does.
As we walk its surface, it seems solid and substantial enough,
almost infinite
as it extends flatly in all directions.
But from space
there is no hint of raggedness to it;
smooth as a billiard ball,
it seems delicately poised
in its circular journey around the sun,
and above all
it seems
fragile.

I have been places and done things you simply would not believe,
I feel like saying;
I have dangled from a cord a hundred miles up;
I have seen the earth eclipsed by the moon, and enjoyed it.
I have seen the sun's true light, unfiltered by any planet's atmosphere.
I have seen the ultimate black of infinity in a stillness undisturbed
by any human being.
I have been pierced by cosmic rays on their endless journey from God's place
to the limits of the universe,
perhaps there to circle back on themselves
and on my descendants.
...Although
I have no intention of spending the rest of my life looking backward
I do have this secret,
this precious thing,
that I will always carry with me.


What Any Pilot Knows Is the Most Useless Measurement

any pilot knows
from ready-room fable
or bitter experience that
the length of the runway behind him is the most useless measurement he can take;
it's what's up ahead that matters.
We know we cannot dwell
on those good things that have already happened,
but must keep our minds one step ahead,
especially now, 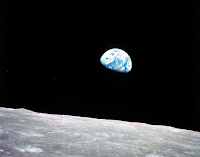