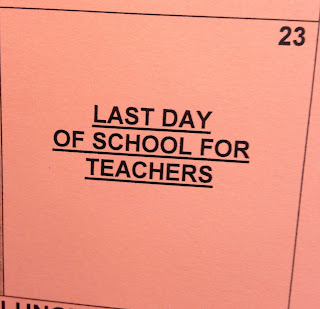 After 31 years, 23 in the classroom and 8 as a math specialist,  I am retiring from public education.  I've spent them all in the same K-5 elementary school, off the New Jersey Turnpike in East Brunswick, NJ.  Over half my life.  It's where I got my first teaching job, where I met my wife, where I lost my wedding ring on the big playground, where my kids came to visit on Halloween and Field Day and Bring Your Child to Work Day, where I shared all the ups and downs of life, both professional and personal, with my colleagues, where I had the privilege of getting to know so many amazing students and their families. What is a school if not an intersection where lives meet?  What is a school if not a place filled with life, in all its very beautiful, very messy, and very human complexity?

While I will continue to be active in the world of math education and write about my experiences here at Exit 10A, I'm going to miss my brick and mortar school and the family I found within its walls.  The noise in the all-purpose room during afternoon dismissal, the bustle in the hallways when periods change, the groans when the announcement that, "Recess today will be indoors" broadcasts over the intercom, the faculty room and copy room teacher chatter.  And the small, intimate moments.  The little kindnesses.  The inside jokes. The whispered gossip.  The hushed, secret corner conversations.  The tears and the laughter.  Those are the things that seem to matter most to me now, and I can already hear their echoes.


For all those facing transition, in this season of transition:


We shape our self
to fit this world
and by the world
are shaped again.
The visible
and the invisible
working together,
in common cause,
to produce
the miraculous.
I am thinking of the way
the intangible air
passed at speed
round a shaped wing
easily
holds our weight.
So may we, in this life
trust
to those elements
we have yet to see
or imagine,
and look for the true
shape of our own self,
by forming it well
to the great
intangibles about us.


What's the value of all the coins in the bowl? 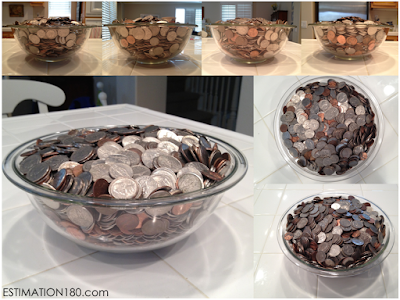 Before you read on, take a moment and come up with an estimate.

Andrew was gracious enough to provide us with the receipt, so Rich and I decided to use the prompt as Act 1 of a 3-act task.  It would provide the kids with multi-digit addition, subtraction, and multiplication practice, and since the bank takes one-tenth of the total amount as a fee for non-members, we would also receive some formative assessment information on how the students thought about decimals and place value. 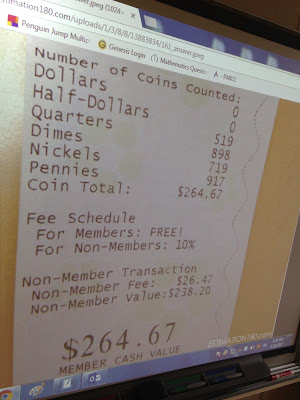 We set the kids up in random groups on whiteboards, and asked them first for estimates. Nicole, the ILA teacher next door, poked her head in.  She asked what was going on, and one of the kids explained that they were estimating how much money was in the bowl. After a few minutes of thought, she started looking around for a scrap of paper.  Finding none, she pulled a tissue from a nearby tissue box, wrote something down, and handed it to me.  I folded it up and put it in my pocket, distracted by all the activity in the room as the kids finalized their estimates and began figuring out how much 1/10 of 519 quarters, 898 dimes, 719 nickels, and 917 pennies was worth: 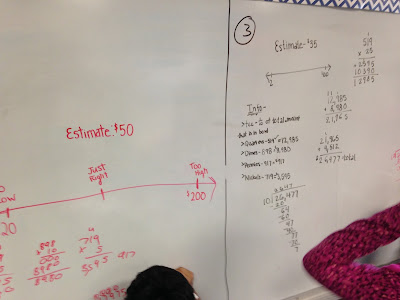 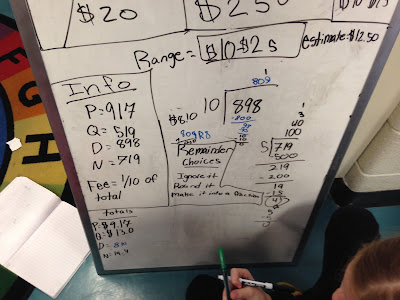 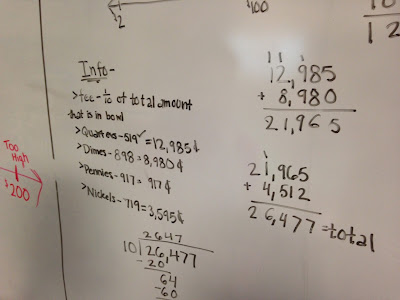 Emptying my pockets at the end of the day, I came across Nicole's estimate: 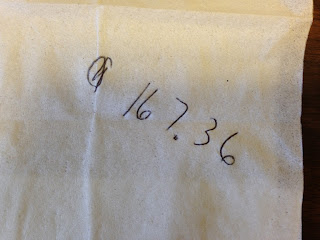 What began to fascinate me, what I wanted to know, wasn't how she came up with the number, but why, having been asked for an estimate, she came up with something so exact!  Not $160, or $170, or $200, but $167.36.  We've been playing around with estimation for years now, and we're continually encouraging the kids to choose friendly, round numbers as estimates, numbers that tell about how many or how much, not necessarily exactly how many or how much.  But we've met with reliable, obstinate resistance.  I looked back at some of the pictures I had taken of student work, looking for a record of their estimates, and while I did see estimates like $300, $40, $50, and $60, I also saw $63.12, $5.57, and $312.10.  Pointy numbers.  Precise numbers.  Numbers that spoke of exact amounts.  Not round numbers.  Not in the general vicinity numbers.  Not numbers that spoke of about how much.  Why?  Is there something hard-wired into our human nature that, when presented with a task like this, makes us want to be exactly right?  Not close enough, but closer than any of our classmates?  Have we been so conditioned by the "Guess How Many Jelly Beans in the Jar"  challenges that we treat every estimation task as a chance to win a prize?
Several days later I asked Nicole about her estimate.
"Why so exact?  Were you trying to guess the exact amount?"
"No,"  she explained,  "I was trying to estimate.  But I guess in my mind they're the same thing."
A few days later, eating lunch in the teacher's lounge...

...four of my non-math teaching colleagues found themselves unwitting participants in an experiment.
"I want everyone to estimate how many gumballs are in the container."
The group was willing to cooperate, and within several seconds one piped up:
"Are we going to count them?  We have to find out who won."
I quickly got up and searched for a piece of paper and a pencil to write down the quote.  She had, on her own, without any suggestion from me, injected an element of competition and challenge into the task.
After a few minutes I asked for their estimates.  I received 3 pointy numbers, 84, 74, and 78, and one round number, 190.  (This teacher had estimated 192 but rounded down to 190.)  Although I wasn't so much interested in their reasoning, they all wanted to explain their thinking, and carefully listened to one another as they each shared their strategy in turn.  I explained my purpose in asking.  I was curious, I explained, why the three hadn't chosen round numbers as estimates.
"The answer is never a round number!" one explained.
That statement gives me a clue as to what may be at work here.  During these kinds of  estimation tasks, I'm asking kids to engage in sense-making, not answer-getting.  Maybe the line between the two is blurred, but it's there.  $167.36 is an answer, not an estimate.
Answer-getting is stubborn.  I know this is true, because my teacher's lounge colleagues were just dying to know, couldn't wait to find out exactly how many gumballs were in the container.  They couldn't let it go:


gumball1 from Joe Schwartz on Vimeo.