So while we were out walking a mile around the school, I noticed the kindergartners picking up trash on the school grounds.  We waved to them, they waved back, we continued our walk, and they continued to collect garbage and put it in the large trash bags their teachers had brought outside. I ran into one of their teachers at the end of the day.
"Great job!  It looks a lot better out there," I told her.
"We collected 37 pounds of trash!" she told me excitedly.


Posted by Joe Schwartz at 4:04 AM No comments:

We tried our first real 3-Act on Monday with Jeff's fourth graders.  Motivated by issues of perimeter and scale (which I blogged about here), and a great post by Matt Jones over at The Math Lab @ Rm 27, we started out with this photo: 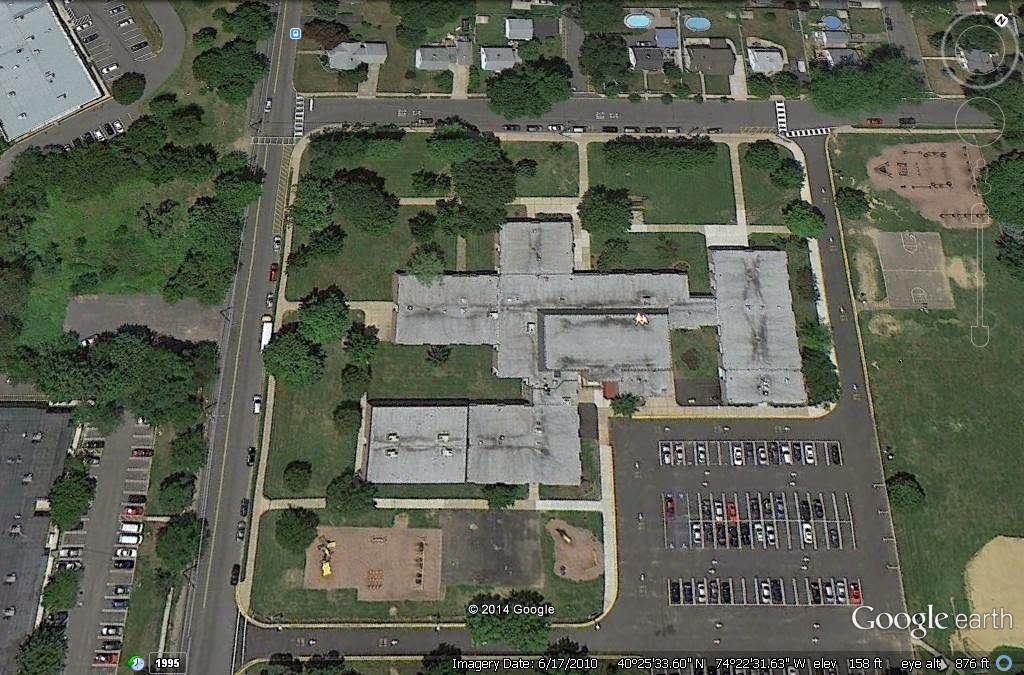 Lots of excitement!  First we asked the kids if they knew what they were looking at.  We were surprised that so many of them knew right away that it was a photo of our school.  In order to orient them, we identified some features together and marked up the photo on the smart board: 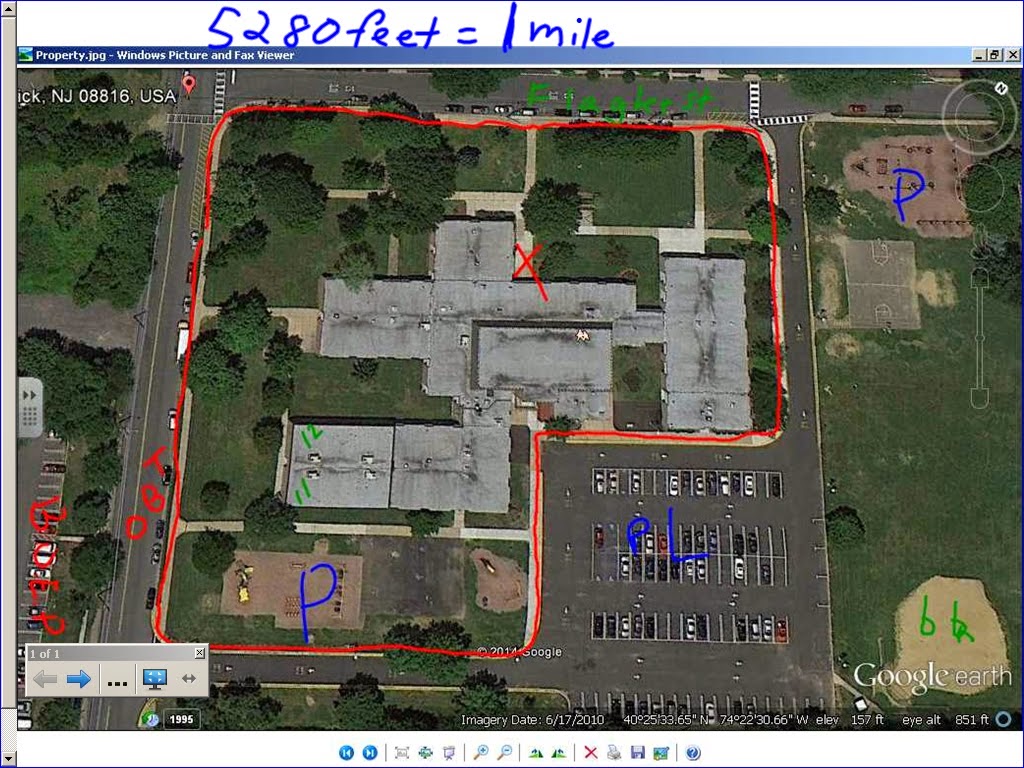 Those scale-related issues had led us to Andrew's estimation180 series on flight distances, which in turn led us to wonder: Do the kids even know what a mile looks like?  Could we relate that to the perimeter of the school grounds?  Our school does a Halloween parade every year so...

How many Halloween parade routes would you need to walk to go a mile?


After discussing individual too lows, too highs, and just rights, the class agreed that the answer would lie somewhere between 1/2 times around and 9 times around.

Then it came time for...

What do you need in order to figure this out?


Some representative responses:
But we did find enough to build on:
We told them that we would give them some of the information they requested:


They liked this, but soon realized that they needed to know how many feet were in a mile.  No one had this answer, though there were some guesses, including 12 and 100.  We had them find the answer in the measurement table in the back of their journal.


The kids realized that they would have to go around again...

The kids needed a bit of help with that...

This is how the class determined that they would need to walk two Halloween parade routes plus most of a third.  We approximated the stopping point along the driveway entrance to the school.
And that would have been the end of that, except...

How long does it take to walk a mile?

We couldn't resist.  Here was a perfect opportunity to build a personal referent for 1 mile, based on something that each child knew well: the route of the Halloween parade.  And since we are now programmed to think of most of our tasks as estimation180-type activities, we had to make number lines for our too lows, too highs, and just rights.


Ultimately the class was satisfied that it would take us somewhere between 1 minute and 2 hours to walk a mile.  And then we all went outside and walked a mile, almost three Halloween parade routes, as Jeff and one of his students kept track of the time.  It took about 20 minutes.
We collected the kids on the grass under a tree.  "What does a mile feel like?" I asked.
Jeff and I discussed what had happened and what we might have accomplished.  Did the kids now have an idea about what a mile was?  Were they clearer about the relationship between feet and miles?  Did the activity strengthen their ideas about perimeter?  Elapsed time?
As the discussion wrapped up, one student gazed over at the large soccer field across the entrance driveway.
"I wonder how long it would be around that big field?"
Funny you should ask...
Posted by Joe Schwartz at 3:51 PM 4 comments:

Sandwiched between a unit on long division and a unit on perimeter and area, our fourth grade curriculum called for a very quick unit on angles.  As it does quite often, inspiration came from Andrew Stadel's estimation180 site; in particular the activities for days 112, 113, and 114.   Relating angles to pieces of pie led me to adapt the Everyday Math game Angle Race into a "pie-eating contest" for our fourth graders.


After looking at their completed pies, I had another idea.  Cut out the slices and classify them as acute, obtuse, right, or straight.


I had some other ideas that I did not get to try out:

I'm sure there are lots of others. Feel free to comment and add your own ideas.

Posted by Joe Schwartz at 8:08 AM No comments:

The Gift That Keeps Giving

Andrew Stadel's estimation180 continues to inspire us.  The seemingly simple idea continues to amaze as it takes us into uncharted waters of number sense, measurement, computation, and now, quite unintentionally, scale.
This last go-round started with something that occurred to me at home, watching my daughter get a snack. 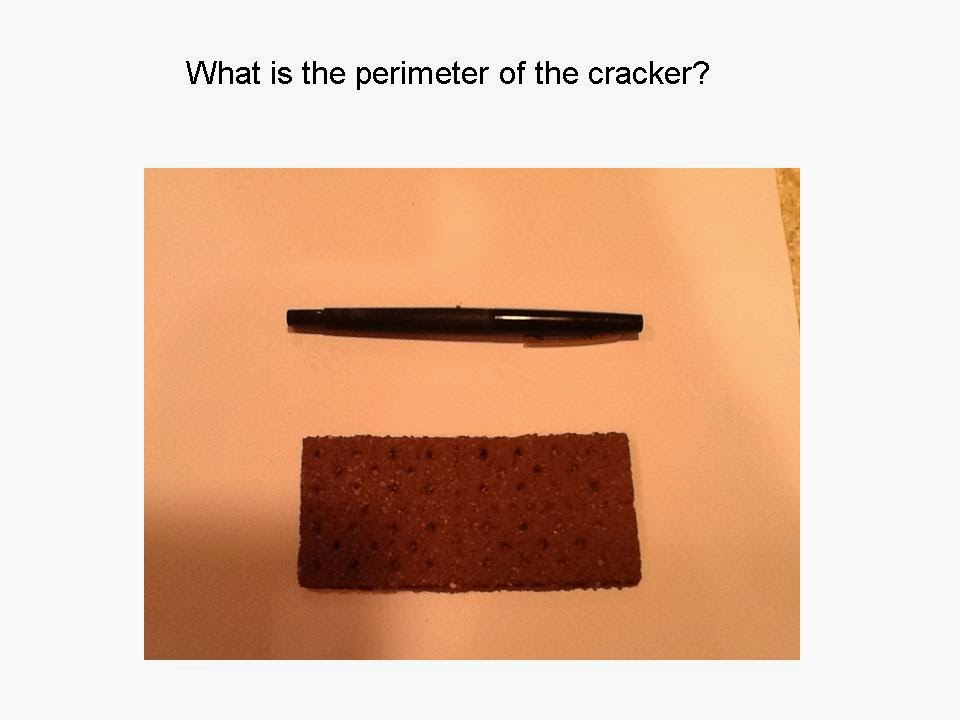 My idea was to just throw it up there, with no review of perimeter or mention of what units to use.  I was curious to see what would happen.  Within a few seconds several hands shot up:
Students: What's perimeter again?
So a quick review.  Then:
Students: What units should we use?
Me: What do you guys think would be good?
Students: Feet!  Inches!  Centimeters!  Meters!
I was relieved that at least they were all linear measures, but clearly we needed work on choosing appropriate units.  After looking at a meter stick, and a 12 inch ruler, we narrowed it down to centimeters or inches, and I told them we were going to use inches as our unit.
They made their number lines, with their too low and too high boundaries, and just right estimates.  Then I showed them the reveal:

There were cheers, groans, sighs, and audible expressions of puzzlement.  It was clear we had some work to do, and here's what arose from the class discussion: 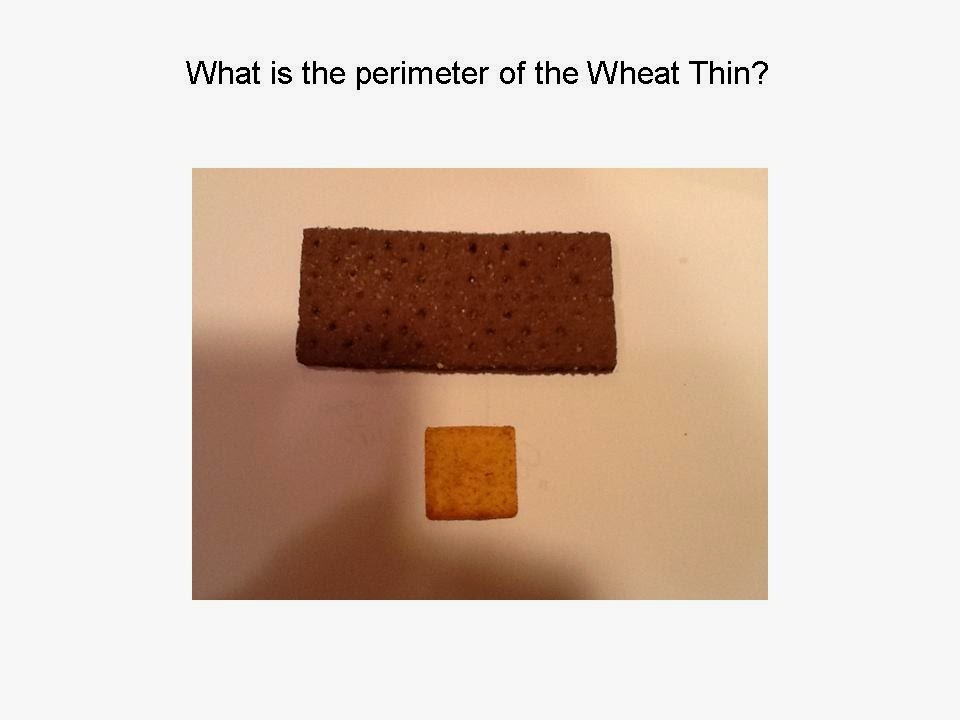 After discussing some too lows and too highs, a girl in the back volunteered her "just right" at 4 inches.  When asked why, she explained that she drew the wheat thin in her notebook, and figured each side to be 1 inch long.  She was close:

I loved that the girl had drawn a picture of the wheat thin in her notebook, and we all took a look.


Working with the idea from the previous day, I asked the kids to draw out a diagram of the Club Cracker and estimate the side lengths.  After a few minutes, I asked for some perimeter estimates, and was surprised to hear a response of 5 inches, which was the answer from the previous day.  I wondered how, given the visual, a student could come up with the same perimeter for both crackers.  A quick look at her book revealed how: She had drawn a picture of the cracker and measured the sides of the picture!
Clearly there was some confusion.  Is it possible that in the student's mind there are actually three crackers: the actual cracker, the picture of the cracker on the smartboard, and the picture of the cracker drawn in their notebooks? Hmmm.  So this is what led us to a discussion about scale.

I liked this one because it was a triangle, and provided another opportunity to add mixed numbers.

Day 5 was another hamantash, this one a little larger.  Which led us into...


Again, we talked about scale (on the smartboard, the side lengths measured around 22 inches), and the importance of using the wheat thin (the side lengths of which had already been established) as a "ruler".

We then proceeded to finish off the perimeter series with three whiteboards: a 12" x 9" student whiteboard, a larger one attached to an easel, and finally one mounted on a classroom wall.

So in addition to building number sense, we had also touched on perimeter, adding mixed numbers, selecting appropriate units, measurement equivalencies, scale, and classifying two dimensional shapes.  What I loved about it all was that the concepts arose naturally from the activity.  As we move into a unit on perimeter (and area) in a few weeks, I am curious to know what effect this will have on their understanding.  I am becoming more convinced that we can pre-teach, preview, re-teach, and reinforce many skills and concepts in very meaningful ways by embedding them within these estimation activities.

Posted by Joe Schwartz at 5:20 PM No comments:

Trying to Make Some Sense Out of Long Division

Raise your hand if you look forward to teaching long division.  For me, anticipating long division time in grade 4 has always left me with a sinking feeling.  Jeff, Shannon, and I have tried many different strategies, sequences, and procedures, and though most kids ultimately learn how to divide using the traditional algorithm, too many seem to struggle.  So this year we decided to try something new.
I was inspired by  Nicora Placa's post on tape diagrams.  It seemed like a natural fit, because the kids were already comfortable using the diagrams to solve "fraction of"problems, which I've blogged about here.  I envisioned the move from a partial quotients algorithm to a traditional algorithm unfolding in phases.  So we start with a division problem: 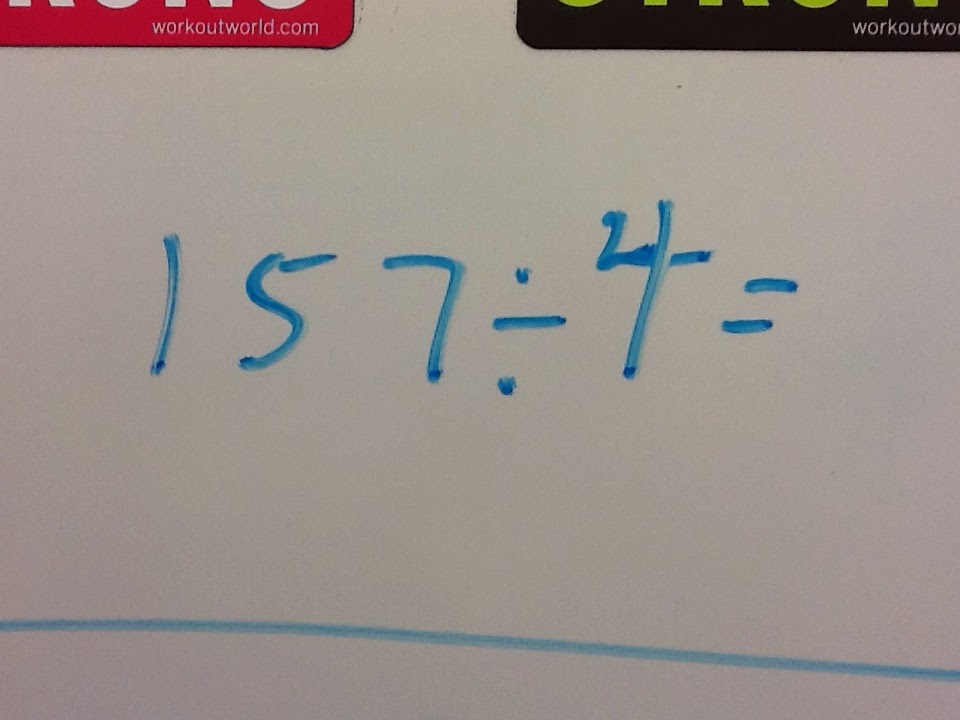 
We did some guided practice,then it was on to...

Jeff did a great job keeping track of which students were successful and comfortable with which method and assigned some differentiated homework.  We grouped them up all week, moving kids around depending on which method they were comfortable working with.


Friday was assessment day.  I was curious to see what the kids would do.  Here's what I found:

Not all of it was completely accurate, but Shannon, Jeff, and I all agree that we are much farther along with getting them all comfortable with the traditional division algorithm than we have ever been before.
Here's what I liked about using tape diagrams:

Here are some issues:
For our first time through, I think I'm pretty happy.  Thoughts and suggestions are encouraged and appreciated!