Around this time of year, when the temperature really starts to drop and mornings become frosty; when the leaf blowers finally go silent and the smell of chimney smoke begins to pervade the block; when most of the houses in the neighborhood dress themselves in lights and wreaths and the lawns fill up with reindeer, snowmen, sleds and Santas; it's right around now that in one bay window there invariably appears a strange sight: 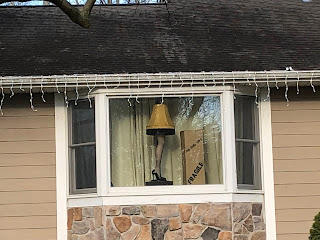 This is the notorious leg lamp, made famous in A Christmas Story, the popular holiday movie co-written and narrated by the legendary humorist Jean Shepherd, and based on the semi-autobiographical reminiscences he related in print, in his radio monologues, and in live performances.  Initially overlooked when it was released in 1983, the film now consistently ranks among the top holiday movies ever produced.  Many know it from TNT and TBSs "24 Hours of A Christmas Story", where it is shown 12 consecutive times, from 8 pm on Christmas Eve to 8 pm on Christmas Day.

Passing the house on my daily morning walks, I'm reminded of Jean, and the small part he played in my childhood and adolescence.  Jean (he was widely known as Shep, but to us he was always Jean) was friends with my best friend Mike's parents, and he could frequently be found visiting their house on Skyline Drive, where I was also a frequent visitor.  With the same last name as his erstwhile childhood best friend, we had an immediate connection.  I picture him sitting at their big kitchen table, chuckling "There's that Schwartz again," as I passed by on my way up to Mike's room.  He would often attend Mike's birthday parties; I remember one in particular when he accompanied us all to Shea Stadium to see the Mets play the Reds.  At first, I had no idea who he was, other than that he was some kind of special family friend.  But after piling into the back of Mike's family's puke green station wagon for a trip down to Princeton to see him perform at McCarter Theater, I was hooked.

Jean had a nightly radio show on WOR, where, after the opening theme (Eduard Strauss's Bahn Frei!), he would spin his incredible monologues, and occasionally read poetry, play the kazoo, and organize listener pranks and hoaxes.  I started tuning in.  Rushing to finish my homework in time, I would sit in my bedroom, listening to the sound of his distinctive voice coming through a little clock radio with the dial at AM 710, entranced by the way he would start out on one path and veer through numerous digressions, twists and turns.  With my eye on the clock, watching the digits click by and knowing that time was running out, I would try to guess how in the world he would tie everything together.  But like Coltrane coming back to earth after flying off into outer space at the end of My Favorite Things, he always did.  And every time one of the stories would refer back to his childhood and his friend Schwartz, as they often did, well, that was an extra special night.  The next day Mike and I would compare notes, because I knew he had listened, too.

Jean's books were also a constant presence, especially Wanda Hickey's Night of Golden Memories.  (My original copy became so tattered that the pages started falling out, and I eventually had to get a new one.)  I read and reread the stories, and then read them aloud to my brother, sister, and parents.  Schwartz, Flick, Kissel, Grover Dill, Scut Farkas; they were all alive in our house.  We had next door neighbors who, for reasons that will go unstated here, we referred to as the Bumpeses.  The leg lamp?  We knew about that from Chapter 10 of In God We Trust: All Other Pay Cash  before we saw it in the movie.  Of course there was The Ferrari in the Bedroom, which was dedicated to Mike's parents, with Mike's dad being the inspiration behind the main character in the story Abercrombie's Bitch.

After his radio show ended in 1977, it got harder to find him on the air (remember, this was the cable stone age and way pre-internet), although he did write, direct, and edit a show called Shepherd's Pie on New Jersey Network for a time. Mike and I went away to college, his parents divorced, my parents moved to another town.  Jean moved to Florida and I never saw him again.  But I was really happy to see him find mainstream success and recognition with A Christmas Story.  Now, like Proust's madeleine, seeing the lamp in the window brings back a cascade of memories: my childhood bedroom, the WOR radio days (we loved Bob and Ray too), and of course my best friend Mike, who idolized Jean and who I believed Jean loved.  Mike, a journalist by trade, had plans to write his biography.  However it was not to be-- Mike was tragically taken from this world 18 years ago.  (Mike, I miss you every day.  Excelsior, you fathead!)  So if you're a fan of A Christmas Story, and that's all you know of him, do yourself a favor and google Jean and do a little research.  Read about how influential he was.  (Jerry Seinfeld has been quoted as saying, "I learned how to do comedy from Jean Shepherd.")  Listen to some of his recorded monologues.   (Think of them as podcasts.)  Watch him being interviewed by David Letterman in 1982 (where he explains his failures in Algebra class.)  And always remember: Flick Lives!