"Count Be Wrong, They'll Mess You Up."

One of the most unforgettable characters in David Simon's epic masterpiece The Wire is Wallace.


A low-level drug dealer in the Barksdale crime organization, the sensitive 14 year-old, not much more than a child himself, also acts as a "house dad" to a group of stray youngsters living in an abandoned Baltimore tenement.  He rousts them out of bed in the morning, makes sure they have something to eat, and sees them off to school.  In a scene that takes place late in Season One, he tries to provide some homework help to one of the children, Sarah.  She's having difficulty solving a word problem, which Wallace reads back to her from her textbook:


"Just do it in your head," Wallace tells her.  Distracted by another conversation he's carrying on with a housemate, he impatiently dismisses her when she comes up with two wrong answers, first seven and then eight.  Finally, (and edited for language):

Wallace (focusing): Close your eyes.  You working a ground stash.  Twenty tall pinks.  Two fiends come up and ask for two each, another one cops three.  Then Bodie hands you ten more, but a white guy rolls up in a car, waves you down, and pays for eight.  How many vials you got left?
Sarah (without hesitation): Fifteen.
Wallace (dismayed): How can you keep the count right, but not do the book problem?
Sarah (matter-of-factly): Count be wrong, they'll mess you up.

Here's Jemele Hill commenting on the scene on her (and Van Lathan's) excellent Wire rewatch podcast Way Down in the Hole:

I thought that was a great way to show how potential is being wasted.  A good reminder about testing 'cause we've all grown up having to take SAT tests, ACT tests, we had the MEAP test when I was in Michigan, the proficiency exams, and those tests and those problems they're so unrelatable to the kids who are actually taking the test.  And this was a very subtle way to make a statement about the cultural inequalities that these tests and the educational system present to children.


Hill's analysis of Simon's point, which he will develop in depth in Season Four, is well taken.  (One disagreement: it's not very subtle.)  And it's one that has been discussed and argued about for at least as long as I've been in the field.  Questions and debates related to student engagement with mathematical content, pseudo-context and "real world" problems, true intellectual need vs "you need to know this because it's on the test", how we measure mathematical proficiency and intelligence, the implicit and explicit biases embedded in our curricula and our practice-- these are all encapsulated in this one small scene.
The bus scenario from Sarah's math book is downright tame compared to others we've seen.  Consider Dan Meyer's classic dog bandana.  Or Cathy Yenca's diner sign:


How about Geoff Krall's trail mix: 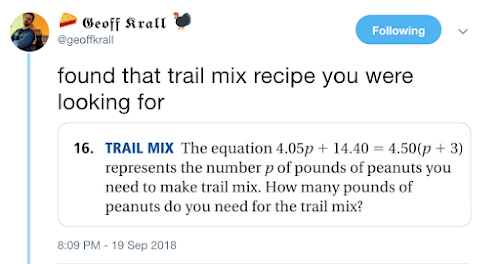 They leave us shaking our heads in dismay.  And they'd be hilarious if the stakes weren't so high.
But here I'd like to explore Hill's analysis further, because what's happening here goes beyond simply transcribing Wallace's problem and substituting it for the bus problem in Sarah's textbook to make it more relatable.  For one thing, the bus problem is not contrived, like the dog bandana, diner sign, and trail mix problems.  I mean, it's contrived for math class, but it's not that much of a stretch.  After all, buses do pick up and discharge passengers at bus stops.  Growing up in an urban environment, we can assume Sarah has a frame of reference for a city bus picking up and discharging passengers.  And for the sake of the discussion here, let's also assume that she can read, and that the issue is not one of comprehension.  So why would Sarah have so much trouble with the bus problem?  It's not the arithmetic.  Is the bus problem one she can't relate to?  Just because buses exist in the real world does it necessarily follow that the problem is real for Sarah?
The reason Sarah gives Wallace for her ability to solve his alternate problem is "Count be wrong, they'll mess you up."  Sarah, whose after-school activity is running back and forth between a Barksdale drug stash and the customers, understands that an error on the count has very real, very dangerous consequences.  This is intellectual need in the extreme.  For her, the stakes of mentally adding and subtracting couldn't be higher, and the stakes of correctly solving the book problem pale in comparison.  She's got more things on her mind than buses.  Wallace, who throughout his time on the series shows real intelligence and curiosity, connects the bus problem to the ground stash problem in order to make it more meaningful.  He would excel in a school setting.  Sarah cannot make that connection.
The math Sarah does outside of school, the math any of us do outside of school, arises organically from the situations we find ourselves in.  We may or may not recognize them as overtly mathematical, and their consequences may range from critical to trivial, but they're there: in the work we do in and around our homes, in our jobs, in what we choose to do with our leisure time.  For our students, especially our young ones, it most likely arises from simple play.  Let's call it "math in the wild."  But there's a wide gap between that math and the math that we encounter in school.  Good teachers try to bridge that gap as best they can, and some students (i.e. Wallace) can bridge that gap for themselves.  But the gap remains, especially on assessments, especially, as Hill notes, on high-stakes standardized assessments. Unfortunately, it's the performance on those measures that generate our grades and our scores, our opportunities for further educational advancement and, perhaps most important, our feelings of self-worth as learners and human beings.  Sarah will likely fail her next math test.  But it won't be because she can't add and subtract.  So what does her performance on the test really mean?  Wallace, who in an alternate universe would be in honors classes, no longer even attends school.
Sarah's situation, like so many others in the show, is a human tragedy.  Growing up amidst the violence, poverty, insecurity, systemic racism and trauma that is the Baltimore depicted in The Wire, she faces much bigger obstacles than a word problem in a math book.  It's just one small piece of Simon's complex tapestry.  But the "wasted potential" Hill is talking about in this particular scene is one that transcends Simon's Baltimore.  It happens everywhere students who are smart and capable are meant to feel "less than" in math class.
Fans of The Wire know what happened to Wallace.  Here's David Simon in Jonathan Abrams's oral history of the show All the Pieces Matter:


People are going to remember Wallace.  Wallace is going to bother them for a long time after the whole show is forgotten.

He's right.  Around for only one season, his impact is felt throughout the rest of the show's run.  But here's what I'd like to know: What happened to Sarah?