First on my to-do list when I got back from TMC '16 was get a new notebook, because in Minneapolis I learned that real mathematicians go graph ruled.


Day 1 of Tessellation Nation. Michelle Niemi  is hard at work with a folded piece of paper and a scissors.  "I wonder if I could get a snowflake to tesselate?"
I'm sitting next to her, deep into Christopher Danielson's turtles.  "I don't know," I tell her.  "But someone here probably does."
Enter Dr. Edmund Harriss.  Co-author of Patterns of the Universe, researcher, professor at the University of Arkansas, and all-around great guy, Edmund would later blow my mind when he explained to me why a square can have wiggly sides and 72 degree angles.  But now he's got a problem to work out.
I watch him sit down next to Michelle.  After listening to her for a few moments, he takes out a pad of graph ruled paper and a pencil. 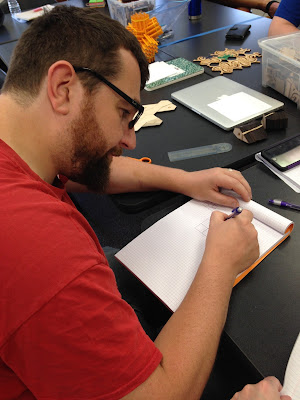 Putting the turtles aside, I turn my attention towards Edmund as he begins to explain to Michelle how he is going to accomplish this task, getting a snowflake to tessellate.  He starts drawing squares.  He's visualizing the folds.  He's marking where to cut.  He sees symmetrical designs in his mind's eye.  Mid-summer, and it's snowing in his head.   Michelle has questions.  She wants to know what he's thinking.   So do I.  Edmund is patient.  What's clear to him isn't clear to us.  He's got to go over it several times.
And it occurs to me: I am watching a real mathematician solve a problem.  And it's thrilling!   Because I've never been this close before!  I'm not sure I really understand what he's talking about, and I don't care!  I'm just caught up in the excitement of watching him work.  And I think to myself, "This is what mathematicians do.  They solve problems.  On graph paper.  I need a graph ruled notebook.  And I need to stop thinking of myself as only a math teacher.  I need to be more of a math doer."
Edmund finishes.  He takes a piece of paper, folds it into squares, and makes the cuts.  He's left with the pieces of a snowflake.
"You could have every child in your class cut one of these out, and put all the pieces together to make a tessellation."


Once I started looking, I saw graph-ruled notebooks everywhere.


I love my new notebook:


Up until last month, the closest I'd ever come to watching real mathematicians at work was at the movies.  Both real...

One of the great thrills of TMC is getting to watch real mathematicians do their thing live and unplugged.


So, nearly a month after it ended, I've finally found my #TMC1thing.  It's to put as much effort into doing math as I do into teaching math.  On a vertical non-permanent surface when I can, on a napkin if I have to, but mostly in a graph ruled notebook.  Like real mathematicians do.
Posted by Joe Schwartz at 10:00 AM