Shooting Fish in a Barrel

Earlier this month Graham Fletcher and Joshua Greene got together for a tag team take-down of a textbook lesson on finding the volume of rectangular prisms:

Their analysis and make over suggestions are spot-on.  And I hate to pile on, but what makes this especially egregious is that exploring volume of rectangular prisms, a major grade 5 content standard, can be, well, fun!  Rich and I have had success with activities described here and here, and I'll offer up another one that we tried out with the fifth graders last year.
Andrew Stadel has written about the potential that starting arguments in math class has to  reinforce both practice standards (especially numbers 1 and 3) and engage kids in learning, and I agree.  For this project, I collected five boxes and asked the kids to guess their order from smallest to largest as measured by volume.  I didn't want the boxes to be too similar, just similar enough that it wouldn't be too obvious.

With the intellectual need now built, it was time for the kids to resolve the dispute.  They first had to estimate the volume of each box...


And, due to faulty measuring, improper rounding, and incorrect number crunching, the argument continued to rage!  In fact it took several days for the class to come to agreement on the volume of each box and the correct order.  But they were days filled with engagement, collaboration, discussion, and multiple content and practice standards.
The activity isn't all that imaginative, and it's not that hard to prep for.  All you need are some boxes, rulers, and calculators.  And while it's not as easy as asking the kids to take out their books and do this... 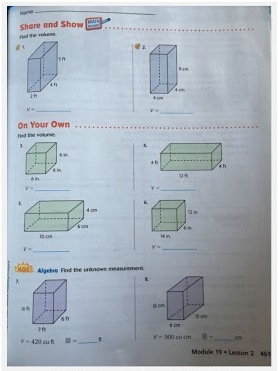