Standards for Mathematical Practice and the Cinema, Part 3

In the first two installments of the series Standards for Mathematical Practice and the Cinema, I  explored how SMP 6 (Attend to Precision) played out in two classics: This Is Spinal Tap and March of the Wooden Soldiers.  I'd like to turn my attention to a different practice standard, SMP 5 (Use Appropriate Tools Strategically), and one of my favorite movies of all time, Hoosiers.
The film, released in 1986, is loosely based on the true story of tiny Milan High School's Cinderella run to the 1954 Indiana state basketball championship. It stars Gene Hackman as Norman Dale, a disgraced, temperamental ex-college coach seeking redemption...


And the late, great Dennis Hopper as the alcoholic assistant coach "Shooter" Flatch.


The Hickory High basketball team responds to Dale's unorthodox coaching methods.  They make an improbable march to the state basketball championship, and face increasingly more difficult competition along the way from schools much larger than their own.  The team is used to playing in their small, claustrophobic high school gym... 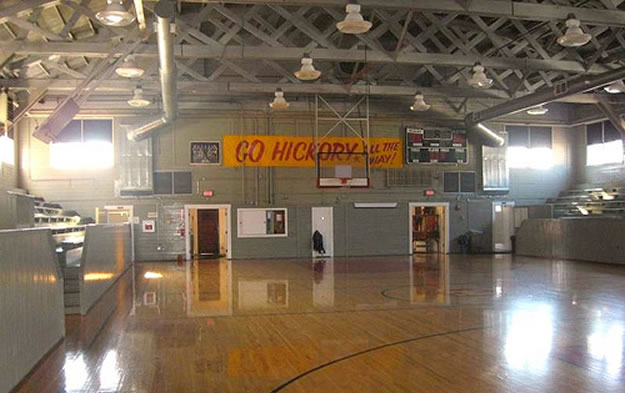 ...and are visibly shaken upon entering cavernous Hinkle Field House, on the campus of Butler University in Indianapolis, where the championship final is to be held.  Afraid that his team will be intimidated by the size of the arena and become mentally psyched out before the game even begins, Coach Dale employs a wily teaching move:

So was the tape measure responsible for Hickory's last second 42-40 win over South Bend Central?  If so, it played a very small part.  Because we all know who the real hero was: