That's What He Said

"I really hope you can see how what we're doing here is taking a compelling question, a compelling answer, but we're paving a smooth straight path from one to the other and congratulating our students for stepping over the small cracks in the way.  That's all we're doing here.  So I want to put it to you that if we can separate these in a different way and build them up with students, we can have everything we're looking for in terms of patient problem solving."

Another example of some surgery, this time in first grade, as Nicole and I do our best to follow Dan's advice.   After an opportunity to explore combinations of 10 with ten frames and red and green counters, the kids are presented with a problem to solve.

Here was the opening suggested by the manual:

I suggested we take off the question, simply present the table, and ask for some noticings and wonderings:


The kids came up with some interesting observations, including:


And the wonderings:
OK, the question is not exactly there.  So I combined the wondering about the missing numbers with the noticing about the numbers of red and green apples adding up to 10 to set their task: find all possible combinations of 10.

Here's what the manual wanted the teacher to give the kids:


Nicole and I decided to take a page from Tracy Zager's playbook.  The plan was to pair the kids up and let them have at with counters, ten frames, and blank pieces of paper.  We would stop for a mid-workshop interruption that would take the form of a gallery walk.  Seeing the way their classmates organized their work might inspire students to evaluate what they were doing and perhaps modify their strategy or change course altogether.

Here are some other attempts: 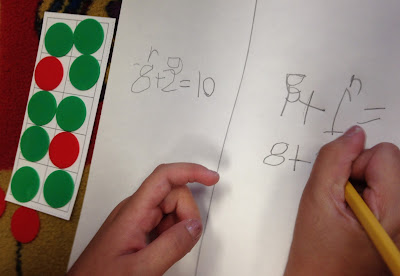 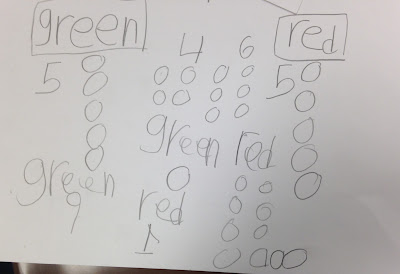 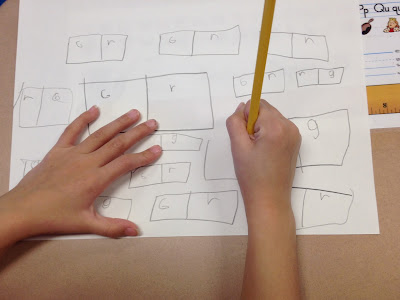 There were as many variations as there were groups.  But this attempt, from one of our most at-risk students, might have been my favorite:


At the end of the day, no one found all the ways to make 10.  Does that mean the lesson was a failure?  I say no.  There's time enough to talk about the most efficient and effective methods to record and keep track of work.  The kids were engaged in a messy, beautiful struggle, experimenting, devising systems that made sense to them, building intellectual need.  Why rob them of that opportunity?  Why rob ourselves of the chance to discover what's going on inside their amazing minds?
Close to 6 years, over 2,000,000 views, and 32 languages ago, Dan urged us to, "Be less helpful."  What does that mean?  When possible, let the students generate the question. Give them the time and space to explore the mathematics in ways that make sense to them.  Watch, listen, and learn.