At Play in a Mathematical Sandbox

One of the highlights of this past summer's Twitter Math Camp was the chance to attend a session led by Federico Chialvo.


Federico is the Director of Mathematics at the Synapse School in California.  He also plays professional ultimate frisbee for the San Francisco Flame Throwers.  (Who knew there was such a thing?  He even had to leave TMC early because he had a play-off game!)  I had read some of his blog posts, and we tweeted back and forth a few times last year.  I knew we shared an interest in the potential that games and game-like activities have to engage kids in learning.  So I was excited to meet him in person and learn something new to bring back to my school.
One of the activities that caught my attention was called Subtraction Reversal Mysteries: 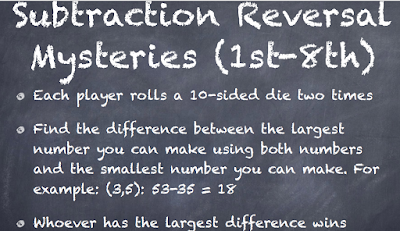 Federico gave us time to experiment with the game, and led us through some guided discovery.  He showed us student work samples he had collected from a post he wrote describing his experience using the game with his class.  I was attracted to this activity for several reasons:
I felt it would be perfect to use with a third grade class at the beginning of the year, both to review multi-digit subtraction and introduce the idea of looking at data and making conjectures.
Back in school I approached Shannon, whose third grade class I'm working in this year.  She agreed to let me try it out, and armed with some 10-sided dice I gave it a go.

One pattern I saw in their mistakes involved regrouping when there was a 1 in the ones place:


So we were able to gather some good formative assessment information on their abilities to subtract, and jump in with some direct instruction.  Several days later I brought their papers back and let them continue to collect subtraction problems.
During the third session, I asked some kids if they noticed anything interesting happening with their subtraction problems.  One girl explained that when she rolled two numbers that were right next to each other, the resulting subtraction problem had a difference of 9. I asked her for an example:


During the session, Federico spoke about the importance of providing students with a "Mathematical Sandbox" in which to explore, play, and create: 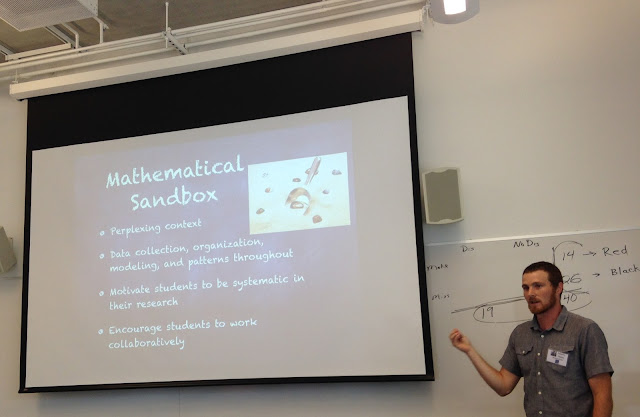 I like everything about this, and an activity like Subtraction Reversal Mysteries is a wonderful example.  Everyone in class is playing in the same sandbox.  Some are playing together, some alone.  Some are building very intricate castles, others are simply filling pails and digging holes.  But they're all in there together.  It exemplifies the MTBoS ideal of an activity with a low barrier to entry that scales up high.
Federico had lots more examples of sandbox activities that he had us try out during his presentation.  I look forward to experimenting with more of them as the year unfolds.