It started, as it so often does, with an estimation180 prompt.  A "do now" that leads to an unexpected place.  An innocuous math message with a powerful punch.
A few minutes late to grade 5, and Rich's AM class, all 21 of them, are already busy at work on Day 201: 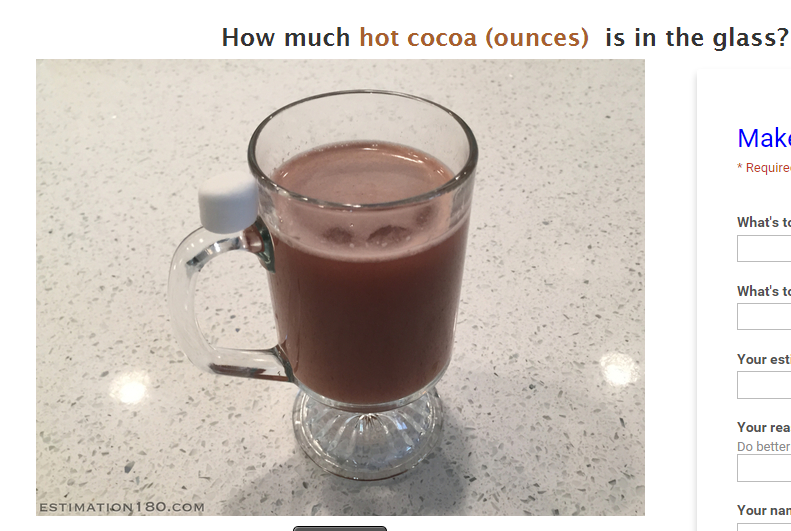 This particular opening routine is well established.  Draw an open number line.  Plot a "too low", "too high", and a "just right" estimate.  Provide justification.  Turn and talk.  Share some responses.  This takes maybe 5 minutes.  And the reveal: 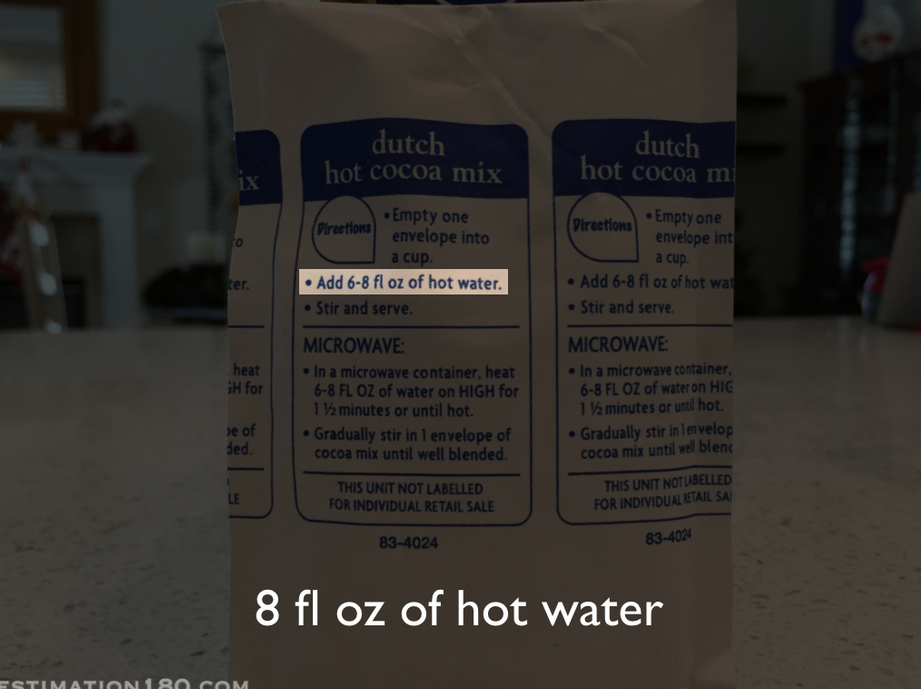 Cheers, groans, and purposeful talk as the kids place the actual measure on their number lines.  And with the picture still up on the SMART Board screen, the kids get ready to begin a round of guided groups.
Now there are many ways to structure time in math class.  But when we use the guided group model, I like to try, whenever possible, to start with a quick whole class activity, break about half-way through with a short, whole class "mid-workshop interruption" (something I stole from my ILA colleagues), then end back together as a whole class for a wrap-up.  The opening activity, as well as the guided groups, should be planned in advance.  This is also true for the mid-workshop interruption and lesson close.  But a good teacher should be ready to change on the fly, and allow the teaching points for the mid-workshop interruption and the wrap-up to be informed by what he or she sees happening during the day's activity.  These are times when concepts can be reinforced, misconceptions addressed, and classwork analyzed.
On this particular morning, when the clock strikes noon, Rich and I give each other a look, a look that means: "You got anything for the mid-workshop?"  Nothing of any significance has come up with the kids I've been working with and, as I watch him shrug, it seems the same can be said for him.  My eye catches the picture of the hot cocoa reveal still up on the SMART Board, and I've got it.
I nod to Rich.  He gives the groups a two-minute warning, and soon they're all back in their seats.

Me: Take a look back at the picture on the SMART Board.  We know that the cup has 8 fl oz of water in it, but the package says we could use 6-8 fl oz.  What does that mean?
Them: There's enough cocoa mix in the package for as small as a 6 and as much as an 8 fl oz glass.  Maybe some people like their cocoa stronger than others.
Me: Let's count from 6 to 8.  If Ryan says the number 6...(here I point to the student sitting in the first seat at the first grouping of desks to my right and sweep my hand around the class)...and we count all the way around the room and end with Kelly who will say 8, what will we have to count by?  Who will say 7?  Turn and talk to your table and figure it out.
The class is pretty sharp.  It doesn't take them long to figure out that because there are 21 of them, and because Ryan will say 6, they will need to take 20 steps to 8.  Ten tenths will get them to 7 (that's Jake), and then ten more tenths will get them to Kelly at 8.  It works!


The kids got back to work, moving through their group rotations.  And to wrap up the morning, we spend the last few minutes of class talking about the advantages of writing in decimal notation: 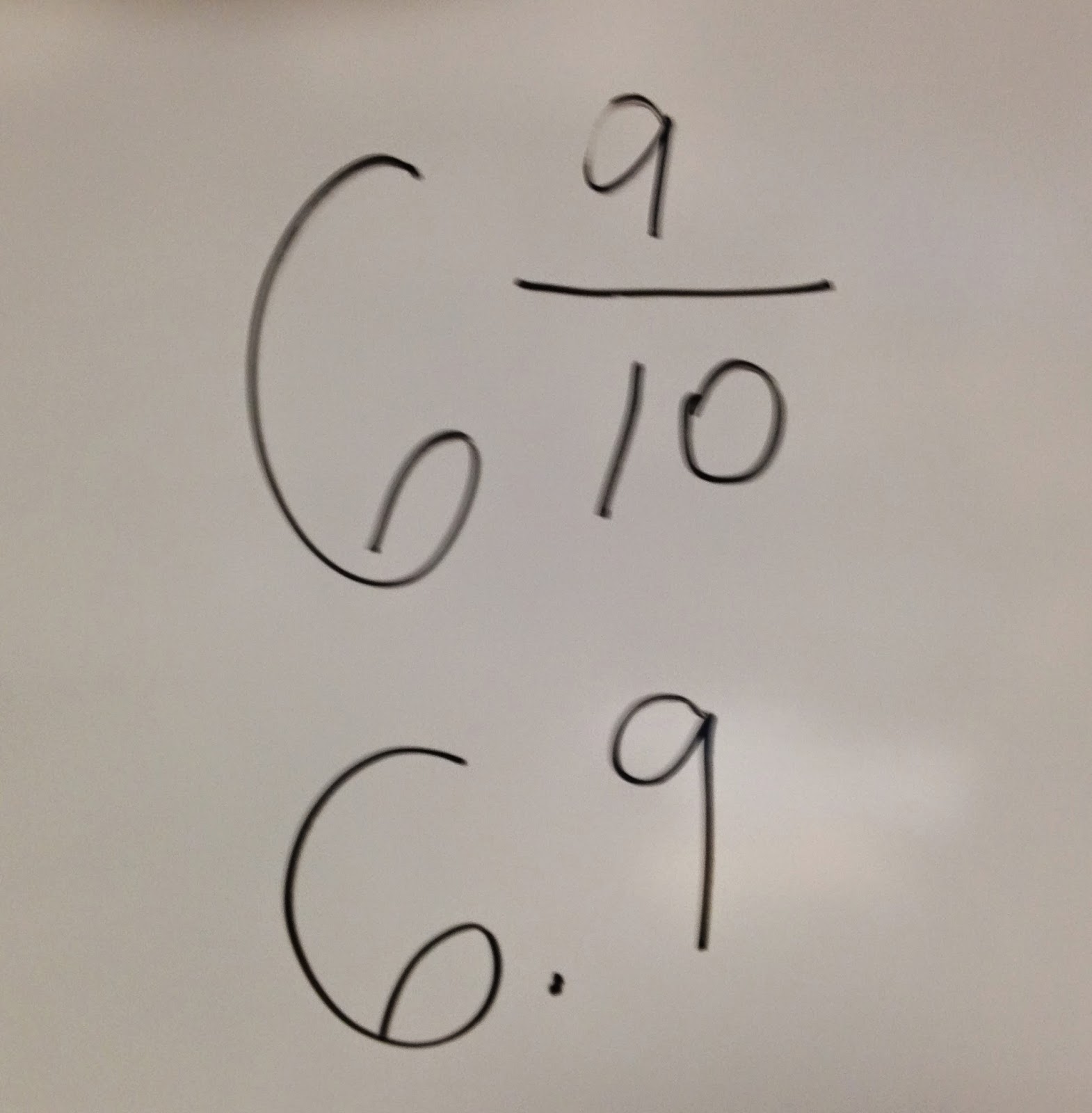 There are 19 kids in the PM class, and they follow the same routine, with the same counting circle activity for the mid-workshop interruption.  This time, however, the results are quite different.  The kids cannot agree on the appropriate counting interval:


There was nothing left to do but try each one, and hope they could, by trial and error, come up with the correct response.

This process took up much more time than we had anticipated.  We decided to make hay by shortening the meeting time for the final guided group session and ditching the wrap-up, an example of the flexible decision-making that goes on in classrooms every day.  All told, I felt it was time well spent.
That evening, reflecting on the counting activity, I was plagued by a thought:  What if there had been an even number of kids, say 20?  What would we have done?  Did we just get lucky? 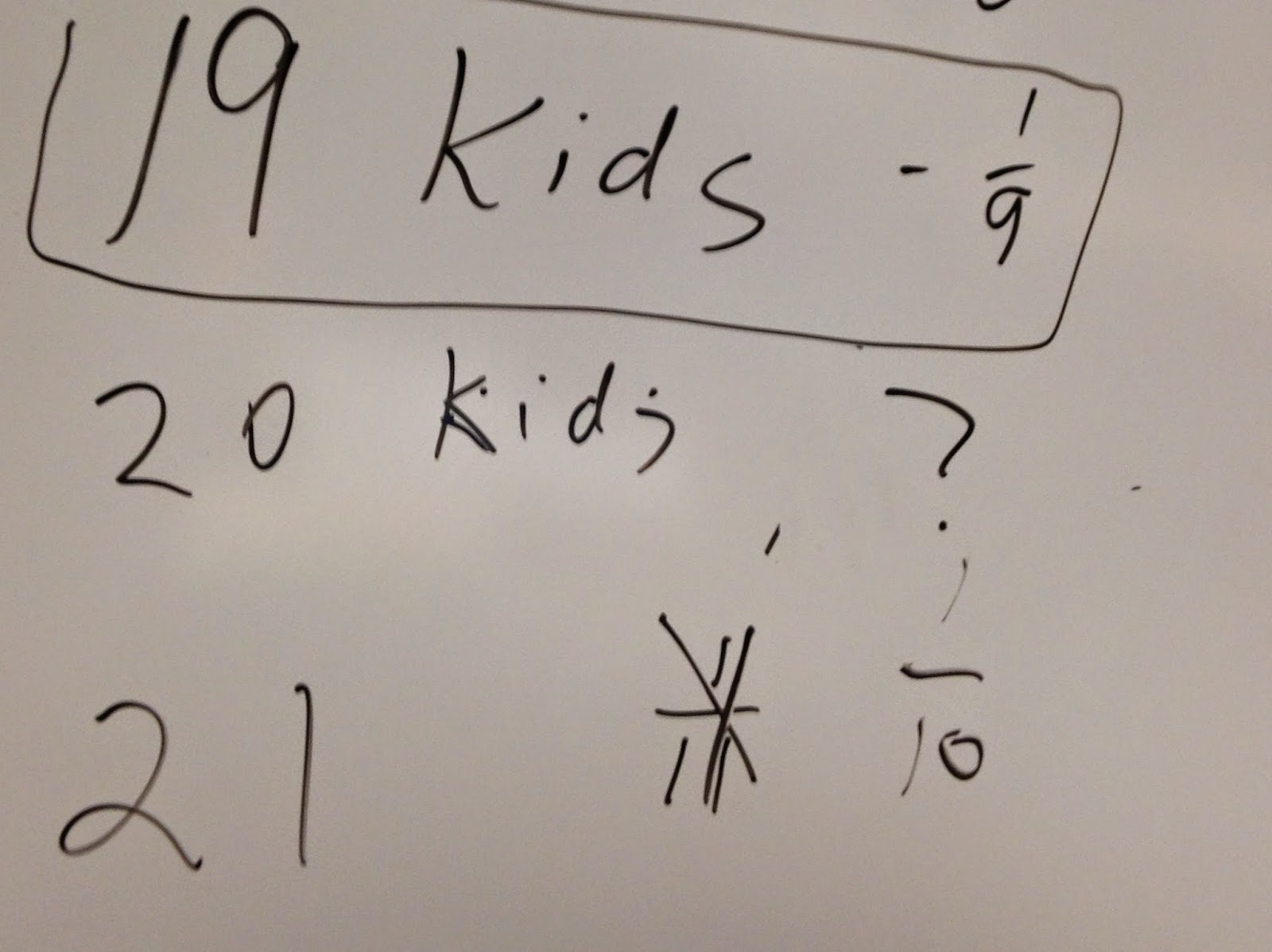 I spent the next few days trying to puzzle this out.  My somewhat inelegant solution was to split the difference between ninths and tenths and count by "nine and a halfths".

Nevertheless, it didn't seem appropriately math-like to me.  So, as I have in the past when I get confused, I asked my supervisor for some help.

So yes, we did get lucky.  Score another point for the power of estimation180: from that one prompt we drew out a counting circle, a refresher on decimal notation, and an interesting problem solving experience for both the kids and their teacher; a teacher who now knows there's a lot more between 6 and 8 than just 7.