No First Graders Were Harmed Playing This Game

Up until several years ago, our district ran a vibrant remedial summer program, euphemistically called "Summer Academy".   I spent many hot and humid New Jersey mornings in classrooms, both with and without air conditioning, attempting to find ways to get third, fourth, and fifth graders interested and engaged with a math curriculum that, during the school year, had left them dazed and confused.
I knew what skills I needed to focus on, but was left to my own devices to figure out some new approaches.  This being pre-MTBoS, I ran to the nearest bookstore:

When the first grade teachers came to me last month with a request for a game to practice basic addition facts, I turned to an old Summer Academy favorite.


I made copies of the mats, put sets of 11 counters, along with dice, in plastic cups, and trudged down the hall to Jen's first grade classroom.  She had set up a center day, and "The Two-Dice Sum Game" was one of the stations.  I sat down on the carpet with the first group of kids, and asked them to make sure they all had 11 counters in their cups.  I quickly explained the rules, and we began placing our counters on the mat.

I won.  We played another round.  I won again.  And this scene was repeated with two more small groups of first graders as they rotated through the station.  There was some minor grumbling regarding the fact that I always won, but I didn't make a big deal out of it and they seemed to take it in stride.
I left the game with Jen, and took a look back at the notes I had taken.


What I had learned seemed interesting, but more than anything, I was left with a sense of guilt.  Did I take advantage of the kids by not explaining that certain numbers had a greater probability of turning up than others?  I had played the odds and won.  They had no idea that odds were involved and lost.  Could I learn something from this?  Could they?  I was curious to see how many of them would continue placing one counter on each number even after repeatedly seeing me arrange my counters in a different way and regularly win the game.  I decided to find out, and asked Jen if I could come back and set up shop again.  She agreed, and my experiment was on.  Over two days the following week, I played this game again and again with the kids in her class.

Then, late on Day 1 and into Day 2, kids started to break away from convention:

They were learning through experience that placing one counter on each number might not be such a good idea.  And I had some very close calls, but remained undefeated.  Until one boy, waiting patiently as I laid out my counters, put his in the exact same spots on his mat.
Student: I'll win at the same time that you win.
Me: How do you know that?
Student: Because our mats are exactly the same.

Smart kid.  Before I left, I gathered the class together and asked them why they thought I always won.  Their responses:


I found their thinking fascinating.  Although some ascribed my success to reasons that had nothing to do with probability, others showed an intuitive sense that something mathematical was happening, even if they didn't have the vocabulary to accurately explain what that something was.
Now the first graders are playing this game: 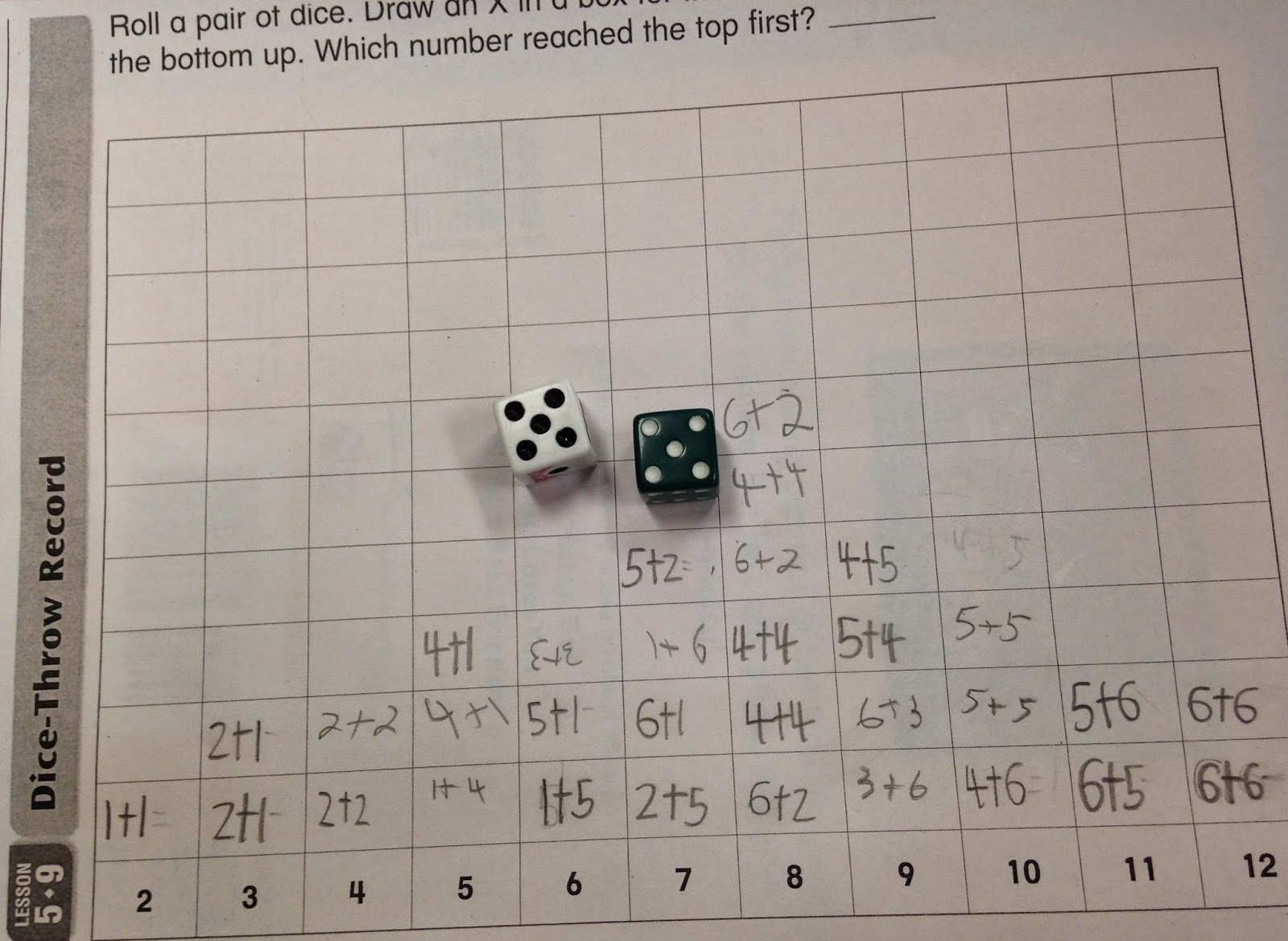 Will they be able to use the results to inform their decisions on where to place their counters when they play The Two-Dice Sum Game again?  At the end of last year, I made a commitment to spend more time in the primary grades, listening, questioning, observing, and learning from both the students and their amazing teachers.  Other responsibilities have kept me away from their classrooms for the past few weeks, but I am anxious to jump back in and find out.  Stay tuned!