My Confession, Part 2: I Am Saved by the MTBoS

This poster is displayed prominently in my room. 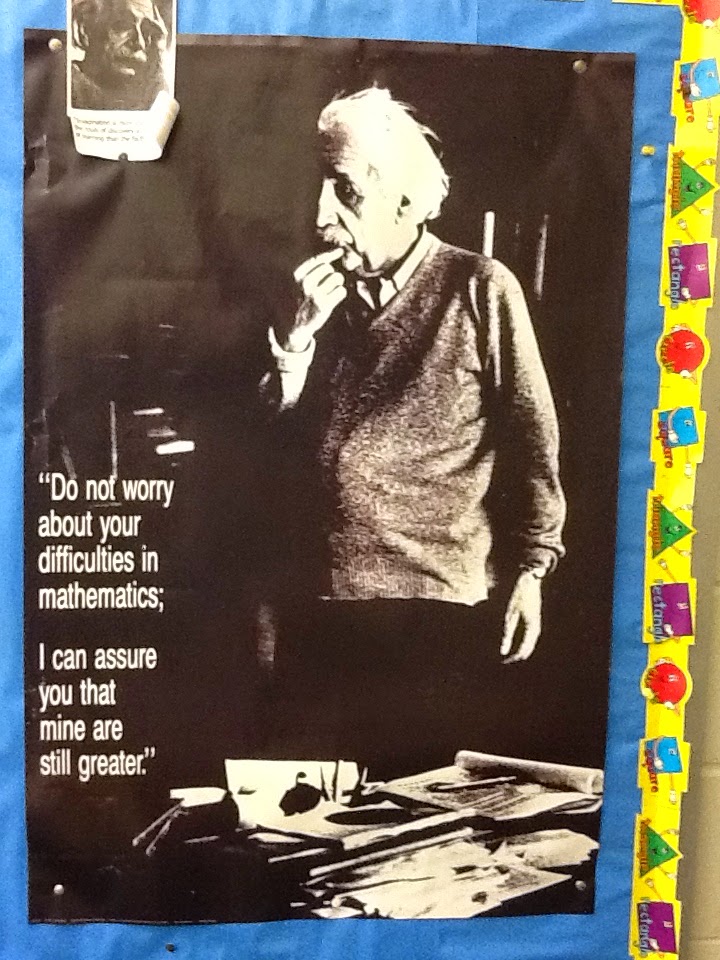 I tell my students that it's there to provide them with encouragement and hope, but really it's there for me.  It gives me comfort, even though I highly doubt Einstein had the type of dysfunctional relationship that I have had with math.

Several years ago I was plucked out of out of my elementary classroom, where for over 20 years I taught reading, writing, science, social studies, health, and, yes, math to 7 and 8 year olds.  I put up bulletin boards, made sure everybody got cupcakes and juice on birthdays, planned and took field trips to zoos and museums, drew smiley faces on papers, filled out report cards, did the million things, both large and small, that all elementary school teachers do.  And then one September it was over.
I was given the title "math specialist", a title that made me cringe, because my mathematical ability is by no means special.   But as long as the math didn't get too difficult, I had no doubts about my ability to help struggling learners.  In fact, I felt I had a small advantage; I could empathize with their struggle and perhaps be able to re-teach and explain concepts in ways that might make sense to them. For inspiration I looked to a familiar world, the world of sports.  I could be like Charlie Lau!

I spent the first several years in my new position mostly pulling kids, both individually and in small groups, out of their classrooms and back to my room for one-to-one and small group instruction.  We call this "basic skills".  I was patient. I was sympathetic.  I took out manipulatives.  We did journal pages together, maybe got a start on the homework.  We studied for unit assessments.  I did what I could to patch them through a curriculum that raced relentlessly forward and never slowed down long enough for them to catch up, then sent them back into the inferno.
Two years ago, something happened that changed everything.
One day,while surfing the internet for math resources, I followed a link to Dan Meyer's TED Talk: Math Class Needs A Make-Over.  There's a powerful sequence when he shows a page from a textbook...

...and then strips everything away until he's left with just the visual of the chairs going up the lift. 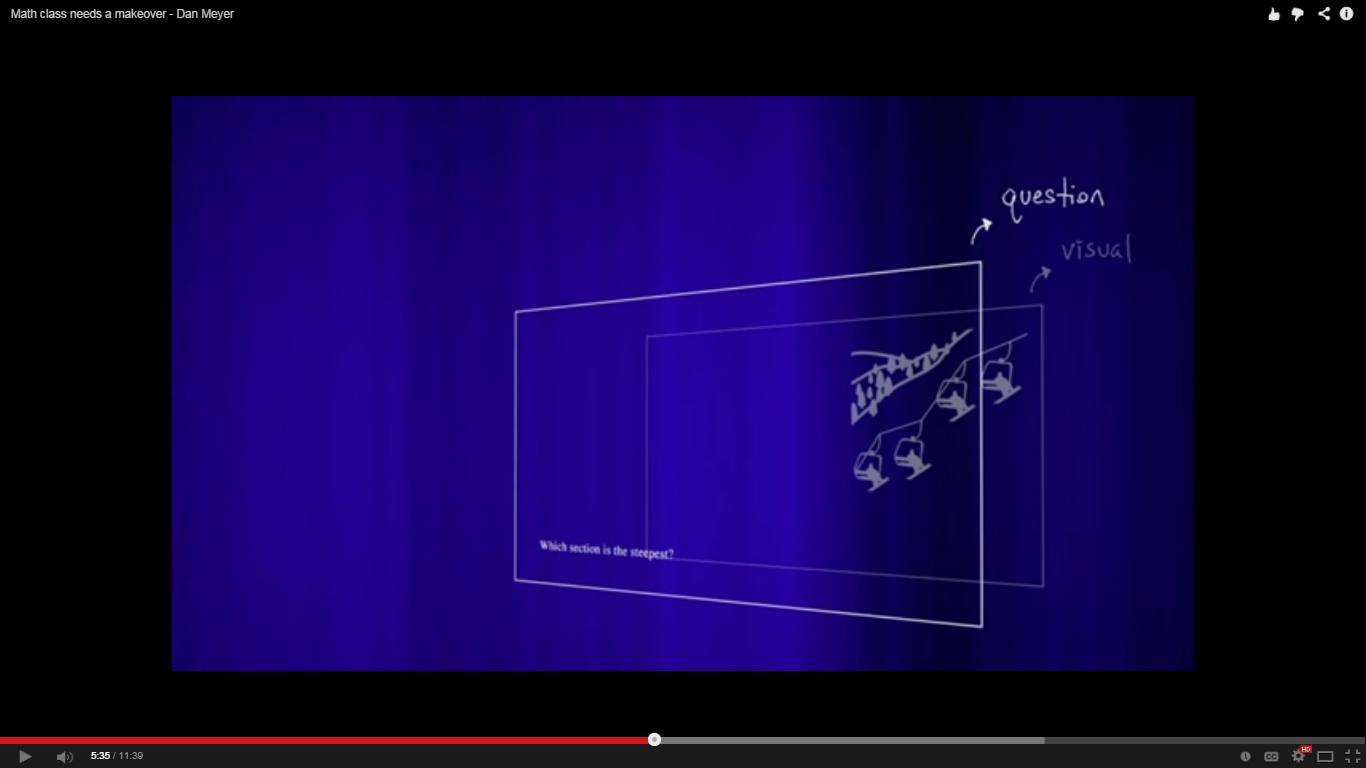 "Which section do you think is the steepest?" he asks.  That was a question I could answer.  It was a question anyone could answer.  You could just eyeball it and make an intuitive guess; you didn't need any "math".  I was hooked: how would we find out?  If there was math that would help answer that question, then that was math I wanted to learn.  Very powerful stuff for a kid who just wanted to crawl under his desk during math class.  I replayed the video over and over, and from there went straight to his blog, started at the beginning, and began reading.  I became convinced that if he had been my math teacher, things would have been much different, and realized that what I had been doing wasn't really teaching. 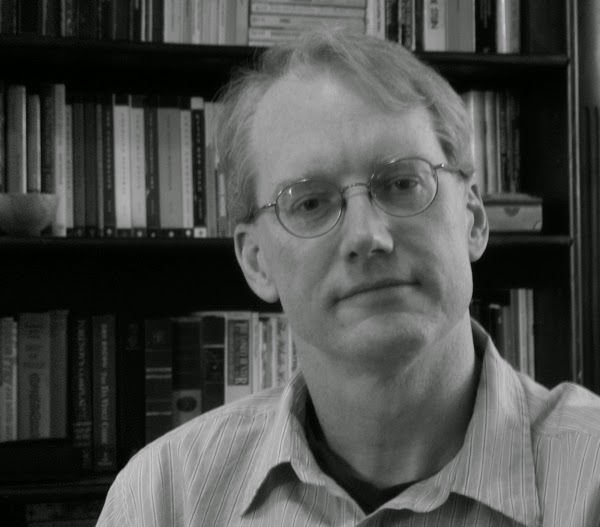 I remember reading it and thinking, "This must what it would've been like to read a samizdat in the post-Stalin USSR." I imagined math teachers passing worn and dog-eared copies to each other, one step ahead of supervisors waiting to confiscate the manifesto and denounce them as heretics.  I just couldn't believe that a real, honest-to-goodness math teacher would write something that was so damning of his profession and that so accurately captured my learning experience.   I wanted to cry when I read this:

...if I had to design a mechanism for the express purpose of destroying a child's natural curiosity and love of pattern-making, I couldn't possibly do as good a job as is currently being done-I simply wouldn't have the imagination to come up with the kind of senseless, soul-crushing ideas that constitute contemporary mathematics education.

It would be hard to overstate what this meant to me.  It meant that I had, somewhere buried deep inside, an ability to do math.  Maybe it was small, but it was something that could be nurtured and, given the right conditions, it could grow.   It had been crushed out of me all those years ago, but with some help it could be found again.

I suppose I followed a well-worn path: from Dan, who taught me about 3-Acts and intellectual need; to Andrew, whose work at estimation180 has had the biggest impact on my practice; to Fawn, whose humor,  humanity, and creativity  has helped me keep my eye on the ball; to Michael,  whose relentless and passionate search for meaning inspire me to dig deep; to Graham, an elementary compadre who keeps me company in a middle- and high school world.  And there are many others.  I took Jo Boaler's course, and learned about Carol Dweck's growth mindset research.  So it was true.  I could learn, not just how to do math, but maybe even to like math.  And if it was true for me, it could be true for all those other strugglers out there: the finger counters and the red x'ers, the fraction flunkies and the long division losers, the times table fist bangers; the confused, the lost, the drowning, and the already drowned.
So I joined a wild and wonderful community called the MTBoS. I lurked.  I started commenting on other people's blogs.  I started my own.  And I've grown more as a professional in the past two years than in the previous 25 combined.
There is another, smaller picture hanging in my room. 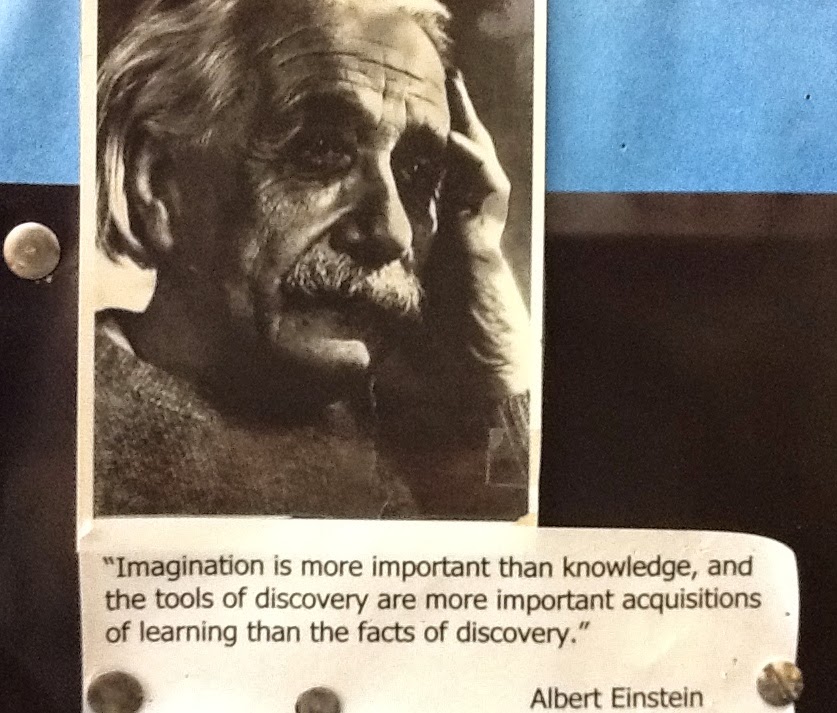 This one has been with me since my first years teaching.  But it has taken me all this time to realize that the words apply just as much to me as they do to my students.  We no longer have to use our imaginations to envision what engaging, exciting, and nurturing math classes can look like.  The teachers who are embracing and exploring new ways to make math meaningful in their classrooms are taking no small amount of risk.  But they are doing no less than what they expect of their students.  I am proud of them, and proud to be counted in their number.
School's in.  It's time to get back to work.