Making a Big Thing Out of it Would've Been a Good Idea: Practice Standard #6

Is there a better example of the importance of  Math Practice Standard 6, Attend to Precision, than the Stonehenge fiasco in Rob Reiner's classic "rockumentary" This Is Spinal Tap?
As the band's tour starts to disintegrate, lead guitarist Nigel Tufnel (Christopher Guest) suggests
resurrecting their famous "Stonehenge" stage act.  Lead singer David St. Hubbins (Michael McKean) is skeptical; they no longer have the required scenery.  Nigel insists, and begins sketching on a napkin as Ian (Tony Hendra), the band's manager, looks on.

When Ian receives delivery, he is quite surprised:

Ian:    This looks actually perfect. I mean it's, uh, the right
proportions.  It'll be this color right?
Artist: Yeah. Yeah.
Ian:    Yeah.  That's...that's...that's just terrific. It almost looks
like the real thing.
Artist: Well good.
Ian:    When we get the actual, uh, set, when we get the piece,
it'll...it'll follow exactly these specifications. I mean even
these contours and everything?
Artist: Um, I'm not understanding it. What do you mean "the actual piece?"
Ian:    Well I mean...I mean when you build the actual piece.
Artist: But this is what you asked for, isn't it?
Ian:    What?
Artist: Well this is the piece.
Ian:    This is the piece?
Artist: Yes.
Ian:    Are you telling me that this is it?  This is scenery?  Have you
ever been to Stonehenge?
Artist: No, I haven't  been to Stonehenge.
Ian:    The triptychs are...the triptychs are twenty feet high.
You can stand four men up them!
Artist: Ian, I was...I was...I was supposed to build it eighteen inches high.
Ian:    This is insane.  This isn't a piece of scenery.
Artist: Look, look. Look, this is what I was asked to build. Eighteen
inches. Right here, it specified eighteen inches. I was given this
napkin, I mean...
Ian:    Forget this!  %#@*  the napkin!!! Unwittingly, the band goes onstage to perform.  As it is lowered to the stage at the climactic point in the song, they stare in disbelief as dwarves dressed as druids dance around the model. 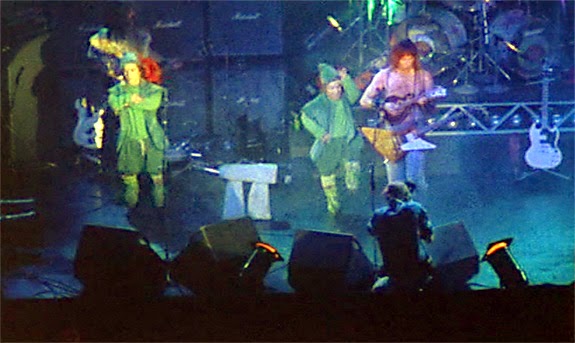 After the show:
David:   I do not, for one, think that the problem was that the band was
down.  I think that the problem may have been...that there was a
Stonehenge monument on the stage that was in danger of being
crushed by a dwarf.  Alright?  That tended to understate
the hugeness of the object.
Ian:     I really think you're just making a much too big thing out of it.
Derek:   Making a big thing out of it would've been a good idea.
Ian:     Nigel gave me a drawing that said eighteen inches.  Alright?
David:   I know he did, and that's what I'm talking about.
Ian:     Now, whether he knows the difference between feet and inches is not
my problem.  I do what I'm told.
David:   But you're not as confused as him are you?  I mean it's not your
job to be as confused as Nigel is.

I'd like to acknowledge Matthew Petty, a systems engineer who blogged about this last September.  I came across his post while looking for some pictures for mine.  (Thanks Matthew!)  He draws from this a lesson in Requirements Management, which he describes as, "How you ensure that what you build corresponds to what the customer is asking for."  Certainly a relevant "real world" application, whether we're the customer or the designer.
Of course, mathematically speaking, all is not lost for Nigel.  While he may not know the difference between feet and inches, he does know that eleven is one more than ten: