I suppose I should no longer be surprised when a simple estimation180 activity explodes into a full blown lesson.  Or lessons.  But ones filled with tissues?  A definite first.
Several months back, Theresa and I decided that we needed to start getting the third graders into the "estimation180" routine.  We wanted to get them comfortable with making number lines, coming up with "too lows", "too highs", and "just rights", and justifying their decisions.
So a few weeks ago, in Jane Garvin's third grade class, I threw this one up: 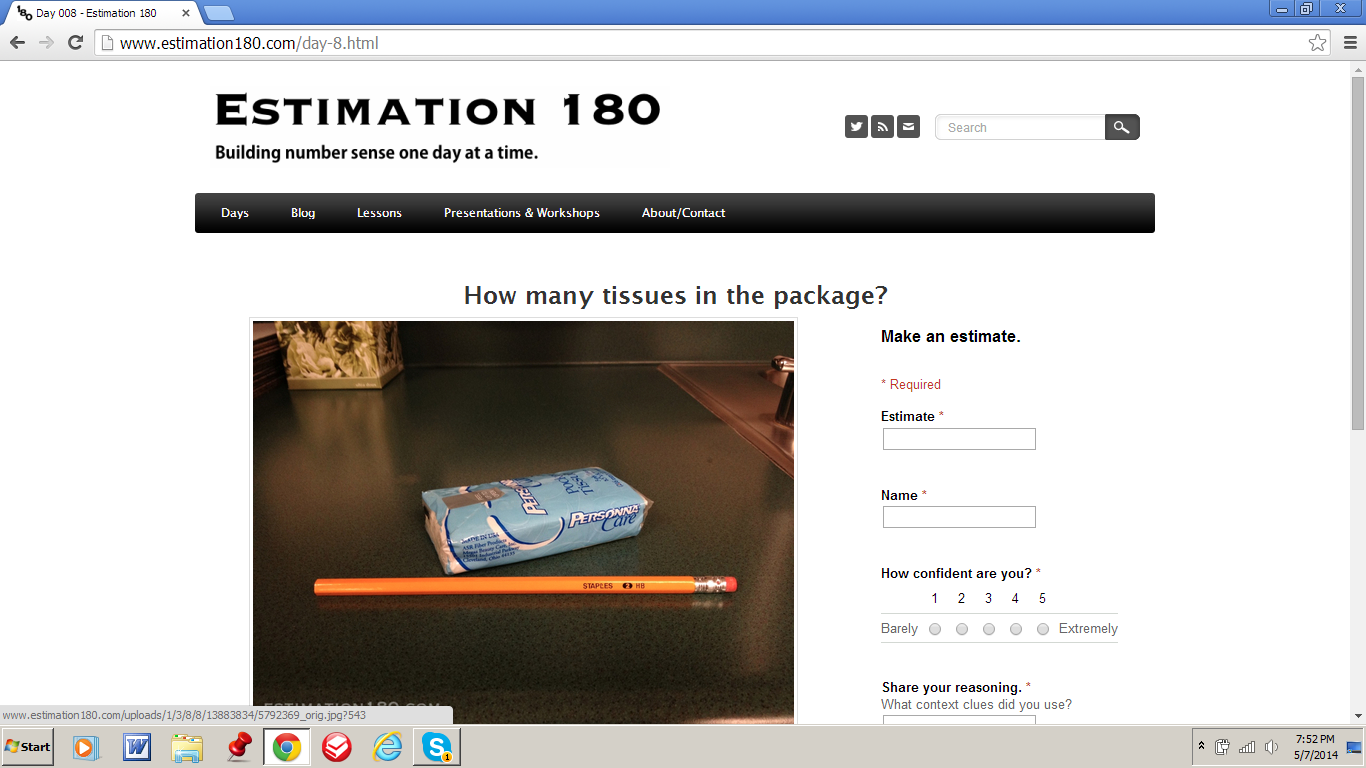 After giving them some time to get their work down, and doing some discussion, I showed them the reveal: 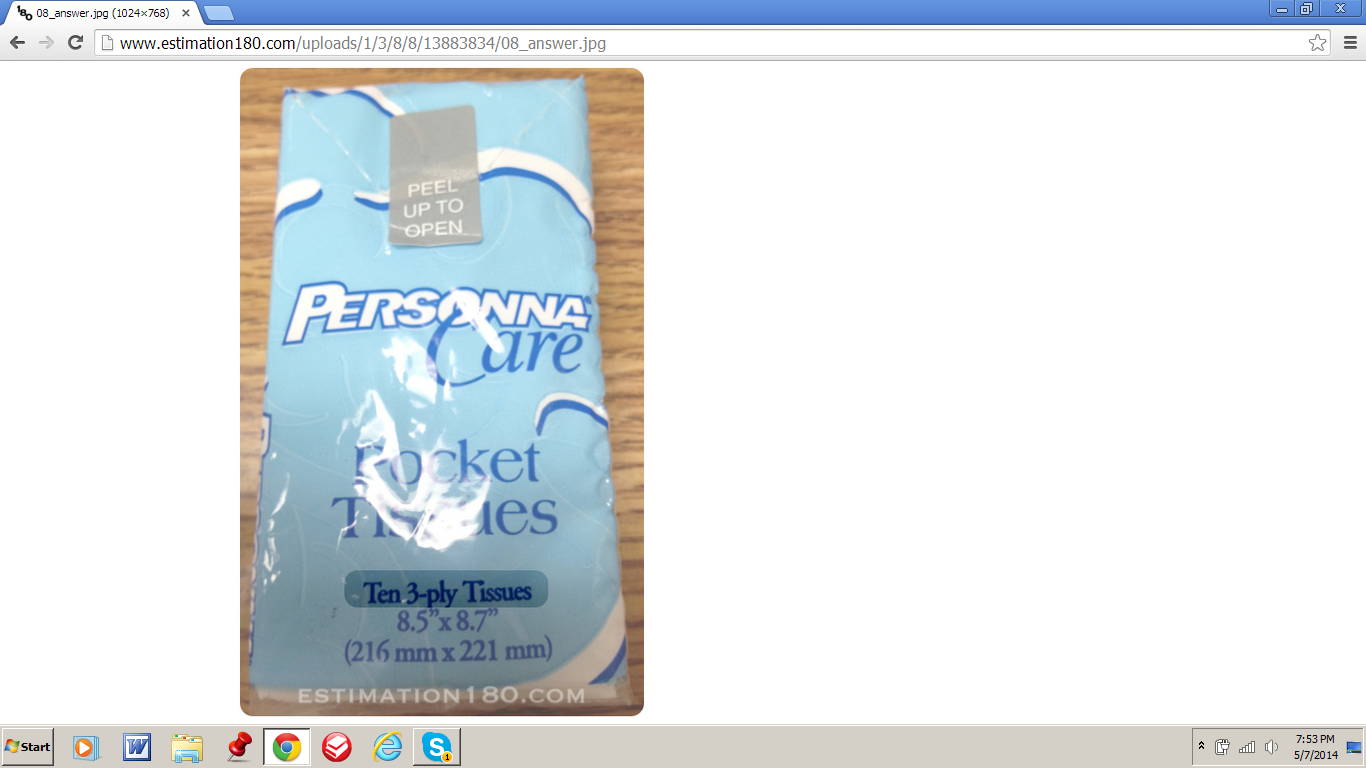 Some of the kids were surprised.
Kids: Only 10?  What a rip-off!
Me: Well, yes there are ten.  But it says on the package that there are Ten 3-ply Tissues.  What do you think that might mean?
Kids: ???????
Me: (as I searched for the classroom tissue box) It means that each tissue (and here I pulled one out of the box) is actually made of thin tissues stuck together.  This tissue is actually made of two thin tissues stuck together (I separated them and held up the thin tissues).  So this is a 2-ply tissue.
Kids: !!!!!!!!
Me: Why don't you think the company puts them in the pack that way?
Kids: Because if you blew your nose with one of those thin tissues the snot would come right through!

Now we were talking third grade language!  I taught this grade for many years, and knew that anything related to boogers would be met with great interest.  About as "real world" for a third grader as you could get.  I pushed on.

That was certainly fun.  But I knew there was something else there, and it was related to multiplication, an important grade 3 topic.  What if I gave kids their own personal pack of 10 3-ply tissues, and asked them to separate them all?  They'd have 30 1-ply tissues to mess around with, and could arrange and rearrange them into different combinations.
I asked Jane if I could steal her class for a period to try it out.  She agreed, and this is what we came up with:

Time was running out, and Jane helped me collect all the tissues.  Once all the kids were back in their seats, I asked them to talk about some of the different combinations they had found.  Here's what they came up with:

I returned about a week later.  I thought I would start them off with another estimation activity.  So we looked at this: 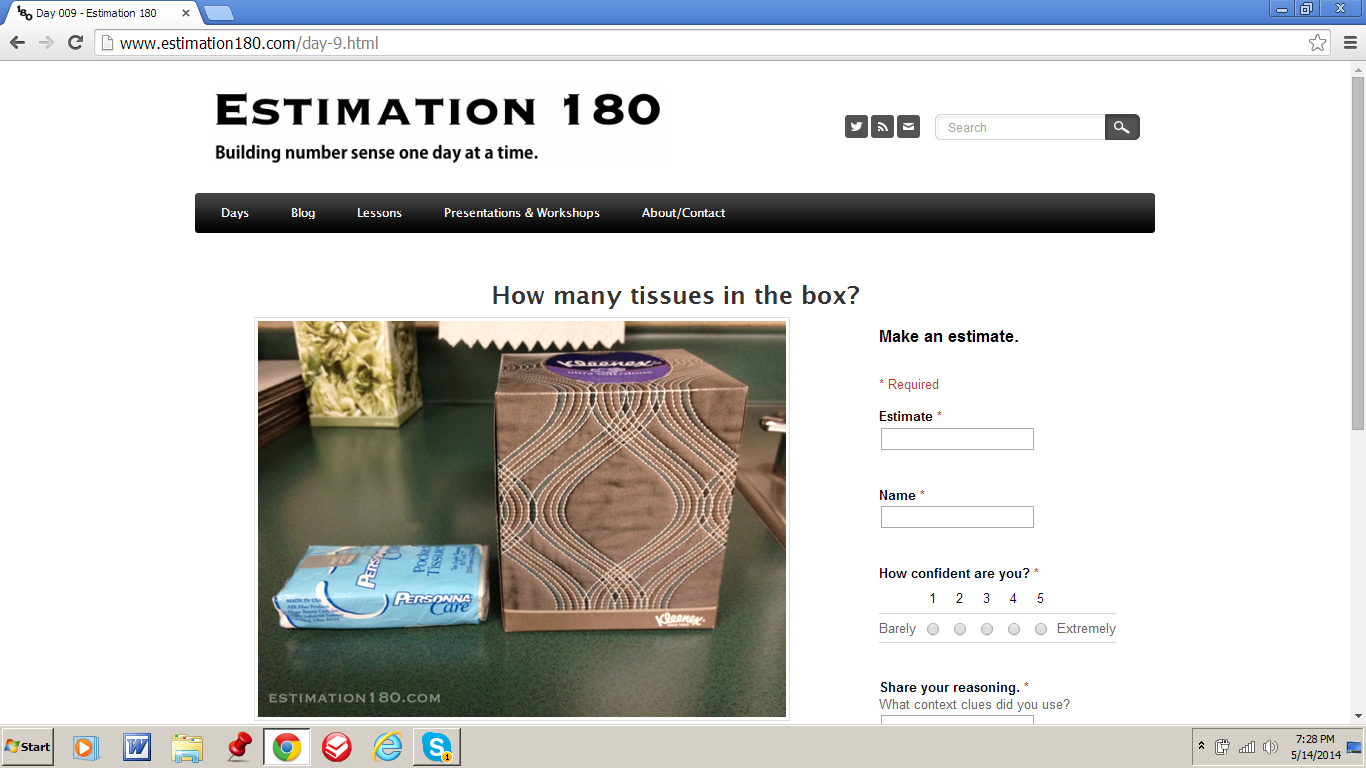 My plan was to move the kids towards using counters rather than tissues.  We discussed the difficulties they encountered working with the tissues: they crumpled easily, they flew around and got mixed up with the tissues from neighboring groups, they were difficult to count because they got stuck together...the kids came up with an impressive list.
"What could we use as a stand-in for tissues?" I asked.
"Counters!" they volunteered quickly.

Next came this question  What about 3 8-plys and 1 6-ply?  Is that an OK way to arrange the tissues?  They took a few minutes to debate this at their tables.  Some kids were bothered that not all the groups were equal; but most felt it was a perfectly reasonable option.  Time to get to work.

Again, the period was drawing to a close and we wanted to wrap up.  Thinking about the question Jane had asked regarding the 30-ply tissue, and the boy who had folded up 15 2-plys, I asked each group to share one of their combinations, and how practical the tissues would be if they came packaged that way.
"I have to come back one more time," I said to Jane.  "Then we'll be done.  In the meantime, get the tissues back out!"

Several days later I was back.  This time we started with the third and final activity in the series: 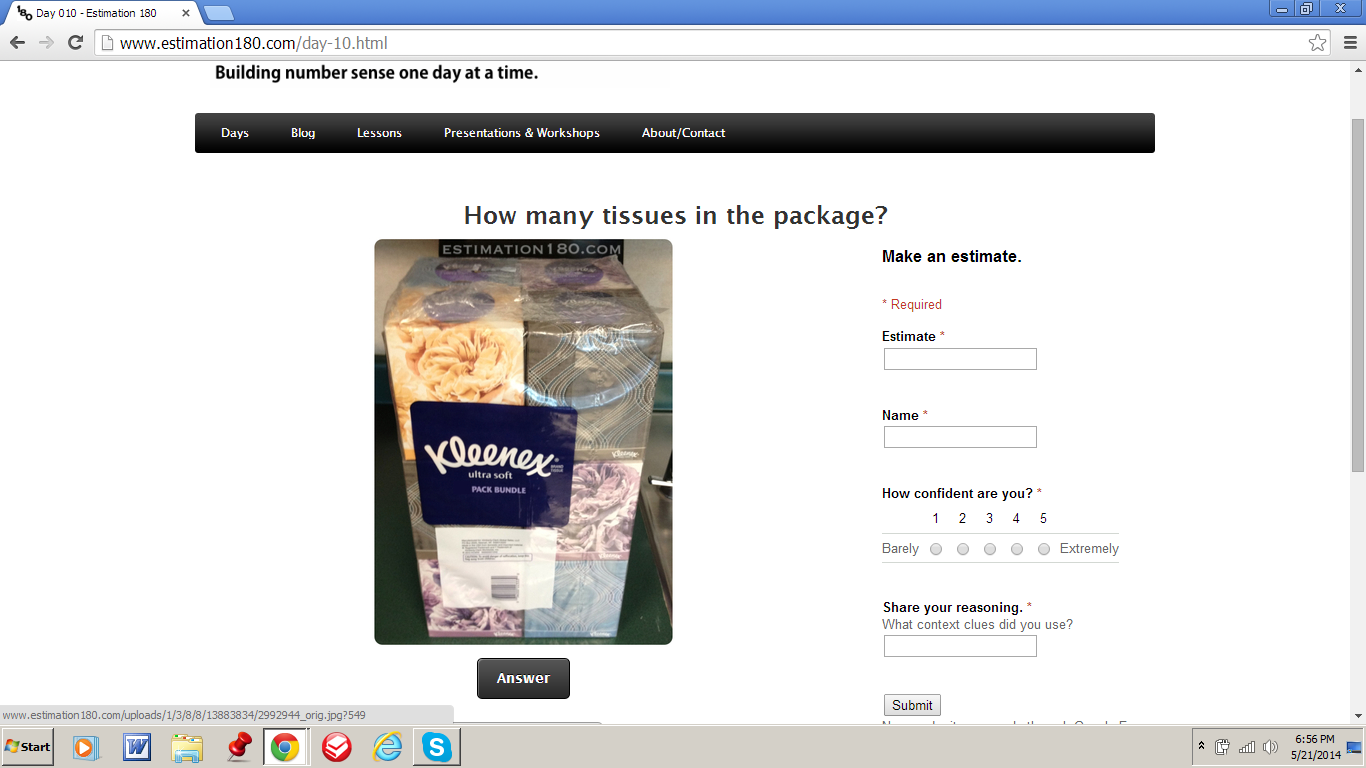 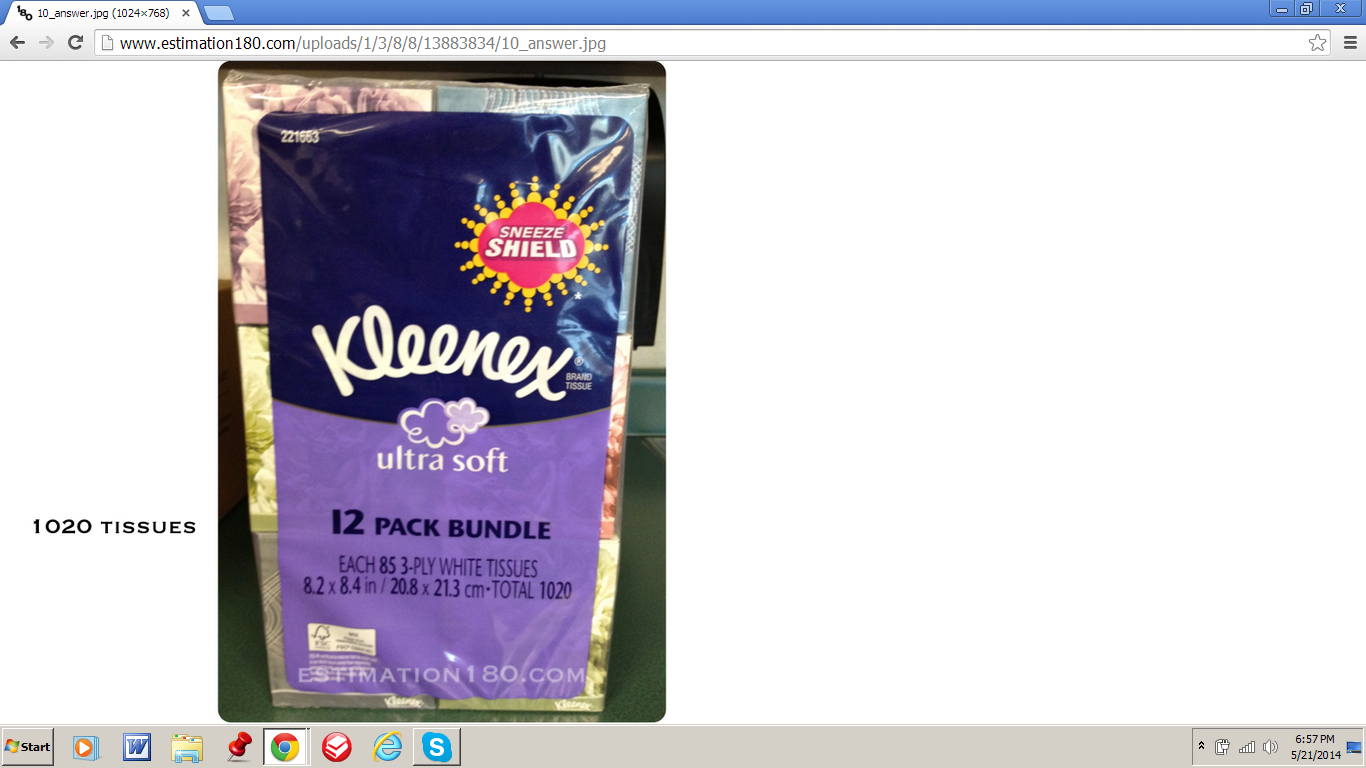 What I really wanted to accomplish in this third session was to focus on the first part of Standard for Mathematical Practice #3: "Construct viable arguments...".  I also wanted them to do a little writing, something I know I need to incorporate into lessons on a more regular basis.  So after giving back the posters and allowing them to do a little more exploring, Jane and I gave them the following task:

We know that personal tissue packs come with 10 3-ply tissues.  The tissue company has asked you to come up with a different way to package them.  Your group must come up with a recommendation to present to the company.

Jane gave each group their 30 1-plys back, and we told them to fold them up the way they wanted, as if they were going to put them back in the package.  They also had to write some sentences justifying their choice, and then present their decision to the class.  The groups came to consensus, and organized and folded their tissues.   After the previous lesson, I think they knew this was coming.
Jane and I could hardly wait to see what the kids would come up with.  We weren't disappointed; but we were surprised at the extent having a bloody nose haunts the minds of third graders.  Here were some of their combos:


The kids enjoyed sharing their proposals, and Jane and I had a hard time holding back our laughter. This time I remembered to have them give us some reflective feedback, which was overwhelmingly positive.  They described the activity as, "fun", "imaginative", and "exciting".  And who wouldn't love hearing those words used to describe math class?