Let's Go To the Movies!

If you haven't checked out the lessons and activities at Robert Kaplinsky's site, you should.  That's where we ripped off the highway sign activity, which I described here.  And don't miss his blog,  which is very thought-provoking and deserves a read.  Earlier this year Rich and I adapted his movie theater project and turned it into a week long problem solving exploration for our fifth graders.
We started by giving the kids a folders with the following information from the local multiplex:


We asked the kids to take a look.  They started reading each synopsis, talking excitedly about which movies they had seen and which ones they wanted to see.  They laughed about "Jackass Presents: Bad Grandpa".  They whispered about the "R" rated movies.  They debated the merits of seeing "Thor: The Dark World" in 3D.  They drooled over the snacks.  Rich and I exchanged a look.  The hook was baited, now all we had to do was reel them in.
I decided to use the strategy I had tried last year with Shannon's fourth graders.  They would create the problems themselves, and then solve them.  We borrowed a phrase from their ILA teacher: "thin questions vs. thick questions".  We encouraged them to write some questions that were straightforward and could be solved in a relatively easy manner (thin questions) as well as more challenging, complex problems (thick questions).  They started on their own, then met in small groups to discuss and refine their questions.


Groups got together and put their most interesting questions on chart paper.  Rich and I looked them over and selected about 15 for the class to work on.  They varied by topic and skill level.  I encouraged Rich to post them around the room.  The kids had several days to look them over before they were asked to dig in. This time, we assigned each question a letter and asked the kids to list their top 3 choices in their notebooks.  We gave them time during class to tour the room and take a careful look at each one before they made their choices.

The following day they entered the room and saw large, blank pieces of construction paper and markers along with the questions arrayed on desks and in corners all over the room.  They were told to get working on their first choice, but that if more than three people were already working on a problem, they were to try an alternate choice and come back later.  We also provided post-its in case kids wanted to provide comments.  Some worked alone, but most solutions were the result of collaborative efforts.

The student who wrote the question also provided an answer.  I'll let his work speak for itself. 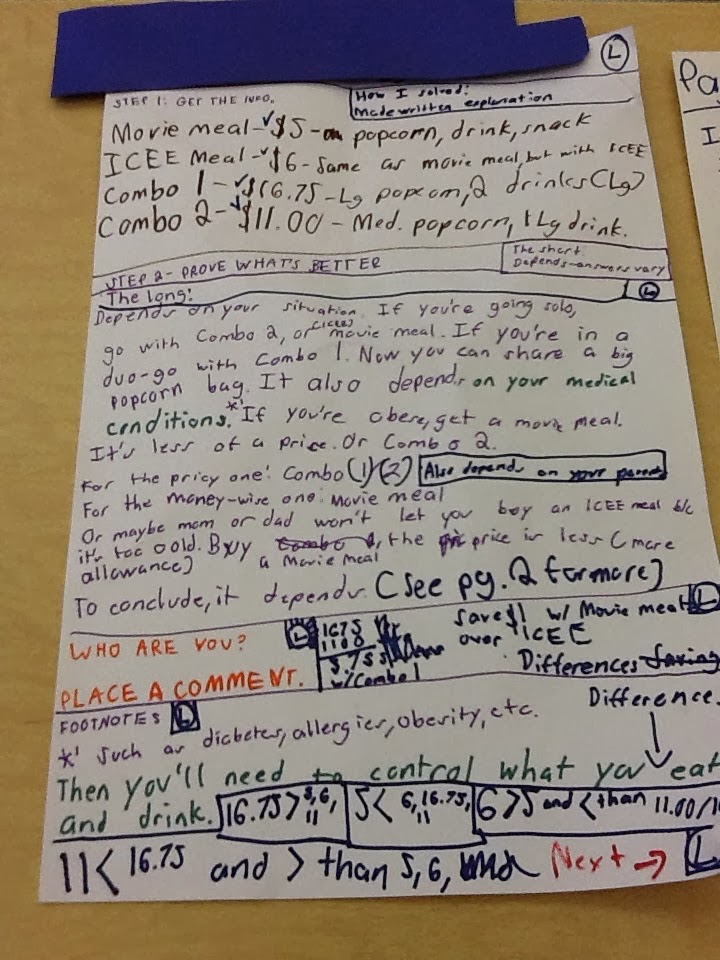 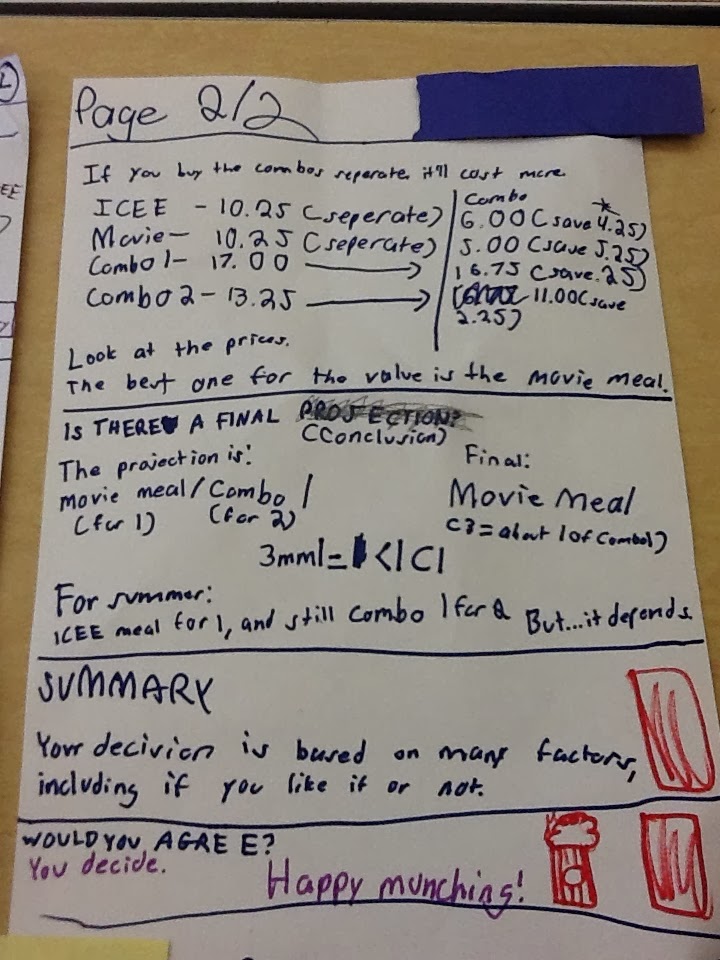 As the experience progressed from beginning to end, Rich and I engaged in a continuing conversation about what was happening.  Our reflections:

We liked this "movie theater" project so much that we started contemplating another, similar experience for later in the year.  Great Adventure anyone?
Posted by Joe Schwartz at 6:45 PM