Shamelessly copying the number sense activities at estimation180, I made my own and tried it out with a class of fourth graders a few weeks ago.  We have been working our way through the site, and the kids have gotten pretty good at giving us their wrong answers first (too low and too high) before settling in on their "just right".  Started with the photo of the clementine, had the kids record their responses (and we now have them place these on open number lines), then went to the video.  I stopped the video right after the clementine was peeled (around the 30 second mark) and asked if anyone wanted to adjust their prediction. 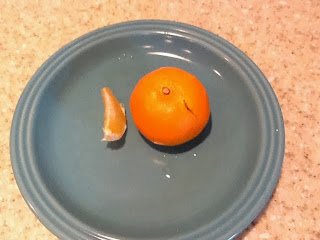 Most were close.  One boy guessed 8, and when asked why, he responded,
"I visualized 4 wedges in half the clementine, and then figured that there would be 8 in the whole clementine."
He then wondered how many wedges would be in half of this clementine, which was puzzling to him because it had an odd number of wedges.

We wondered whether all clementines had nine wedges, and agreed that this would be an interesting question to explore.  Would bigger clementines have more wedges?  This was another question that arose in the discussion.
The estimation180 activities have replaced our traditional "math message".  This was a problem or a number of exercises written on the board, generally practicing a skill that was taught the previous day(s), that the students were expected to solve in their notebooks as a "do now" upon entering class.  I have nothing to back this claim other than what my instincts and intuition tell me from anecdotal observations, but the opportunity cost has been worth it.  The rich discussions and the building of number sense, the digging into measurement topics and strengthening of measurement referents, shores up an area of weakness.  But the most important thing is: the kids love it.  We are playing around with the idea of borrowing a set of ipads that the kindergarten teachers got with grant money last year and having the kids make their own "estimation 180" activities from what they see around the classroom and around the school.
Posted by Joe Schwartz at 3:07 PM 2 comments: