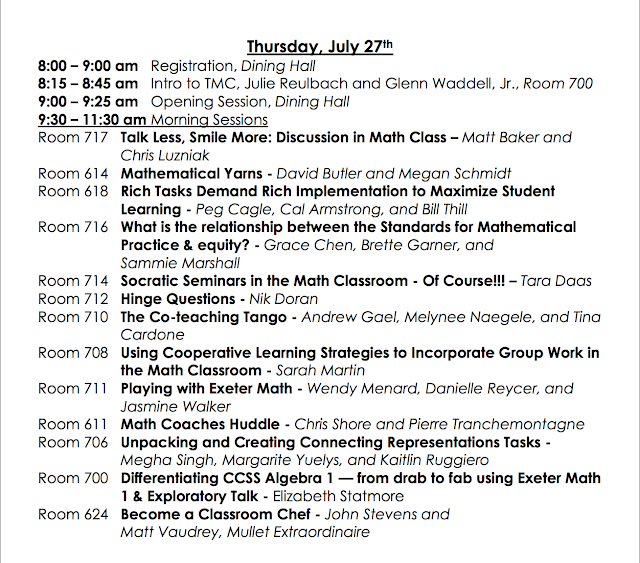 In the end there were two: Mathematical Yarns with David Butler and Megan Schmidt or Math Coaches Huddle with Chris Shore.  Veteran Twitter Math Campers know that your AM session choice is all-important, because the one you select is the one you commit to for all three mornings.  That's a total of six hours, so best choose wisely.  As much as I would have loved to spend that time exploring mathematics through the medium of hyperbolic crochet with David and Megan, it was Math Coaches Huddle that ultimately got the nod.  I'm going to be doing quite a lot of coaching in my new role, and who better to help me up my game than Chris Shore.
One thing for sure; I wasn't going anywhere near Room 711.  That's where Wendy Menard, Danielle Reycer, and Jasmine Walker would be running a session called Playing With Exeter Math. What I knew about Exeter Math I learned from Joel Bezaire: people sat around something called a Harkness Table and solved problems created at the very exclusive Phillips Exeter Academy that looked like this: 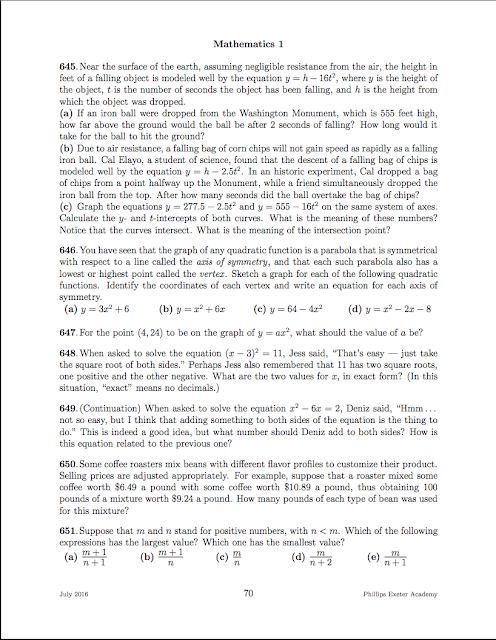 Who in the world could possibly want to solve these? And voluntarily too?!  Playing with Exeter Math?  Really?  To me it looked about as much fun as a root canal.  You want playing?  Playing was what I did in David Butler's Friday afternoon session One Hundred Factorial: Playful and Joyful Maths; a smorgasbord of puzzles and activities we could, according to the session description, "Follow down any rabbit hole that looked interesting."  And before we all made our way down to the cafeteria, which David had set up to look like a math amusement park, he explained that the goals of the session were: learning something, making or seeing something beautiful, understanding someone's thinking, and last, but definitely not least, sharing joy together.  Now there were some SWBATs I could get behind!  We weren't disappointed:

The contrast, in my mind, was stark.  One the one hand, Exeter Math problem sets: walls of text, a whiff of elitism, for the smart kids in the honors class.  On the other, David Butler's One Hundred Factorial: visually engaging, democratic, no experience necessary.  They were diametrically opposed.  I felt the two sitting on my right and left shoulders like an angel and a devil.
But if it's nothing else, Twitter Math Camp is a place where one can work out his or her math issues with no fear of judgment.  Which is how dinner on Saturday night turned into something of a therapy session.  Out with a bunch of TMCers at the Cowfish Sushi Burger Bar, I found myself seated next to Jasmine Walker.  I had worked with Jasmine on a Skyscrapers puzzle in the One Hundred Factorial session.  Jasmine had also helped facilitate the Playing With Exeter Math session.  Perfect! Looking for confirmation and affirmation, I asked her to compare the two.
"They're completely different experiences, right?" I asked.
"Not at all!" she exclaimed.  "I find the same kind of emotional happiness working on the Exeter problems as I do when I work on problems like Skyscrapers."
I was stunned.  It sounded impossible to me, but Jasmine went on to explain that, despite their outward dissimilarities, they actually had much in common.  Like the activities in One Hundred Factorial, the Exeter Math problems could lead to unforeseen and exciting places, and engender the same amount of joyful, raucous back and forth that we had experienced together in David's session. In fact, according to Jasmine, all of the goals David had set for his session got checked off in the Exeter Math session.  From his seat across the table, Jim Doherty, another One Hundred Factorial participant and himself an Exeter problem set veteran, did his best to come to my aid, but in the end pretty much echoed Jasmine's reaction to my question.
I've thought a lot about the conversation I had that night with Jasmine and Jim.  And what the experience has caused me to do is take a good look in the mirror.  I was angry with the Exeter problem sets.  Angry because they looked like all those word problems I had so much trouble with when I was in high school.  Angry because they reminded me of how inadequate they made me feel back then, and how inadequate they make me feel in the here and now.  Angry because they seemed so intractable, so cold, so bloodless.  I wanted them to change.  I wanted them to lower their barrier to entry, to turn themselves into something I could access, to be something I could share with Jasmine and Jim and Joel.  I wanted to be able to walk into Room 711, and I was angry because they were blocking my way.
But what I've come to realize is something I've known all along but been unwilling to truly admit: Exeter Math isn't to blame.  The one deserving of my anger is me.  I have to take responsibility for my own learning.  If I want to play with the big kids in Room 711 I have to learn how to do the math.  And to do that, I mean to really do it, I'd have to start back in middle school and go all the way up through Algebra 2.  Not quite Billy Madison, but pretty darn close. After I did that, I could decide for myself if solving Exeter Math problems was a rewarding activity or a waste of my time.  And I don't think I'd care either way, because the decision would be mine.  All mine.