In an attempt to make peace with the Exeter problem set, I followed Jasmine Walker's advice: 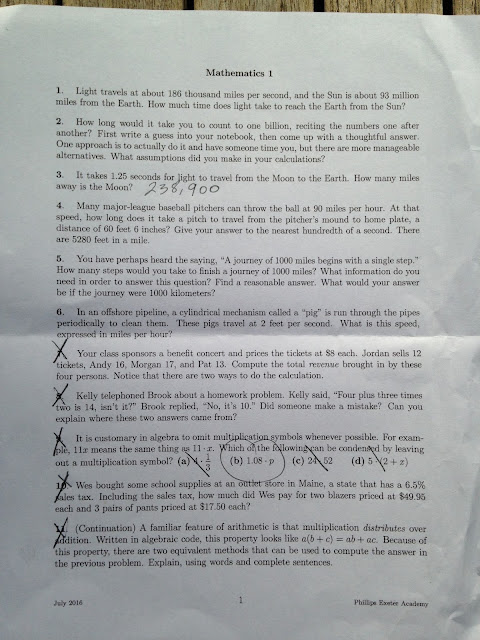 Problems 7-11 came pretty easy.  (Hopefully I didn't get any wrong!)  For #11 I didn't feel like writing an explanation using words and complete sentences, so I just drew a picture. 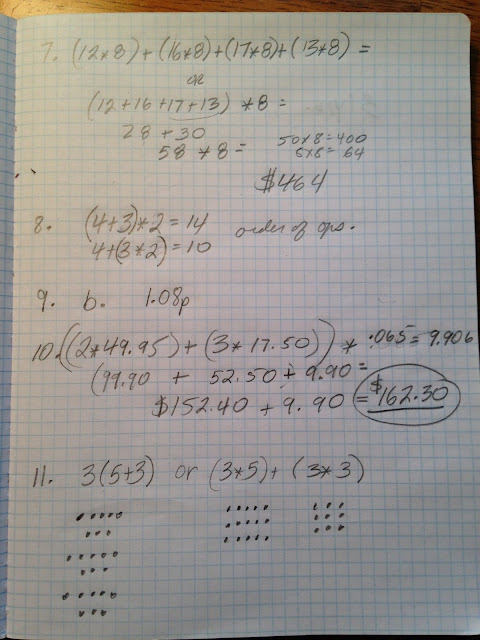 Problems 1-6 were another story: 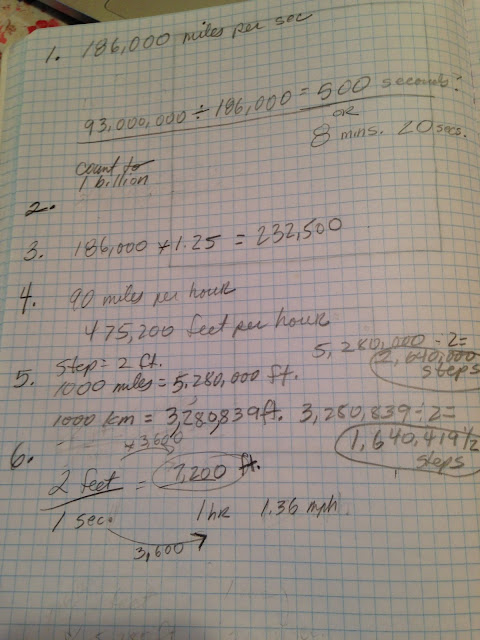 Problem #1
I didn't think my answer made sense.  I had the feeling that it took a lot longer than 500 seconds for light from the Sun to reach the Earth.  So I googled it.  I was right!

Problem #2
I knew it would take a really long time, and that I would have to consider that you have to breathe, eat, sleep, and go to the bathroom, and that different numbers take different amounts of time to say out loud.  It all seemed kind of overwhelming!  There's some interesting stuff about it on the internet, though.

Problem #4
Nope.  Couldn't do this one.  And I like baseball!

Problem #5
This one felt a lot like problem #2.  However I buckled down and gave it a go.  I figured on a step being about 2 feet.

Problem #6
Offshore pipelines?  Cylindrical mechanisms?  I nearly gave up on this one, but at the last moment before publishing this post I figured I'd give it another try.  But 1.36 miles per hour seems kind of slow, so I think I'm wrong.

To sum up:
Will I print out page 2 and start working on those problems?  Probably not.  If I'm going to solve problems like these, I need a little romance.  I need some help building intellectual need.  I can't always just gin it up on the spot.   I did my homework, but it felt like just that--homework.
This could be the heart of the MTBoS project: how do we (as teachers) take problems like these and turn them into something that a student might want to solve?  Not because it's assigned for homework, or because it's going to be on the test, but because he's curious to know the answer.  Is that putting a premium on answer-getting over sense-making?  Does this mean that deep down I'm an answer-getter, not a sense-maker? Do I have to be one or the other?  Or can I have some of both in me?  If needing to know the answer is the motivation for learning the math, does that mean the answer-getting impulse is something that should be cultivated?
Michael Pershan says that just like there are different genres of literature, there are different genres of math problems.  OK, so Exeter problems are not my genre.  But what genres do I like?  And what does that say about me?  The answer may lie in an experience I had at TMC '17.
Since the host site was not within walking distance of lunch options, on several days it was arranged that food trucks be brought to campus.  Feeding 200 people out of 2 food trucks was quite an operation; the lines were long and the Atlanta heat was unforgiving.  My hunger got the better of me, and I ignored the advice from my friend (and Georgia resident) Graham Fletcher to wait inside in the air conditioning until the line dwindled down:

For the first few minutes it actually felt good to be outside after spending all morning indoors.  I got a chance to talk to Annie Perkins, who was standing behind me in line, about her experience in the Playing With Exeter Math morning session.  She explained that it was a good opportunity to just work on problems, something she had trouble finding the time to do during the school year.   As we spoke, I started to feel the famed southern heat and humidity start to kick in, and I realized that the line had barely moved.   I began to have second thoughts.  Should I go back in?  Or have I reached the point of no return?  How much longer am I going to have to wait?  Will I get sunburn?  Heatstroke?  Maybe if I started to keep track of how long it took someone to receive his lunch, I would get an idea of how much longer I'd have to stand in line.  So, in part to pass the time and in part because I was just plain curious, I asked John Stevens, who had just placed his order, to guess how much time it would take for him to get his food.
"4 minutes and 29 seconds," he ventured.
As I looked down at my watch to check the time, I heard a voice behind me.  It was Annie.
"No, it won't take that long.  I've been standing here for twenty minutes, and..."
And here Annie launched into a very cogent mathematical explanation about why it wasn't going to take John 4 minutes and 29 seconds to get his food.  My brain, baking in the heat, couldn't quite follow, but it made perfect sense.  I forgot to look back at my watch, and by the time John had his food I was back inside, in the air-conditioning with Graham, who was kind enough to refrain from saying, "I told you so."
Should I have waited outside with Annie?  How long would it have taken me to get lunch?  How did Annie know?  It would have to depend on how long it took a person to get his food.  Would that depend on what he ordered?  Whether he paid with cash or a credit card?  If I could find the average time, and then multiply that by the number of people ahead of me in line, I could get a good idea.  It was nothing if not a math problem, but a problem that, unlike the Exeters, I was curious about.  I imagined what the problem might look like, written out and embedded inside a page of the Exeter problem set.  Would I have cared about it then?  Probably not, because it didn't come from inside of me.
Maybe one day I'll feel like Annie, and jump on the opportunity to solve problems like those in the Exeter set.  Right now I kind of doubt it, perhaps because there's too much scar tissue.   I'd like to be able to have the choice, and the measure of how bad I want it will be my willingness to suck it up, buckle down, and learn the math.  I won't rule it out, because if there's one thing I've learned it's to never say never.  Given where I've come from, who'd have ever thought that I'd be standing outside in the hot Georgia sun, in line to get lunch from a food truck, in the middle of the summer,  at something called Twitter Math Camp, on my own dime, and turning the experience into a math problem?  Believe me when I tell you: If that's possible, then anything's possible.


Posted by Joe Schwartz at 1:04 PM No comments: