Rooting For the Laundry

Ricky F.  was one of my very first students.  He was a bit undersized for a second grader, but more than made up for it with his boundless enthusiasm and energy.  As an NFL draft expert would say, the kid had a motor.  He also had a love of baseball and an intense dedication to the Chicago Cubs.

Chicago Cubs fans are not easy to find here in central New Jersey, where we straddle the line between Philadelphia and New York.  We've got Phillies, Yankees, and a smattering of Mets supporters, but Cubs fans are few and far between.  So naturally I was curious.  Why was Ricky a Cubs fan?  Did his family have Chicago roots?  Was Cubs fandom an ancestral heritage?  Was his Little League team the Cubs?  I had to know.

Turns out he was at home sick one day and by chance tuned into an afternoon Cubs game on superstation WGN.  On the mound for the Cubs was a portly pitcher with the same first name as him: Rick Reuschel.  That's it.  That's all it took for him to become a fan of the Chicago Cubs.  He knew nothing of their storied history, none of the famous players who had worn the uniform, or anything about their iconic ballpark.  (He also didn't know that the Cubs were the poster franchise for disappointment and failure-- they hadn't won a World Series since 1908.  If he had, he might've thought twice.)  It was simply a matter of fate.  He was home one weekday afternoon.  The Cubs, the last major league team to install lights at their home park and play night games, still liked to honor tradition by playing weekday day games.  In the 1980s, as cable proliferated, WGN fed Cubs games into homes all over the country.  The Cubs were in the field and Rick Reuschel was on the mound.  He heard his name and the rest was history.

My New York Yankee fandom is an ancestral heritage.  One of my earliest memories is sitting with my dad watching a Yankee game, and my dad pointing to the little black and white TV and saying, "That's Mickey Mantle."  The Mick was way beyond his prime, though I was too young to know that at the time.  (A lifetime later my dad joined his brother and three of their cousins at Yankee Fantasy Camp, where a broken down, alcohol-soaked Mantle was barely able to wobble onto the field.)

Mantle had retired before I saw my first game in person-- Tuesday, May 19, 1970.  I was in fourth grade, and my dad and my paternal grandfather took me to the old Yankee Stadium to see the Yankees play the Orioles.  It was a night game, and the view of the field as we came through the tunnel to our seats in the upper deck--so big, so green, all lit up in the dark Bronx night--took my breath away.  I think fell asleep in the seventh inning.  The Yankees lost, 5-1.

They lost a lot when I was a kid.  I came of age during what long-timeYankee fans refer to, not without a little lingering PTSD, as the Horace Clarke Years--a roughly ten year stretch from the mid 1960's to the mid 1970's where the team was mired in mediocrity.  The one bright spot was centerfielder Bobby Murcer, the heir apparent to Mantle.  (The parallels were eerie.  Both from Oklahoma, both converted shortstops, both signed by the same scout.)  So Murcer became my favorite Yankee.  I can remember my dad showing up to my Little League games straight from work, sitting in the stands with one eye on the field and the other on the Wall Street Journal.  On the car ride home he would prank me by saying, "Did you hear the Yanks traded Murcer?"  For a moment I thought he was telling the truth.  With a crushed look and tears welling up I'd turn and say, "Really?"  Then he would make up some ridiculous trade that I knew couldn't be true and we would laugh...until it really was true and Murcer really was traded-- to the San Francisco Giants for Bobby Bonds.  I was heartbroken and outraged, and threatened to leave the Yankees forever and become a Giants fan.  That's when my dad gave me the speech, which in today's terms we'd call the "rooting for the laundry" speech.  I stuck with them, and soon after they began their late1970s ascendency: a pennant in 1976 and World Series wins in 1977 and 1978.  We all sat--my mom and dad, my brother and sister, my grandparents--with our rally caps on rooting for the Yanks through exciting play-off and Series games.  Their success was made ever so much sweeter because I had suffered through such lean years. 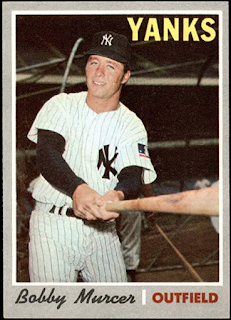 My daughter inherited her NY Football Giants fandom from me; I inherited it from my maternal grandfather.  He waxed nostalgic about Frank Gifford, Sam Huff, and the glory days of the 1950s; I came of age during the so-called "Wilderness Years", which again made the success the franchise achieved in the mid-to late- 1980s and early 1990s so very sweet and satisfying.  She came of age as a fan post- first decade of the 2000s, after the Coughlin Era Super Bowl successes, during what Giants fans are now experiencing as "The Wilderness Years Part 2."  Like me with Bobby Murcer, she latched on to what's been the only real bright spot during this time, the electric, controversial wideout Odell Beckham, Jr.  She loved his dynamism, his athleticism, his hair and his social media presence.  When he was traded to the Cleveland Browns she cried tears of fury and threatened to never watch another Giants game.  I trotted out the same speech my dad had given to me-- about how while it's natural to get attached to players, the hard truth is that players come and go, that ultimately you need to stick by your team regardless of who wears the uniform, and that one day they will be good again, and we'll watch them win a Super Bowl together, and all the heartbreak and pain we've experienced watching them lose will make the winning that much sweeter.  It took a lot of convincing, and she hates to lose, but she's hanging in there.

Based on his age at the time he was in my class, I figure that Ricky F. became a Cubs fan in 1984, during Rick Reuschel's second stint with the Cubs.  In 1985, the Cubs traded Reuschel to the Pirates.  This means that, even after the trade, Ricky remained a Cubs fan.  He continued rooting for the laundry.  In 2016, the Cubs finally won the World Series, their first in 108 years.  (They still hold the streak for longest World Series drought.)  I don't know what happened to Ricky F., but I hope he stayed a Cubs fan.  I estimate he'd have been in his late thirties on that early November night in 2016 when the Cubs, after being down 3-1, defeated the Cleveland Indians 8-7 in 10 innings in what some consider to be the most dramatic Game 7 ever played.  He'd have endured lots of heartbreak in the 30+ years since he first heard his name coming out of the television.  I hope he passed down his fandom to his son or daughter, and that they were sharing the sweet moment of victory and vindication with him, just as I hope to share that feeling with my daughter when the Giants win the Super Bowl again.

If you've ever known that feeling, you know there's nothing like it.

Posted by Joe Schwartz at 11:39 AM No comments: