"Who Wants To Count My Windows?"

Just back from spring break, with two days to fill before the start of PARCC testing.  What better time to have the fifth graders dig in to one of our all-time favorite projects: Ant Hotel. 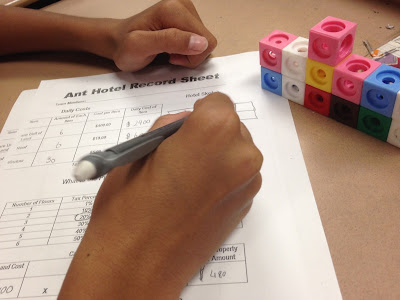 Ant Hotel is a modified version of the Fawn Nguyen/Andrew Stadel classic Hotel Snap.  The goal is to build the hotel that, given certain constraints and parameters, yields the highest profit.   (Read Fawn's post to get all the details.) We took one of her suggestions, and reduced the number of hotel rooms (snap cubes) from 50 to 12.  With an adjusted tax table and new recording sheets, we were ready to go. 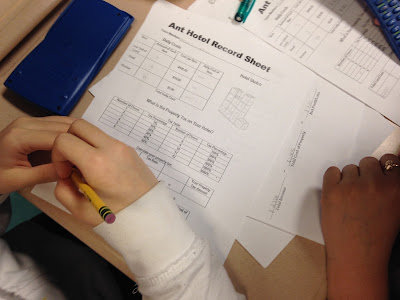 We divided the class into teams of 2 and 3, and explained the task.  We had each team build the exact same hotel, and modeled how to calculate costs, including how to count square units of land, windows, and roofs.  We unpacked the tax table, and explained how to compute the property tax.  (This is New Jersey, after all.)  On the profit side, we led the class through the process of counting and classifying rooms and then figuring out each one's value.  Finally, we determined the net profit by subtracting total cost from income.  All told, this took about 30 minutes.  The kids caught on quickly, and immediately set off to work.

There's a ton of great math packed into this activity, including: area, multi-digit addition, subtraction, and multiplication, fact extensions, decimals/percents, geometry in three dimensions, and counting.

Counting?  Counting is a skill that doesn't get much play in grade five, but it's a critical element here.  An accurate count of hotel windows (exposed vertical faces of snap cubes) can be the difference between a hotel making and losing money.  There were disagreements among team members, which led to one of my favorite scenes so far this year: a student, whose team could not agree on an accurate count, walking around the room, waving his hotel in the air, and pleading,
"Who wants to count my windows?"
Audible groans when the period ended, and the following day they couldn't wait to start back in. 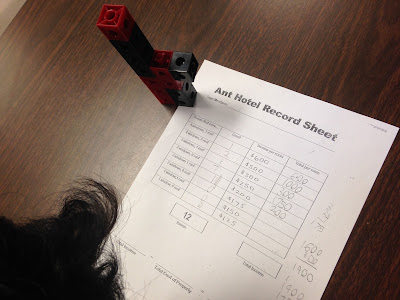 Teams built multiple hotels, and recorded their best efforts on the whiteboard: 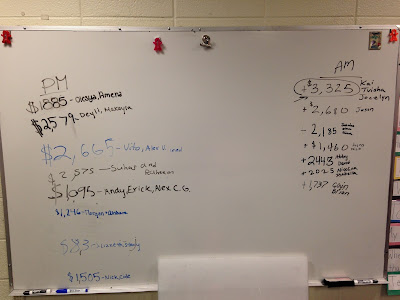 Over the course of the week, the kids clamored to continue the project.  Despite the schedule being upended by the standardized testing timetable, Rich found the time to accommodate both AM and PM classes.  To the sound of howls and groans, the whiteboard standings changed as top-earning hotels were toppled from their perch due to mistakes, most of them careless, in calculating tax and room values, as well as errors in counting windows and roofs.  (This is why a sketch is imperative: so the hotel can be recreated and checked.)  In one class, competition got a little too heated, and there were some hurt feelings when errors were exposed.  Note to self: give teams the opportunity to reexamine their work before submitting it to the scrutiny of the class.
This task has many things to recommend it.  Besides the math (both content and practice standards), it's hands-on and low-tech, and requires little prep.  So from all the kids (and their teachers): Thanks Andrew and Fawn!