More Hands on the Lever: 12 Hours in August

Last spring, when a supervisor asked me to present a summer workshop on how to implement 3-Act tasks and estimation180 in elementary classrooms, my first response was, "Theresa has to do it with me."  My second was, "We'll need more than just one day."  Theresa was ready and willing, the supervisor agreed, and here's how it got advertised:

In late June Theresa and I outlined our plan, using what we had learned from running our PLC.  We would have 12 hours over 3 days in early August.  Our audience would be a mix of  K-5 classroom teachers, district instructional coaches, and fellow math specialists.  Since all but 3 of the 24 teachers attending would have little or no 3-Act or estimation180 experience, I started to think of the workshop as "Intro to MTBoS", with the image of someone dipping their toe into the water.
We decided to start everyone off with a 3-Act, then work backwards and deconstruct the process by focusing on the important parts of Act 1: noticing and wondering and estimating.  We'd do a 3-Act each day, allow for plenty of discussion and text study, and build in time for teachers to find resources in the computer lab.
And then I went to Twitter Math Camp. 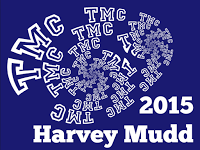 Everyone raising their hand paid for their room or travel to attend #tmc15. What do you notice and wonder? pic.twitter.com/nNOJfCNj6x
— Levi Patrick (@_levi_) July 25, 2015


Being immersed in that amazing community of 200 committed, smart, funny, passionate, and inclusive educators, and watching their presentations,  made me realize that what Theresa and I had planned just wasn't going to cut it.  We needed more.  Pumped on adrenaline, my mind raced most of the days and nights in Claremont:


@JSchwartz10a at least you got some sleep. My roommate liked to get up at 4am. @Veganmathbeagle @cmmteach
— Graham Fletcher (@gfletchy) August 6, 2015


I was determined to bring more of the TMC excitement back to New Jersey.  Fortunately, I still had about a week to prepare, and TMC attendee Brian Bushart was already running a PD session in his district and blogging about it.  Although I was afraid we might be pressed for time, Theresa agreed to two important additions:


Day 1:
We kicked things off with an extended quote from Tracy Zager's Shadowcon talk, "Breaking the Cycle".  Tracy was generous in allowing me to use some of her slides, and the sometimes hard to confront facts regarding elementary school teachers and math anxiety was put on the table within minutes of our 8:30 AM start.  Although I had made my own struggle with math anxiety public in a post last year, most of the teachers present were unfamiliar with my story, and I took the opportunity to recount my unpleasant experiences in school, complete with evidence:

During the discussion that followed, some participants admitted to similar experiences.  But I was struck by a comment from a fellow specialist.
"I never had any trouble with math in school," she explained.  "But I have vivid memories of watching classmates struggle after being called up to the blackboard to work out problems in front of the class.  I felt embarrassed and ashamed for them."
It was a perfect lead-in to Tracy's Shadowcon slide,  which I used to define our mission:

After setting the table, we had them jump right into our first 3-Act, Andrew Stadel's classic File Cabinet:


After a break, and a discussion centered around the notes they had taken, we began deconstructing Act 1 by turning our attention to noticing and wondering.  The notice and wonder prompt is so simple, yet so incredibly powerful.  As the very first step in the 3-Act, it starts the entire process by providing the task with its focus question.  The better a class is at generating mathematical wonderings, the more likely they are to generate the necessary focus question.  That's why I wanted teachers to see it as a discrete activity, one that can be used in a variety of ways.

We practiced with pictures... 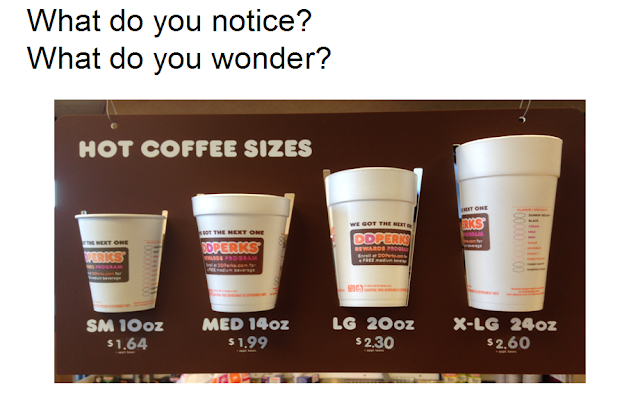 And then turned our attention to one of my pet peeves: the traditional "math message".  We explored what it would be like to tweak math messages with a notice and wonder prompt: 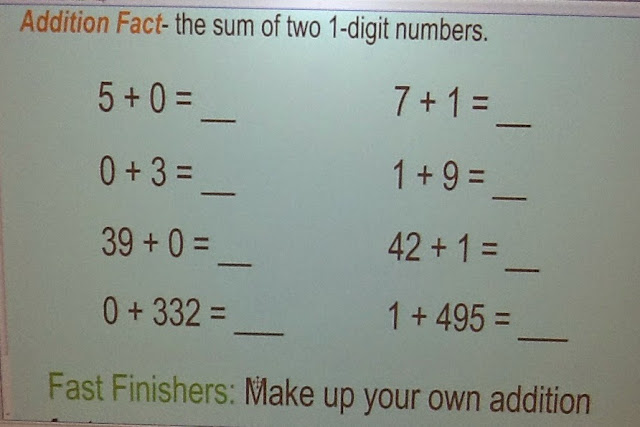 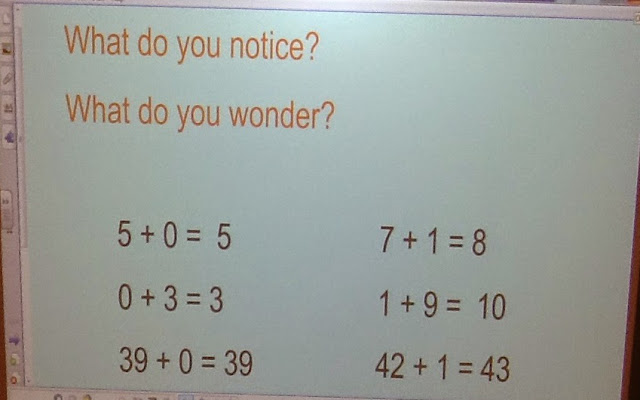 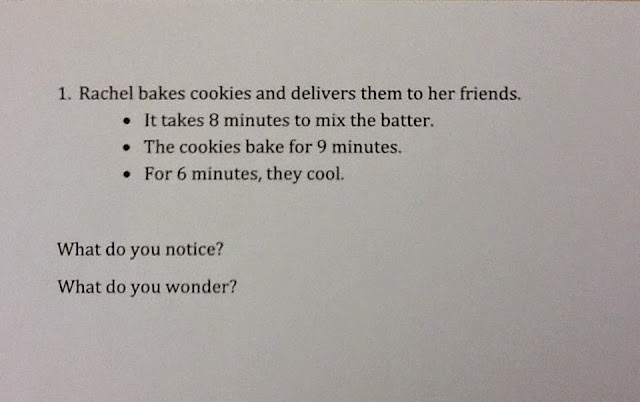 We even explored using the prompt to introduce games:

At this point, we felt they were ready to meet Annie Fetter.  We took a look at her Ignite talk, Ever Wonder What They'd Notice? (if only someone would ask)


By then the teachers were ready to head over to the computer lab.  Their assignment: get in grade level teams, look over the new Everyday Math on-line Teacher's Guide, and find a math message, game board, or other resource and change it by adding a notice and wonder prompt.  But before they left I gave them their homework assignment: Take a picture that might inspire some mathematical noticing and wondering, and e-mail it to me.
Within five minutes after the session ended, I had 3 teachers submit pictures.  By 10 PM that evening, 23 out of 24 had completed their homework.  I felt that the response was a good sign that the teachers were excited about the session.

Theresa and I decided to start Day 2 by introducing the group to Dan Meyer, the originator of the 3-Act task. Four years ago I happened to stumble on  Dan's Ted Talk Math Class Needs a Makeover, and watching it (along with reading Paul Lockhart's A Mathematician's Lament)  was my Road to Damascus moment.  It has over 2 million views, and I joked that at least 1 million of them were mine:


We acknowledged the enthusiasm everyone brought to their homework assignment, and I asked the group to look at this submission:


We then turned our attention to a math message that one of the fourth grade teachers had found the day before:

We finished up our exploration into noticing and wondering with some text study, and here I chose this user-friendly guide provided by The Math Forum.
The day's 3-Act was Lisa Anglea's Piggy Bank (Found here in the Georgia Frameworks, Grade 3, unit 1, pgs. 57-62.)  This is a favorite of mine; I used it in all our grade 2 and 3 classrooms last year. The noticings and wonderings were decidedly more "mathy", a tribute to all the work we had done. And rather than random groups, Theresa and I decided to allow the participants to work with whomever they pleased.
Another benefit to using Piggy Bank was the fact that two of the teachers in the workshop had seen the lesson in action, and were able to explain exactly how it played out in their classrooms.  And I had brought along some student work samples I had collected and saved.  The anecdotal observations from fellow classroom teachers, plus the look at the samples, sparked a lively discussion, and helped the participants visualize what a 3-Act would look like in their classrooms, as well as realize that implementing a 3-Act was not really as complicated or intimidating as some of them may have thought.
After a break, we turned our attention to estimation180.  As readers know, I've lived and breathed this for several years.  Open number lines, too highs, too lows, and just rights, justifiable reasons, discussions, embedded content...it is, as Graham Fletcher says:

As an introduction, I chose to work the group through Day 116 (as an example of a standard task with a picture reveal), Day 98 (as an example of a task with a video reveal that would allow a teacher to pause the video periodically for students to reevaluate), and Days 51-53 (as an example of a series).  I also showed them some homemade tasks collected on our district's shared drive.  Since we had grade levels K-5 represented, we had a discussion about appropriate expectations and implementation.
Before letting the teacher's loose again in the computer lab to explore the site and find tasks they'd like to use with their classes, I introduced them to man behind it all, Andrew Stadel:


We gathered back together and I had the teachers share what they had found.  The excitement and energy that had been building all day was evident in their enthusiasm for what they had discovered, and I knew that they were looking forward to the final day.  And that was a good thing, because we needed one more day to seal the deal.

Day 3
Theresa and I decided to start Day 3 by putting the hammer down.  We took a slight detour from the workshop description and introduced the participants to this signature MTBoS activity... 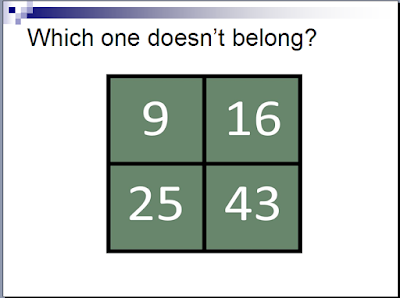 WODB is emblematic of what I think of as "the MTBoS ethos": low floor/high ceiling, engaging, multiple correct responses, virtually impossible to be wrong, embedded content, tasks submitted by teachers, collected on a site created and curated by a teacher (Mary Bourassa), and completely and totally free of charge.
The participants loved it.  I mean, it's hardly fair.  I don't care what kind of teacher you are, or how long you've been at it, or what grade you teach: if something like this doesn't make you wish that school was in session so you could try it right away with your class, then I don't know what will.
We tried several more examples, at which point I thought they'd like to meet another important MTBoS figure, and one who'd been integral in popularizing the WODB task: Christopher Danielson.

For their final 3-act, Theresa and I chose Graham Fletcher's Shark Bait.  There were kindergarten and first grade teachers present, and we felt that it was important they see a task designed with their students in mind.  Theresa and I had given this one a workout in our kindergarten classrooms last spring, so it was familiar and we knew what to expect.  And again, this time cribbing from my blog post, we had work samples to look at, discuss, and help teachers visualize what it would look like in practice.  (Note to self: Next time make sure you bring a supply of unifix cubes.)  With three 3-Acts now under their belts, we felt they were ready to do some text study, and here we chose the Effective Instructional Practices Guide from the Georgia Frameworks, which includes a wonderful guide to implementing these lessons.
With roughly 2 hours left, the teachers were eager to get into the lab and work with their grade-level colleagues to find 3-Act tasks. Theresa and I guided them to several of our "go-to" spots: the incomparable Georgia Frameworks, Dan's 101qs, and both Graham Fletcher's and Kyle Pearce's 3-Act collections.   We circulated among the working groups answering questions, and offering advice, opinions, and encouragement.  There were excited cries as teachers found meaningful resources, and I was glad that they were beginning to feel the thrill of MTBoS discovery that by now I knew so well, but that still gives me the feeling of, "I wish I had some kids in front of me right now so I could try this out!"   It wasn't easy getting everybody back.  But I still had some important business to conduct.
Many teachers volunteered to share what they had found.  Even though they wouldn't be in front of students for another month, I felt optimistic that at least some of the learning would stick.  We took a look back at the slide that I used on Day 1 to frame our work:

I made my pitch:


I talked about the incredible colleagues...

...and the support, encouragement, and growth they would find there.

The final word went to Justin Lanier.  His passionate and humane Ignite talk said everything I wanted to say, only more eloquently:


In his talk, Justin paraphrases Archimedes: "If you give me a lever long enough, and a place to stand, I can move the world."  Justin likes, "The optimism and the vastness of that vision," and so do I. And I think he would agree that the more people we can get pushing down on that lever, the more likely it will be that the world will move.