"Nobody Puts Kindergarten in the Corner!"

If the MTBoS has a signature teaching move, it's got to be the 3-Act.  It incorporates so much of the MTBoS ethos: noticing and wondering, estimating, premium student engagement and student-directed learning, collaboration, low floors and high ceilings...a good 3-Act wraps it all up in one beautiful  package.
Created and spread by middle and high school teachers like Dan Meyer, Andrew Stadel, and Kyle Pearce, until somewhat recently the pickings have been slim for us primary grade folk.
Enter Graham Fletcher.  Graham has worked on developing 3-Acts for the elementary school set, and he hasn't neglected kindergarten.  One look at Shark Bait and I knew I had to give it a spin.  So last month, armed with some baskets of unifix cubes... 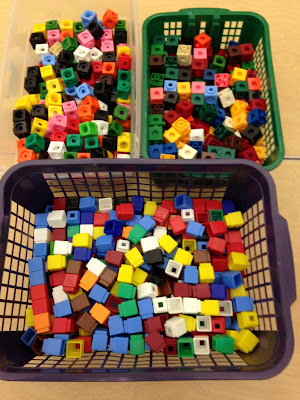 ...I set off for kindergarten.

Seated on the carpet in the front of the room, the kindergartners engaged immediately.  I mean, aren't worms right in that 5 year old wheelhouse?    They clamored for another viewing, and another one after that.  I had them do some noticing and wondering:

and, finally, the focus question:

I had the kids make some estimates, which got recorded on the board:
ACT 2: The Work

I explained to the kids that I was going to give them some clues to help them figure out the answer.  In a true 3-Act, the students would need to request the information; here I decided simply  to provide it.  It was their first experience, and I did not want the task to become too overwhelming.   Here's what Graham provided for Act 2:


Their teacher and I had discussed whether or not to read it out loud.  The teacher felt the students still might have some difficulty, but I wanted to see what would happen if we just handed it out.  So I asked the kids to go back to their tables, distributed the clues, and let them have at it. 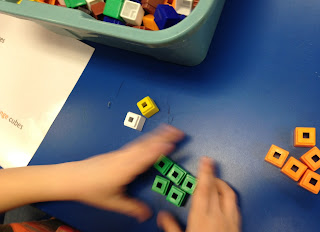 They got right to work. 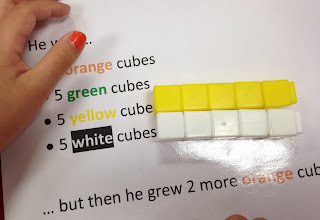 There was very little problem.  The struggling readers got help from their classmates.

The kids brought their unifix cube worms back to the carpet for the reveal:


We counted the cubes, both by ones and by fives (plus 2) and established the correct answer as 22 cubes.  The kids who had forgotten the extra oranges went back to their baskets and retrieved the missing cubes, and kids that had too many put the extras back.  Again, they insisted on viewing the video several times, and paid careful attention at the end as the worm began to extend.

ACT 4: The Sequel
What's a 3-Act without a sequel?  For this task, I wanted the kids to draw and then measure their their own worms, using whatever combination of cubes they wished, then record the results, using whatever way made sense to them.  They dug right in!

It was time for me to go, so I had the kids come back to the carpet for a final activity: a counting circle, from 1 to 22 and then backwards from 22 to 1.  To follow up, I encouraged the teacher to try having the kids order their worms from smallest to largest.

Act 5: The Reflection
I had several thoughts looking back on the lesson:

One final reflection: The 3-Act lesson, which reflects so much of what's good about MTBoS project, has another huge selling point: its adaptability.  So while the mathematics of the task changes to reflect the competencies and standards attached to the particular grade level, the core template remains the same.  From kindergarten through high school and beyond, it's something every math teacher should have in his or her tool kit.